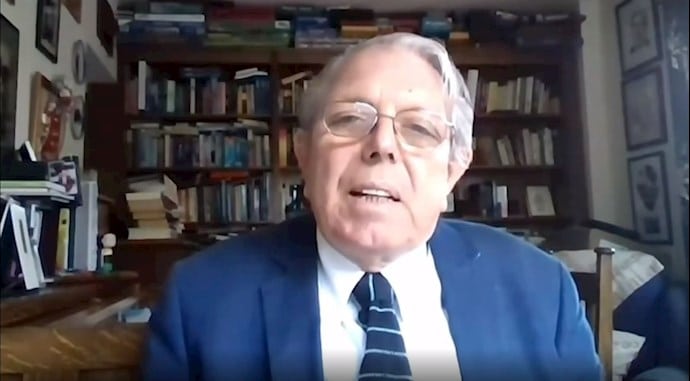 Sir Alan Meale, a former Member of Parliament from the United Kingdom
Simay-e Azadi, an Iranian opposition satellite TV channel, aired several interviews with renowned politicians on Thursday. These interviews coincided with the second session of the trial of Assadollah Assadi, Iran’s diplomat-terrorist, and his three accomplices in Antwerp, Belgium. Assadi used his diplomatic privileges to transfer explosives from Tehran, on a commercial airliner, to Europe, to give it to his operatives to bomb the Iranian Resistance’s “Free Iran” gathering in Paris in 2018.

Prior to his arrest, Assadi was stationed in the regime’s embassy in Vienna, working as the third secretary of the embassy. Assadi, like Iran’s other diplomat-terrorists, is an official of the regime’s Ministry of Intelligence and Security (MOIS).

The 2018 foiled bombing plot and the obtained pieces of evidence, along with the regime’s history of using its diplomatic missions for terrorism, once again highlight the need to shut down the mullahs’ embassies.

This demand was echoed by Sir Alan Meale, a former Member of Parliament from the United Kingdom, during his interview with Simay-e Azadi on Thursday. Sir Alan was among hundreds of renowned politicians who attended the “Free Iran” gathering in Paris, held by the National Council of Resistance of Iran (NCRI) on June 30, 2018.

The following is the full text of Sir Alan’s interview:
Thank you very much for asking me to participate in response to this, what’s happening on this most important day today is important because the [Belgian] courts are going to rule in that summit. So on the final day of the terrorist actions in that court hearings now, and let me say what’s important, that I should respond to this, because I was actually present on the 18th of June in 2018, I was present at an event, a rally for a free Iranian movement, which was attended by many tens of thousands of people, all justly and rightly opposing what we’re hearing on a daily basis of torture, imprisonments and murders in the country. And how well was intended. Was it only me that I intended? No, it wasn’t. It was up to. And international lawmakers from America, from all over the world. In fact, as I recall, there were 19 different countries represented by lawmakers at the events. It was a very serious event. Now, what occurred was very, very clear evidence that four people with the help of the diplomatic sources, the Iranian diplomatic service were involved in the attempted terrorist activities, which, if they’d been successful, could have caused thousands of injuries and deaths.

Now, this is a very, very serious indeed, because for the first time in decades, we saw an international government, diplomatic services involved in terrorist or attempted terrorist activities. Now, as the court has been hearing, and I have no doubt the judgement will be clear, this is a very serious matter, not just for the Iranian regime, but countries throughout Europe, the rest of the world. It’s a serious breach of diplomatic protocols, which attempted, and it could have caused many, many losses of lives. And one of the international protocols is very clear and says that no government should participate in terrorist acts against another government on their soil at all. Now, that is in clear breach and therefore, because they’re in breach, I think the government has got to respond in a number of ways, as have other countries throughout the world, in particularly Europe, where 19 of the lawmakers were present on the day and actually on the soil of France, which has to respond accordingly.

And what I think they should do is immediately close the diplomatic embassies in Europe, particularly in Paris and London. They should expel the diplomats from there. And I should say, I think they should cease direct diplomatic relations with that country. And last but not least, they should contact the U.N. and demand the same, not ask the same demand that they do exactly the same until they change. Give guarantees that you won’t repeat such actions, and they will stop murdering imprisonment, torturing the people of Iran. They won’t have any recourse to any action activities in their countries. And last but not least, the most important things the world is got to wake up to the fact that this regime is evil, and they’ve got to recognize they’ve got to recognize that they have no role in the international community. Therefore, they must proscribe them. And last but not least, the most recognized, the free Iranian sources and courses out there. In particular, Madam Rajavi actually offers the only sensible alternative and recognize that as much of the international community has already done and is seen by the attendance of over 200 lawmakers from out the world at the Paris event, ask them to do that in the interests of freedom.