On the invitation of the Arab-Islamic Committee in Defense of Ashraf, a large meeting was held on Saturday, September 4 (during the last week of the month of Ramadan), at Carrousel du Louvre in Paris. The session was entitled “Islam against fundamentalism and dictatorship, an advocate of popular sovereignty.” More than 1,000 political, social, parliamentarian, and religious figures from 12 Arabic and Islamic countries, including Iraq, Egypt, Palestine, Afghanistan, Algeria, Kuwait, Yemen, Jordan, Senegal, Mauritania, Lebanon, Morocco, as well as Muslim representatives in France took part in the event. The keynote address was given by the National Council of Resistance of Iran’s President-elect, Mrs. Maryam Rajavi.

In a speech entitled, Islam against absolute clerical rule and an advocate of popular sovereignty and democracy, Mrs. Maryam Rajavi mentioned three decades of the clerical regime’s injustices against the Iranian people and emphasized: The theory of velayat-e faqih [absolute clerical rule] has no basis in Islam and has been rejected by Shiite and Sunni religious authorities. It is only used as an instrument to usurp power and preserve it. By referring to Koranic verses and the manner of living of the Prophet, she said: contrary to what the fundamentalists and especially Tehran’s rulers say, governance is the clear right of the people and must be respected, according to Islam. Freedom of opinion, choice, and people’s vote are among the inviolable rights that the Koran has repeatedly underscored. The barbaric and cruel sentences imposed on people by fundamentalists, especially those in Iran, under the banner of Islamic laws, are full of inequality, misogyny, religious discrimination, and human rights violations. They have no relation to Islam. 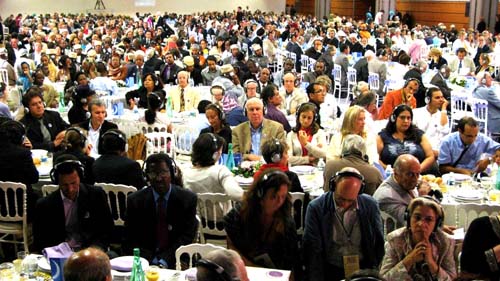 The session underscored support for the positions expressed by Mrs. Rajavi. It also backed a statement signed by the majority of Egyptian parliamentarians and highlighted the following points:

1. Fundamentalism and the velayat-e faqih offer a distorted view of Islam to the world are fully contradictory with the spirit of a compassionate and tolerant Islam. The session condemns the suppressive actions and crimes that are committed under the banner of Islam, especially the execution of dissidents for “moharebeh” (enmity with God).

2. The session underscores the imperative of protecting the lives of Ashraf City residents, the anti-fundamentalism Muslim women and men who are subjected to threats by the Iranian regime and its proxies in Iraq. The session also insists on respecting the residents’ status as protected persons under the Fourth Geneva Convention and calls on the United Nations to install a team of observers at Ashraf.

3. The American government, as a force that supervised the disarming of Ashraf residents during the Iraq War and subsequently assumed responsibility for their protection, is responsible for any potential tragic occurrence against the 3,400 residents of Ashraf. On this basis, the session demands the establishment of American forces inside Ashraf in order to ensure the protection of the residents as well as the protection of the UNAMI observers.

4. The session stresses that after the July ruling of the Court of Appeals for the District of Columbia, which suggested the illegality of the terrorist listing of the People’s Mojahedin Organization of Iran (PMOI/MEK) by the US State Department, there are no excuses to continue this unjust listing. The label does not only harm the PMOI and the Iranian people but deals the heaviest blow to anti-fundamentalist Muslims everywhere. When the PMOI, which is a precursor and organized movement that advocates a tolerant and democratic Islam, is described as “terrorist,” this constitutes the biggest help to the real terrorists, the fundamentalist movements, and the terrorist states such as the Iranian regime. It is an affront to Muslims everywhere. The PMOI members in Ashraf are, in our view, role models for tolerance, democracy and a genuine interpretation of Islam.

5. The session calls on Arabic and Islamic countries to enact urgent measures to end the siege of Ashraf and to remind the Iraqi government of its obligations for respecting the rights of Ashraf residents. 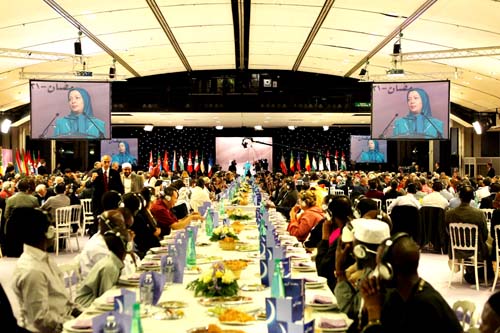 Background:
The Arab-Islamic Committee in Defense of Ashraf, where 3,400 members of the main opposition People’s Mojahedin Organization of Iran (PMOI/MEK) reside, was founded in 2009. It is chaired by Mr. Sid Ahmed Ghozali, the former Prime Minister of Algeria.