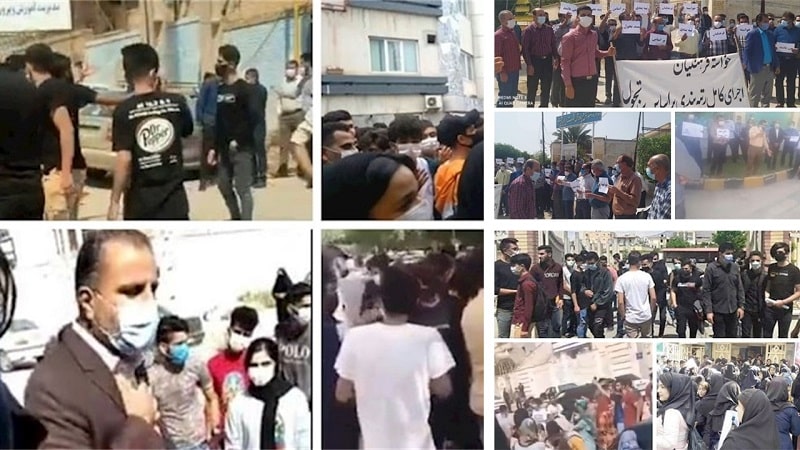 Reports tallied by the People’s Mojahedin Organization of Iran (PMOI/MEK) indicate there have been several protests in recent days across Iran by different walks of life. These protests are due to harsh living conditions and coronavirus outbreaks under the mullahs’ regime.

On Sunday, Iranian pensioners and retirees of the social security organization held their nationwide protests. They went to the streets again, protesting the unbearable living conditions and the below-poverty line salaries. In Tehran, repressive forces and plainclothes agents gathered in front of the Social Security Organization to prevent the formation of the retirees’ protest rally.

They chanted: “Only by taking to the streets, we can get our rights,” “Our salary is in rials, while our expenses are in dollars,” “Social Security, the name does not match the doings,” “Retirees stand up against oppression,” “We are facing the Coronavirus crisis, and discrimination and nobody (the regime) cares about us,” “We will not vote anymore, we have heard too many lies,” “Down with Rouhani,” and ” Imprisoned workers must be released.”

In addition to retirees, Iranian students have been continuing their rallies across Iran, protesting the regime’s decision to hold the in-person exams amid the Covid-19 pandemic. Students in dozen Iranian cities gathered in front of the Education Departments. They chanted, “We do not want the in-person exams.”

On Sunday, several pharmacists in Yazd, Mazandaran, Tehran, and Isfahan held a rally to protest the increasing of the privileged prices of pharmacies.

On Monday, official oil workers and employees held a rally in front of the regime’s parliament demanding their rights. Workers demanded higher wages. In addition to workers, the oil industry retirees also announced their intention to join the rally. Simultaneously those workers who were not able to join the rally in Tehran gathered in front of the National Oil Company in Ahvaz.

On Monday, Sepahan Cement employees held a rally demanding their delayed paychecks and special bonus. Since Ghadir Holding, which belongs to the Revolutionary Guards (IRGC), took ownership of Sepahan Cement, it cut off all the benefits of the employees.

On Tuesday, teachers from across Iran held a rally in front of the regime’s parliament for the third consecutive day, protesting the Ministry of Education’s refusal to employ them.

There are over 25,000 teachers who have passed the employment test with high grades, and the ministry of education must employ them, but it refuses to do so.

The rising trend of protests in Iran within the last four months shows the regime’s intention of creating a barrier against social protests by using the Covid-19 has failed. Slogans chanted in these protests underline that the Iranian people consider the regime as the country’s only