Reports tallied by the Iranian opposition, People’s Mojahedin Organization of Iran (PMOI/MEK), indicate more protests by different walks of life across Iran. These protests are due to the regime’s economic mismanagement, which has put immense pressure on all Iranian people.

Drivers of fuel tankers who had been on strike for ten days continued their strike on Saturday, December 5, in the cities of Arak and Kermanshah, and other cities and terminals. The drivers, who often transport fuel to Iraq, have gone on strike to protest low fares and demand higher fares.

Iran – Drivers of fuel tankers on strike – December 5, 2020
They said: “Due to the high cost of spare parts, especially wheels, as well as the current high costs of food, we cannot make a living with this amount of rent, and we will continue to strike until our demands are met.”

The number of striking tankers is more than 500 at the border of Marivan, Bashmaq terminal, Qasr Shirin city, Parviz Khan terminal, southwest Iran, and in Arak’s cities, Hamedan, and Kermanshah.

On December 5, a group of workers of the Yasuj Freight and Passenger Transportation Organization in southwest Iran gathered to protest the non-payment of their wages.
“We are fifty workers under the supervision of Yasuj Central Municipality. We are serving the people in the passenger terminal of this city, and at present, the company officials have not paid our wages for about eight months,” said the protesting workers.

“In the current economic situation, even if a worker receives a wage, they will not be able to make ends meet, let alone us, whose wages have been delayed for months,” workers said.

In another development, on Sunday, December 6, workers of the Isfahan steel company in Isfahan province held a gathering, protesting their low income, rampant inflation, and the authorities’ mismanagement in resolving people’s livelihood issues. 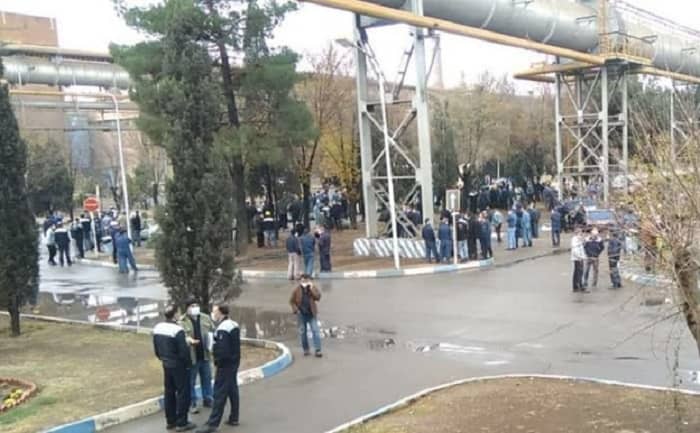 Workers of the Isfahan steel company hold a protest – December 6, 2020
On Sunday, academic staff and faculty members of Mahshahr Azad University, in southwest Iran, held a protest gathering in front of the university’s main building for the second consecutive day. They are demanding their unpaid salary for last month and an annual salary increase. 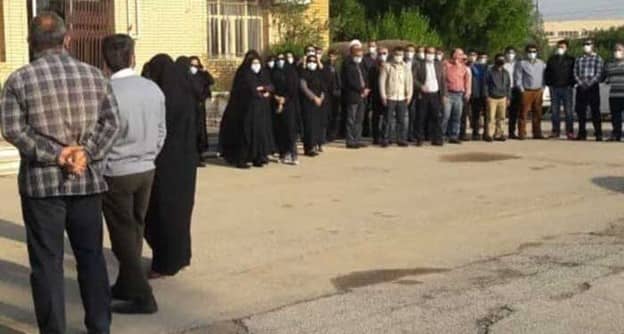 Academic staff and faculty members of Mahshahr Azad University, Iran, hold a protest gathering – December 6, 2020
“We are reaching mid-December, but we have not received our salaries for November and the arrears of the first six months of this year,” said one of the protesters.

On Sunday, a group of Tehran University’s Ph.D. students gathered in front of the university’s 16th Azar building, named after Iran’s national student day. These students who reside in married dormitories protested the university decision to evacuate dormitories amid the Covid-19 pandemic. 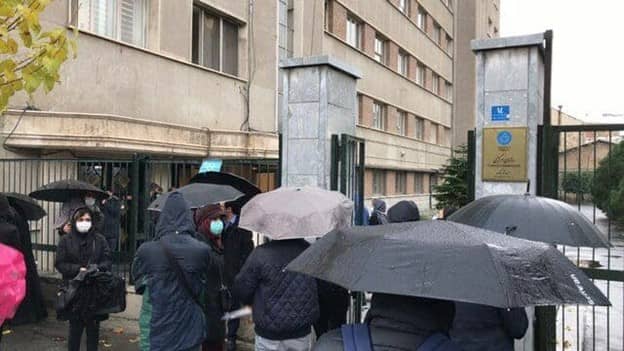 Tehran University’s Ph.D. students gathered in front of the university’s 16th Azar building – December 6, 2020
On Monday, December 7, several cattle breeders in the city of Shahr-e Kord in Chaharmahal and Bakhtiari province, southwestern Iran, held a rally in front of the local office of the Ministry of Agriculture Jihad, protesting the lack of livestock inputs.

In a parallel development, a group of workers in Izeh country in Khuzestan province, southwest Iran, protested for the second consecutive day for not receiving their wages for months. 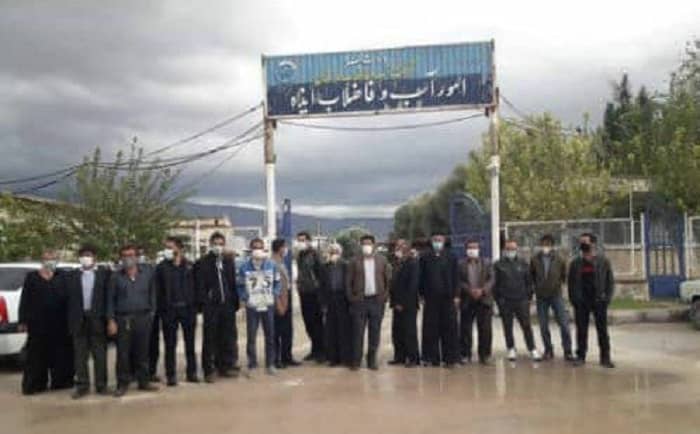 Workers in Izeh country in Khuzestan province, southwest Iran, protest for the second day – December 7, 2020
These workers, who are protesting the negligence of the Water and Sewerage Department officials and not receiving their wages for four to five months, gathered in front of the company and chanted slogans, demanding their salaries to be paid.

The regime has no intention of resolving the Iranian people’s economic issues. People must grapple with both the Covid-19 outbreak and poverty.

All the while, Reuters recently revealed the regime is spending $600 million to expand the holy shrine of Imam Hussain in Iraq. This action is not due to the mullahs’ religious sentiments; rather, it is meant at expanding the regime’s ominous influence in Iraq.

The regime prioritizes the export of terrorism over people’s wellbeing. Thus, in all protests, people consider the regime the only reason for their economic and social hardships.