Mrs. Maryam Rajavi, NCRI’s president-elect said at Ashraf- 3: Our nation has never ceased to rise up and revolt; it will undoubtedly achieve freedom and reclaim the usurped people’s sovereignty
Written by Secretariat of the National Council of Resistance of Iran (NCRI)

Maryam Rajavi: Our nation has never ceased to rise up and revolt; it will undoubtedly achieve freedom and reclaim the usurped people’s sovereignty

In remarks at a gathering of members of the People’s Mojahedin Organization of Iran (PMOI/MEK) at Ashraf-3 in Albania,

marking the anniversary of the 1979 anti-monarchic revolution in Iran, Mrs. Maryam Rajavi, the President-elect of the National Council of Resistance of Iran (NCRI), said: That revolution was the continuation of the Constitutional Movement and Dr. Mohammad Mossadeq’s nationalist movement, and was replenished with the blood of the PMOI and other combatants who were executed by the Shah’s secret police, SAVAK, in the 1970s. Unfortunately, the Shah’s suppression of the nationalist and democratic movements paved the way for the usurping of the 1979 revolution by Khomeini and his band of clerics. Western policies helped Khomeini to consolidate his monopolistic rule. But our nation has never ceased to rise up and revolt; it will undoubtedly achieve freedom and reclaim the usurped people’s sovereignty.

From the outset, the MEK rejected the mullahs’ reactionary mindset, did not vote for Khomeini’s constitution, which was based on the principle of the absolute rule of the clerics, and opposed the mullahs’ misogyny, Sharia law, and repressive policies, Mrs. Rajavi said.

The NCRI President-elect added, the November 2019 and January 2020 uprisings confirmed the Iranian people’s readiness to overthrow the ruling theocracy and to take a giant leap toward a democratic and pluralistic Iran. By offering 1,500 martyrs, the people of Iran demonstrated that they are prepared to pay the price of freedom. These uprising dealt devastating and irreparable blows to the clerical regime such that they cannot restore their lost stability and equilibrium.

NCRI-FAC
✔
@iran_policy
Ali Khamenei ordered a deadly crackdown on #IranProtests in order to save his regime from collapsing. This resulted in over 1500 martyrs, 4,000 injured &12,000 arrests. In addition, to conceal its crimes against humanity, the Iranian regime imposed an internet blackout.

View image on Twitter
20
22:16 – 30 Dec 2019
Twitter Ads information and privacy
28 people are talking about this
Mrs. Rajavi recalled that in 1979, the ceaseless protests by people in various cities brought about the Shah’s overthrow. And, now, the same uprisings that show no signs of abating, despite the clerical regime’s brutal suppression, and, with the assistance of Resistance Units and the Army of Liberation, will bring about the Sheikh’s overthrow. Resistance Units represent the torches of those uprisings and rebellious youth are leading the way for greater and more decisive uprisings. 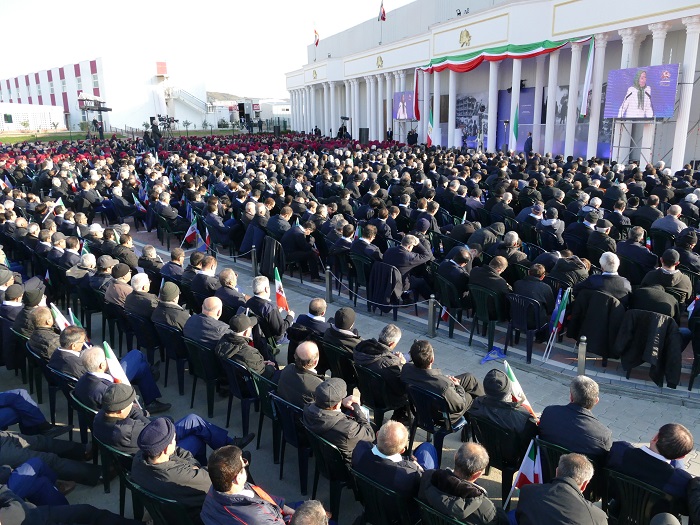 She emphasized Khamenei is trying to fill the reactionary parliament with absolute loyalists because he sees closing ranks as the only solution to deal with the current crisis. But, whether he succeeds or fails in this endeavor, in the end, the clerical regime has no way out and cannot forestall its overthrow. The Iranian people have cast their real votes during the November 2019 and January 2020 uprisings. This vote is summarized in the slogans of “down with the principle of velayat-e faqih,” “death to Khamenei,” and “death to Rouhani.” And on this basis, the people will boycott the mullahs’ illegitimate parliamentary election more than ever before. The boycott of the sham election is a patriotic duty and the bond of the Iranian people with their martyrs, especially the over 1,500 martyrs of the November uprising. The laws that this parliament has ratified over the past 40 years have served and will serve no purpose other than increasing suppression, misogyny, and plunder, which are contrary to the people’s interests and therefore null and void. All of the regime’s parliament deputies are among those involved in the regime’s crimes and treachery.

Maryam Rajavi
✔
@Maryam_Rajavi
Fearing widespread boycott of sham election, today, Rouhani repeatedly implored the people to not stay away from the polls. As a patriotic duty,Iranians are determined to boycott this farce, as their bond with martyrs, especially the 1,500 martyrs of the Nov. 2019 uprising. #Iran

166
12:21 – 11 Feb 2020
Twitter Ads information and privacy
147 people are talking about this
Mrs. Rajavi concluded her remarks by saying, the NCRI is the flag-bearer of the regime’s overthrow and the persistent advocate of the most important principles and values needed for the demarcation against this regime and for establishing a future democratic Iran. Now, it is high time to establish an Iran free from any form of dictatorship; an Iran devoid of torture, execution, and religious and gender discrimination. The time has come to establish a republic based on the free vote of the Iranian people, based on the separation of religion and state, and based on pluralism, justice, and equality.

Secretariat of the National Council of Resistance of Iran