French MP André Chassaigne, who kicked off the Paris meeting at the Colbert Hall, expressed concern about the human rights conditions in Iran. “The human rights situation in Iran is catastrophic,” Chassaigne said, drawing attention to more than 3,600 executions in Iran during the presidency of Hassan Rouhani, the self-proclaimed “moderate” president of the mullahs’ regime.

Chassaigne also pointed out to the ongoing demonstrations across Iran and the regime’s efforts to quell protests through sheer violence, arrests and threats of execution. “We call on the French government to firmly condemn the violation of human rights in Iran,”

“In this country, we value the rights of women, liberties and human rights,” said MP Sonia Krimi. “In my country of origin, I experienced the absence of freedom. We must listen to the call for freedom,” said the MP, who originates from Tunisia.

“The EU has stated that it’s probable that the Iranian regime has been involved in assassinations on European soil and it is necessary that we adopt an according policy toward the Iranian regime,” said MP Hervé Saulignace. Saulignace also praised the people of Iran, especially women and youth, who have had a leading role in nationwide protests that have been ongoing across Iran in the past year.

“France’s strength will be in standing with the people of Iran in their quest for freedom,” concluded Saulignace.

“It’s an honor to be with you. I’m here because I’m a woman and under the totalitarian regime of Iran, being a woman entail suffering,” said MP Sylvie Auconie. “The Iranian regime is a international problem. The Parliamentary Committee for a Democratic Iran must become more engaged.”

Maryam Rajavi, President of the Iranian opposition coalition National Council of Resistance of Iran (NCRI), called on the French government to initiate a bold policy in the EU that places France and Europe shoulder to shoulder with the people of Iran and respects the Iranian people’s struggle for freedom and democracy.

“The regime’s overthrow which is the desire of the people of Iran has never been so much within reach,” she said.

The mullahs’ regime of Iran launched a massive terrorism/assassination campaign in Europe through the course of 2018.

“The mullahs are badly in need of political and commercial relations with Europe. Nonetheless, they cannot forgo terrorist operations in the heart of Europe because they are much weaker than is conceived; they do not know of any other way but to suppress and to create crisis,” Mrs. Rajavi explained.

Despite claiming to be a “moderate” and enjoying support by pro-appeasement parties in Europe, Rouhani’s report card speaks for itself. 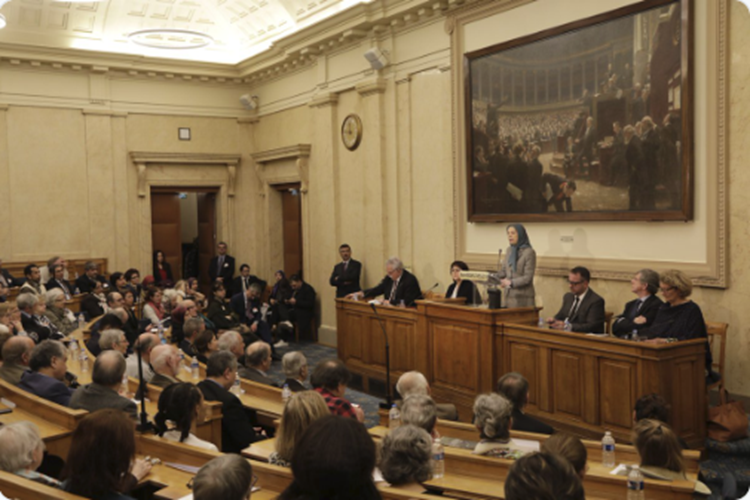 “Let’s look at Rouhani’s record: Thousands of executions; massacres in [PMOI/MEK camps] Ashraf & Liberty [when in Iraq]; wasting of Iran’s revenues on wars in the region; terrorist operations by the Ministry of Intelligence and Security (MOIS) under his command; and the Revolutionary Guards’ (IRGC) missile program, which have impoverished the majority of people in Iran,” she continued.

“A significant development in Iran has been the formation of Resistance Units. These units are made up of members and supporters of the Iranian Resistance who come from among Iran’s younger and freedom-loving generation,” Mrs. Rajavi added in her reference to the vast network of PMOI/MEK Resistance Units inside Iran that are encouraging the people’s daily protests in their drive against the mullahs’ regime.

“The policy of appeasement of the mullahs must be terminated. Tying hopes to investments in and commercial deals with Iran is an illusion,” she emphasized.

Regime change in Iran by by the Iranian people and their organized Resistance will not result in regional destability, Mrs. Rajavi added.

“The main obstacle to Iran’s progress and the main cause of wars and crisis in the region will thus be removed,” the NCRI President warned.

“We enjoy our people’s support in establishing a republic based on the separation of religion & state, gender equality, abolition of the death penalty, an independent judiciary, autonomy for ethnic groups, a foreign policy based on peaceful co-existence, and a non-nuclear Iran.”

“You represent the true alternative, and you have our support,” said MP Frédéric Reiss, addressing Mrs. Rajavi. “We question the EU, which continues to believe in the virtues of dialog [with the mullahs’ regime]. I support the struggle for freedom in Iran.”

“The regime in Iran is religious dictatorship that wants to dominate the Arab-Islamic world. The Iranian Resistance defends democracy not only in Iran, but in the entire region,” said former Algerian Prime Minister Sid Ahmed Ghozali.

In the past months, there’s been increasing attention on the destructive role that the Iranian regime is playing in the Middle East and across the world. A large ministerial conference held in Warsaw last week shed light and focus on the threats the Iranian regime poses to global peace and security.

“In the past 40 years, the Iranian regime has executed more than 120,000 political prisoners, including 30,000 in 1988 alone,” Ghozali said, reminding the audience of the abysmal human rights record of the mullahs.

In the past year, the Iranian regime has engaged in a widespread campaign of spreading false news and stories about PMOI/MEK members and leaders through mainstream media. In parallel, Tehran has conducted several terrorist and spying operations against the Iranian opposition in Europe and U.S. In the past year, authorities in several European countries have foiled terrorist plots by the regime of Tehran. At least one Iranian diplomat was arrested and is being tried for being directly involved in the bombing attempt against the Free Iran Rally in Villepinte, Paris, in June 2018. Two Iranian diplomats were also expelled from Albania because of their involvement in terrorist activities against MEK members.

“I’m asking you, the elected representatives of the French people, to be the voice of the Iranian people, the voice that raises questions on terrorist attempts, on executions, on imprisonments,” Betancourt said. “I call on you to ask, until when are we going to believe that our only interlocutors are the tyranny of the mullahs while Maryam Rajavi is here to make the transition to a peaceful Iran.”

Tahar Boumedra, the former chief of the human rights office of the UN mission to Iraq (UNAMI), reminded that the dossier of the 1988 massacre of Iranian political prisoners remains unsolved. “The Iranian regime has covered this truth. No Iranian official has been brought to justice and they continue to hold positions of power today,” Boumedra said.

Tahar Boumedra, the former chief of the human rights office of the UN mission to Iraq

Tahar Boumedra, the former chief of the human rights office of the UN mission to Iraq

While calling for an investigation into the 1988 massacre, Boumedra also criticized some western media that have been colluding with the Iranian regime to demonize the Iranian Resistance.

“The NCRI does not want to seize power but wants to hand it over to the people, and it has a proper structure and plan to do this,” said MP Michèle de Vaucouleurs.