I, as the legal advisor for the People’s Mojahedin Organization of Iran (PMOI) in Albania, am writing to draw your attention to a perturbing matter.

On 27 March 2019 , an infamous agent of the Iranian Ministry of Intelligence (MOIS) and the Iranian regime’s embassy in Albania called Gjergji Thanasi, along with a journalist that we subsequently found out his name was Eskil Engdal from Dagens Naeringsliv newspaper, appeared in front of the residential compound of the Iranian refugees, members of the PMOI in Manez in province of Durres in Albania.

The two unexpectedly came to the entry gate and started to take photo of the compound ignoring the signs indicating that taking photo and filming was prohibited. When the Albanian security guards asked them not to take photos, they aggressively continued with taking photos.

Gjergji Thanasi is involved in espionage and dirty activities against PMOI members in Albania. The Iranian Intelligence Ministry (MOIS) took him to Iran under cover of a journalist for further briefing and instructions in January 2019. In the past, under the guise of a chauffeur or interpreter, he has approached the PMOI compound for espionage, filming and collecting information about security systems of the compound that are to protect the members from attacks by the Iranian regime’s terrorists.

After popular uprisings in Iran in January 2018 and the end of US appeasement of this regime, the Iranian regime has resorted to intense terrorism and disinformation campaigns against the PMOI and Iranian Resistance, believing this to be a remedy to its existential crisis; therefore, it resorts to any dirty conspiracy. In addition to the attempt to bomb the New Year ceremony hall in Albania last year, I should refer to another foiled bombing plot in 30 June 2018 against a PMOI gathering in Paris and a spying and assassination attempt against Iranian resistance in USA and arrest of two MOIS agents in this regard on 20 August 2018. (Enclosure 1)

Furthermore, we have been informed that Mr. Engdal has met with some MOIS agents, including Hassan Heyrani, who call themselves former members of the PMOI and are on the payroll of the Iranian regime’s embassy in Albania.

I would like to let you know that since beginning of 2018 that members of the PMOI have moved to the current location, dozens of Albanian and International reporters and US and European personalities including Albanian Ministers have freely visited the compound. In addition, Albanian citizens in large and small groups come to the compound to visit their friends. (Enclosure 2)

For your information, Der Spiegel magazine in a completely biased article by a journalist who was trapped by the Iranian regime, covered falsehoods of some agents of the Iranian regime. Then it was condemned in March 2019 by Hamburg Court to remove from all its documents some allegations against PMOI or otherwise threatened to pay “fine of up to €250,000, and in the event that this cannot be recovered,” with a custodial sentence of up to six months. (Enclosure 3)

We would respectfully ask you not to allow your newspaper and journalist to become unwantedly tools of the Mullahs regimes to enhance its objectives and prepare the grounds for assassinations of the Iranian refugees in Albania.

Respectfully,
Behzad Saffari
Legal advisor for the PMOI in Albania 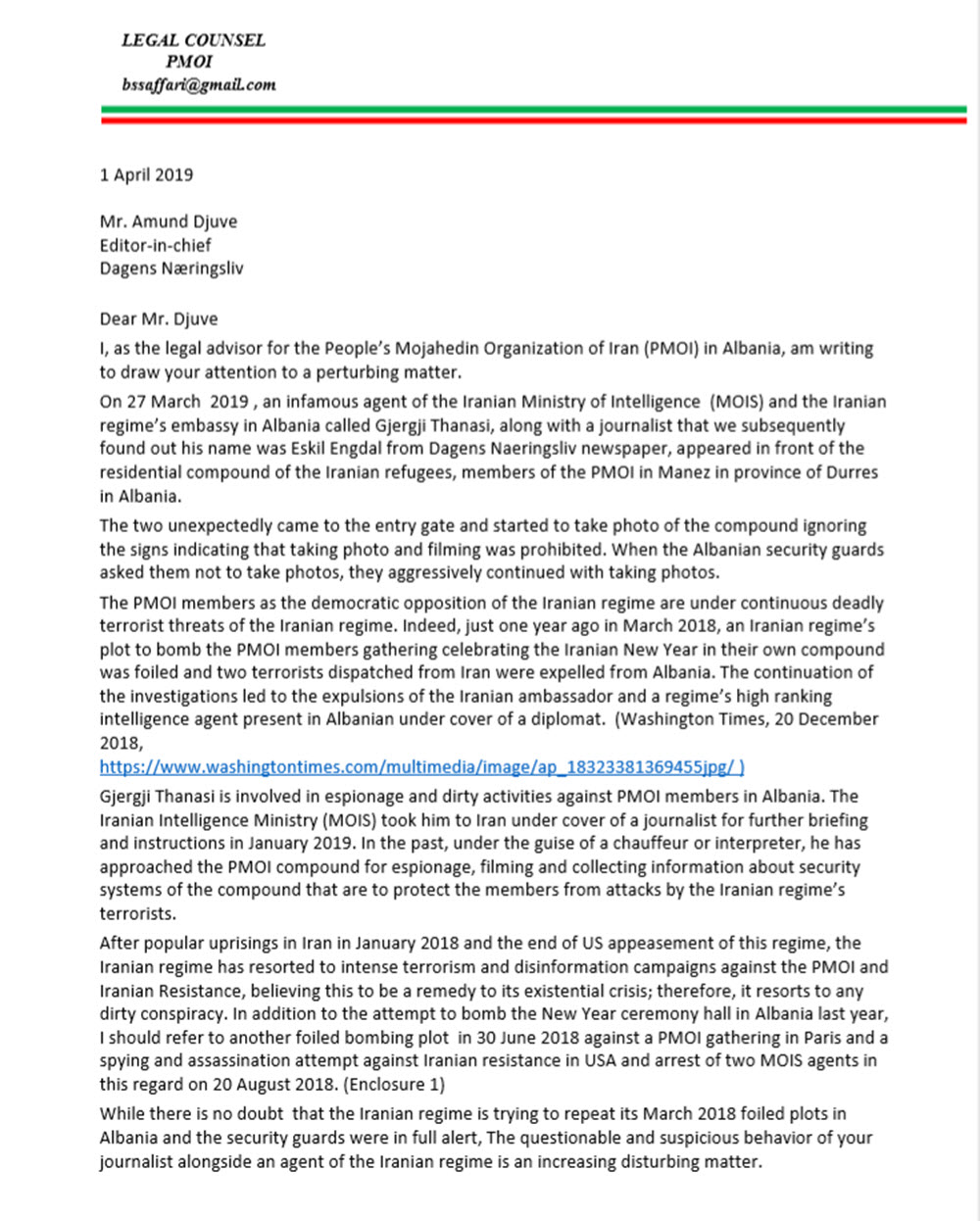