Iran, Ashraf, MEK, MKO, Albania
MEK virtual conference in Ashraf-3 (Albania)
On Saturday, the National Council of Resistance of Iran held the latest in a series of virtual conferences to discuss escalating conflicts between the Iranian regime and its people. As well as highlighting recent activities by the country’s democratic opposition, the event celebrated the 55th anniversary of the founding of the NCRI’s main constituent group, the People’s Mojahedin Organization of Iran (MEK). 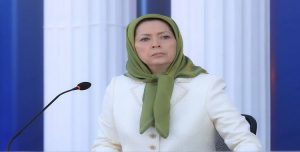 In July NCRI held a similar conference over three days, in place of an annual in-person gathering of expatriates. Saturday’s event conveyed much the same message as the “Free Iran Global Summit,” but placed much more emphasis on the perspective of the Iranians themselves, as opposed to the geographically and ideologically diverse supporters who have participated in previous gatherings.

Both events were viewed in real time by members of approximately 300 Iranian communities from throughout the world. Many representatives of those communities took center stage in Saturday’s livestream, as individual supporters of the MEK delivered personal remarks detailing the MEK’s ongoing struggle for freedom and outlining their expectations regarding the aftermath of recent mass uprisings in Iran. 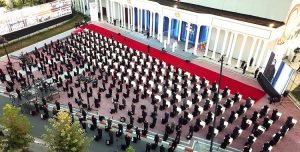 Speakers joined the conference from California, Texas, Virginia, Germany, France, Sweden, and so on. While many are professional or political activists, others hold careers in fields like education, medicine, and engineering, but have committed to supporting the Iranian Resistance through financial donations, political campaigns, and echoing voice of the Iranian people in events and demonstrations organized by the NCRI and MEK. 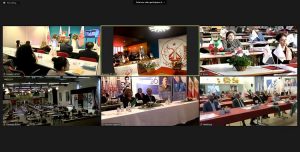 Maryam Rajavi waving to thousands of Iranians all over the world joining the Iranian Resistance’s virtual conference
Some speakers acknowledged being raised in families that have supported the MEK since its founding, but others described realizing later in life that the MEK and NCRI represent the best hope for democracy and civil rights in Iran. Fatemeh Sarhadi, of the Association for Human Rights and Democracy, told the conference, “My relationship with the MEK did not begin in friendship. I had many questions. But as I asked and learned, I came to respect their ideals, the sacrifices they have made and the struggle they lead.”

The MEK’s leading role in the Iranian people’s struggle for freedom, particularly inside Iran, has become much more apparent in recent years. For most of the 41 years the mullahs have been in power, the Iranian regime has been trying to downplay the MEK’s strength and popularity, brushing off the MEK as a “cult” or a “grouplet” with little organization or support within Iran. But in January 2018, Supreme Leader Ali Khamenei was effectively compelled to walk back this propaganda after a nationwide uprising revealed widespread popular endorsement of the MEK’s platform. 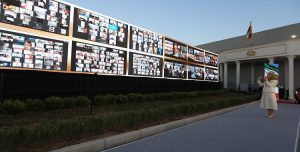 Thousands of Iranians from all over the world join the Iranian Resistance’s virtual conference
Khamenei explained in a speech while the uprisings was still ongoing, the MEK had “planned for months” to popularize anti-government slogans and facilitate public demonstrations in upwards of 100 cities and towns. Participants in the uprising called attention to a false distinction between two factions of the regime. Identifying “hardliner” and “reformists” by name, the protesters declared that “the game is over” and that they intend to overthrow this regime.

But unlike other countries, the alternative to the mullahs’ regime is clear. The NCRI has long identified Mrs. Maryam Rajavi as the prospective leader of a transitional Iranian government following the mullahs’ overthrow and pending the country’s first truly free elections. Commitment to such elections is part of Mrs. Rajavi’s 10-point plan, which outlines the NCRI’s vision for the future of Iran. Other specific principles that attract the people and especially the youth of Iran to the Iranian Resistance include separation of religion from the state, gender equality, freedom of expression, and disregard for nuclear weapons and ethnic or sectarian conflicts.

maryam rajavi, statement, Iran coronavirus, covid-19, mek, ncri
Maryam Rajavi, the President-elect of the NCRI
At the conclusion of Saturday’s conference, the participating Iranian communities presented a joint statement affirming these principles and making it clear that they can be achieved only via the overthrow of the existing regime. And toward that end, the participants also appealed for international assistance, not in the form of direct intervention but simply through coordinated political support for the Iranian people and recognizing their right to overthrow the mullahs’ regime.

Ashraf-3, home of the MEK members
“The international community must recognize the right of the Iranian people to fight against religious fascism and to establish democracy and the rule of the people in Iran,” the concluding statement said. “Supporting the MEK and [its] Resistance Units… is the national duty of anyone who is committed to the freedom of Iran.”

But the conference touched upon the idea that the international community and especially the have traditionally been derelict in this duty. Although the three-day teleconference in July and the previous annual gatherings have made it clear that the Iranian Resistance enjoys considerable support among foreign policymakers. The Resistance, in turn, has repeatedly criticized status quo “appeasement” policy of the international community toward the Iranian regime.

Furthermore, the NCRI has described that appeasement as resulting from the influence of Iranian propaganda, much of which is squarely focused on the MEK. In her own speech on Saturday, Mrs. Rajavi noted that “the clerical regime is admitting… in a thousand different ways that its main problem is the structure of the PMOI/MEK. So, it must be obliterated and beheaded to guarantee the regime’s survival. This is the common goal pursued by all the regime’s mercenaries.”

This preoccupation has led to a number of direct attacks on MEK members and supporters, and to over 100,000 deaths, including 30,000 in a massacre of political prisoners during the summer of 1988. The appeasement policy has also led to the MEK being included, for a time, on the State Department’s list of foreign terrorist organizations. This designation was removed in 2012 following multiple court cases that failed to establish any wrongdoing on the part of the organization. Yet false narratives about the MEK have lingered in international media and policy circles because of attempts of the regime’s Ministry of Intelligence and Security.

Even where the regime has failed to demonize the MEK as a terrorist group, it has spread the much bogus notion that the Resistance enjoys little support inside its homeland. But the regime’s historical propaganda campaign against the MEK and remark by mullahs’ top officials such as Khamenei rejects these bogus claims.

Saturday’s conference in Ashraf 3 alone rejects these claims. Thus, speeches from Iranian expatriates were accompanied by video messages from MEK supporters and “Resistance Units” inside Iran. The subjects of those videos remained anonymous, underscoring the fact that any affiliation with the MEK is potential grounds for the death penalty. But that in and of itself goes a long way toward falsifying the regime’s claims accusing the MEK as being a cult.

If it was such a marginal movement, why would the regime currently be in the process of cracking down on those who followed the MEK’s lead in demanding regime change during the January 2018 and November 2019 uprisings? And as one participant in the conference asked, why would Iran’s state media outlets have produced 32 films and television series over the past two years, to counter a movement that isn’t able to replace the clerical regime?

Answering these questions not only reject the regime’s propaganda, but it also shows what group is the viable alternative to the Iranian regime.