michael rubin ncri activism uprising
In a commentary published in Townhall on January 24, Ali Safavi of NCRI’s Foreign Affairs Committee rebutted the latest diatribe by Michael Rubin, his fourth in less than a month, against the Iranian Resistance!

Safavi highlights Rubin’s checkered record, including his two trips to Iran in the 1990s and his ties with an Iraqi double agent, Ahmed Chalabi, and undercuts his ridiculous characterization of the MEK as a cult. Rubin’s “superfluous demand that MEK members must prove to him that they have disagreements with its leadership are not only childish tantrums but mirror the demands of regime interrogators and torturers in the “death commissions”. In the context of American history, that is like calling Continental Army officers atop Brooklyn Heights ‘cult’ members unless they prove that they have written letters of protest to George Washington in the midst of the New York campaign of 1776!,” Safavi wrote.

Below is Mr. Safavi’s piece, which can also be read here in Townhall. 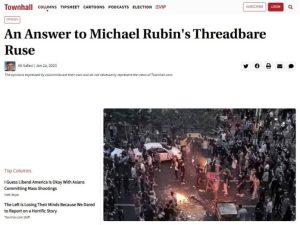 townhall answer michael rubin ali safavi 24012023 1
An Answer to Michael Rubin’s Threadbare Ruse
Iran’s uprising is in its fifth month, and a revolution is in the making. Meanwhile, Michael Rubin is batting for the crumbling theocracy by smearing its principal opposition, the Mujahedin-e Khalq (MEK). Visibly furious over my January 10 response to his gossip columns, which, like my previous rebuttals on August 16 and November 5, 2022, the Washington Examiner has refused to publish in blatant disregard for impartial and balanced journalism, a rambling Rubin is still ruminating on the regime’s decades-old derogatory epithets for the MEK, prompting concerns about a serious meltdown.

After two decades of doubling down on the regime’s propaganda, today, stark realities are staring Rubin in the face:

Desperate, the Revolutionary Guards (IRGC) is explicitly threatening to launch missiles into Europe to destroy Ashraf-3, the MEK’s home in Albania;

The intelligence ministry boasts that it detained another “network” within Iran that provided financial support to the MEK, immediately after it broadcast the detention of “several teams” of young people who provided “logistical support” to the organization;

And, internationally, in the past few weeks alone, the MEK’s cause has been warmly embraced by Western lawmakers and luminaries in a series of major conferences in the U.S., Canada, France, the United Kingdom, Belgium, Italy, and Ireland, among others.

In light of these realities, Rubin’s cries of “it’s a cult, I tell ya!” are fading into the abyss. Yet, nestled in the lunatic fringes of American politics, Rubin refuses to meet reality.

In his latest sob story, Rubin casually shifts the burden of proof to me. His superfluous demand that MEK members must prove to him that they have disagreements with its leadership are not only childish tantrums but mirror the demands of regime interrogators and torturers in the “death commissions”. In the context of American history, that is like calling Continental Army officers atop Brooklyn Heights “cult” members unless they prove that they have written letters of protest to George Washington in the midst of the New York campaign of 1776!

He rationalizes the regime-originated “cult” moniker by claiming that the organization’s mere consensus on policy issues belies its reputation as a legitimate political opposition. Based on Rubin’s fuzzy argument though, House Democrats who voted unanimously 11 times for Hakeem Jeffries as the Speaker – knowing that there was no chance of victory – also exhibit cult behavior.

No, Rubin cannot make believe that it’s somehow creepy for MEK members to see eye to eye on things. Their story is no beauty pageant. They are waging a monumental resistance against a ferocious tyranny hell-bent on wiping out their entire generation (as Tehran tried to do in 1988). So, you’d better believe it: Unity of purpose is a strategic weapon that they’re not willing to lay down. That’s why the regime and its apologists are livid.

MEK members are absolutely undivided in their belief that the people of Iran deserve a democratic, secular, and progressive government; that free and fair elections will achieve that goal; that Iran should neither be the epicenter of terrorism nor a nuclear menace; and that the death penalty should be abolished. Rubin needs to explain how all this exemplifies a cult and not a vessel for national honor and pride.

The factoids that Rubin snatches from Tehran’s monochrome propaganda archives have been rebutted more times than can be counted; by reputable academics, experts, scholars, political leaders, and observers around the world. Not to mention the 20 major and historic court rulings in the U.S. and Europe, which shattered the “terrorist” label against the MEK, a feat unrivaled in the history of global political movements. Even the late Nelson Mandela was officially considered a “terrorist” by the U.S. until 2008, a full 15 years after he received the Nobel Peace Prize.

Rubin’s red herrings and convenient reincarnation of already debunked charges about MEK “violence” against a corrupt, ruthless, and U.S.-backed, tyrant in the 1970s are merely a lame attempt to whitewash the Shah’s abhorrent crimes. Today, he can definitely hear Iran’s young generation chanting: “No to the oppressor, be it the Shah or the Leader.”

In the real world, the MEK is a 57-year-old deeply rooted movement that offers 85 million Iranians the prospect of a democratic future. This is a noble cause for which more than 100,000 martyrs, including 30,000 in 1988 alone, have paid with their lives.

Internationally, the organization has extensive contacts with political parties and the media in the United States, Canada, all European countries and elsewhere. Majorities in the United States Congress and national parliaments in Europe have lent their support to the MEK going back to the days when Rubin was still obsessing over his high school prom.

Cults are a one-man show. The MEK, on the other hand, has a collective decision-making body and has been completely transparent about its plans and policy positions. It has held dozens of major conferences with its members and officials in the presence of hundreds of foreign journalists and luminaries from five continents.

Rubin simply wants to craft an alternate reality. But as Mahatma Gandhi said, “An error does not become truth by reason of multiplied propagation, nor does truth become error because nobody [in this case, Michael Rubin] sees it.”

Rubin’s pathetic anti-MEK crusade, as Tehran’s templar in Washington, begins to make sense in the context of his disturbing track record. Let’s look at his proudest moments:

Making a Reputation in Propaganda

In 2014, Rubin was linked to an investigation that revealed the UAE’s multimillion dollar deal with PR firm Camstoll.

In 2006, New York Times ran a front-page story exposing that Rubin had improperly hidden his affiliations with another PR firm called the Lincoln Group operating in Iraq. Rubin advised them “on the content of the propaganda campaign in Iraq.”

The Curious Case of Chalabi

The Rubin-Chalabi duo’s interests overlapped with Tehran’s vis-à-vis the MEK. Chalabi’s contacts in the MOIS and IRGC wanted demonization of the MEK.

Rubin’s relations with Tehran go even deeper, dating back to the 1990s. In his first visit, he recalls “lecturing” at the regime’s Foreign Ministry outfits.

“I enjoyed the summer of 1996 and found warm friends among the many people I met.” But mysteries abound about who he rubbed elbows with.

While in Tehran, he had a strange epiphany: “Nor is there a viable opposition to the current government. Iranians hate the People’s Mujahedin.” Later, he wrote that he did not want to “jeopardize” future visits to Iran.

To sum up, Rubin is a struggling propagandist – and a clumsy one at that. His patronizing attitudes toward the Iranian people, their organized opposition, and the MEK’s female leadership are an obnoxious residue of the bygone era of colonialism. In the 21st century, Rubin’s ideological ilk cannot shake their nostalgia for an era of perceived superiority (perhaps that is why he admires the Pahlavi monarchy).

Rubin’s neocolonialist bigotry is the other side of the coin of his misogynist mindset. He reserves his harshest antagonism toward Maryam Rajavi, a symbol of empowered Iranian women, who leads a pluralistic and democratic coalition as the President-elect of the National Council of Resistance of Iran (NCRI).

A reckless and oversimplified use of the word cult “expresses prejudice and antagonism just as much as racial slurs and insulting words for women,” writes scholar Catherine Wessinger.

I leave Rubin with a set of questions to answer:

On whose invitation did Rubin spend four months in Iran in 1996? Who financed his stay and arranged for his visa?

In 1999, Rubin visited Iran through an organization that some accuse is used by the Iranian regime “to manipulate American foreign policy by setting the conditions of debate years in advance.” Why did he participate in this initiative?

Rubin himself admits that some of his “academic” contacts in Iran were “working for” the MOIS. Considering that “sending any researchers to Iran will require bowing to the ayatollah’s wishes,” what requests did the ayatollahs make in exchange for allowing him to “research” in Iran?

In 1999, he exchanged views in Iran with “an audience of about 500 academics, students, theologians, and government officials.” Who were the officials and “academics,” and has he kept in touch with any of them since?

His most up-to-date account of public opinion in Iran, especially regarding the MEK, goes back to a quarter century (in 1999). But, even then, he admits that his “shadowy handlers” prevented him from contacting “ordinary Iranians, especially outside Tehran.” So, based on what scientific research did he confidently conclude that a public he could not even talk to actually “despises” the MEK?