Tehran Jam hospital – People protest following the passing of Mr. Shajarian
The regime’s state-run media on Saturday, while referring to the protests after the passing of Iran’s renowned master of Persian traditional music and singer, Mohammad Reza Shajarian, reflected the regime’s fear.

Protests erupted after Mr. Shajarian passed away on Friday night. People on street chanted slogans such as “the National TV is a disgrace,” and “Death to the dictator.” Fearing these protests could initiate another round of the major protests, the regime held Mr. Shajarian’s funeral under high–security measures

“Down with the dictator!”
“Dictators die, brave men never die!”#IranProtestspic.twitter.com/qy82nnwAQ4

The same regime and its media that for years censored Mr. Shajarian and deprived people of hearing his extraordinary voice, now pretend to be mourning for him. This is nothing but a criminal attempt to steal another well-known character and a desperate attempt to quell the restive society.

The state-run Hamdeli daily on Saturday wrote: “Most of the people are worried about the pressures of life, high prices, and unemployment, etc. Now if the Islamic Republic system puts obstacles on the path of the artists, it will initially add to the society’s anger; and any recklessness will add to the opponents [of the regime]. Thus, it should not be expected that both the people and the society live in peace. Because the smoke rising from this fire will hurt everyone’s eyes.” 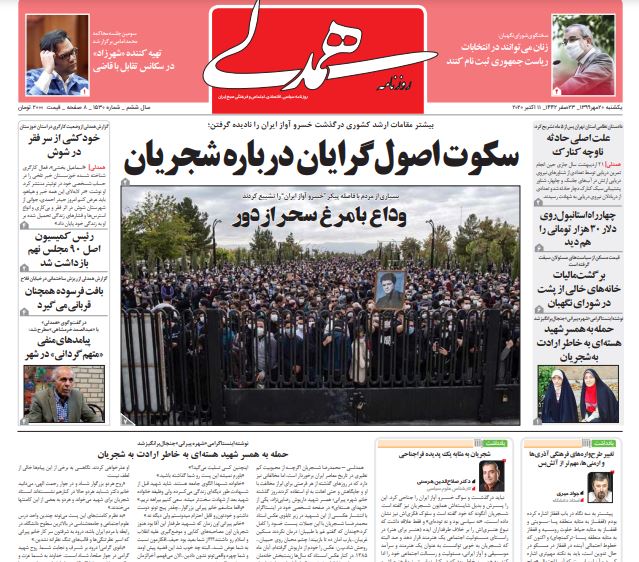 Hamdeli daily – Saturday edition- First page
The state-run Jahane-e Sanat published an article by Mahmoud Sadeghi, one of the regime’s former lawmakers about the regime’s high-security measures during Mr. Shajarian’s funeral. “Just to pay tribute to these renowned Master of Persian singing, I went to Jam Hospital and stood afar. Unfortunately, the police and special forces tightly controlled the streets leading to the hospital, and the motorbikes of the special unit attacked the crowd. Such scenes are recorded by cameras and transmitted to the world. This makes the opposition subject to negative propaganda, but unfortunately, this recklessness is repeated in such events.” 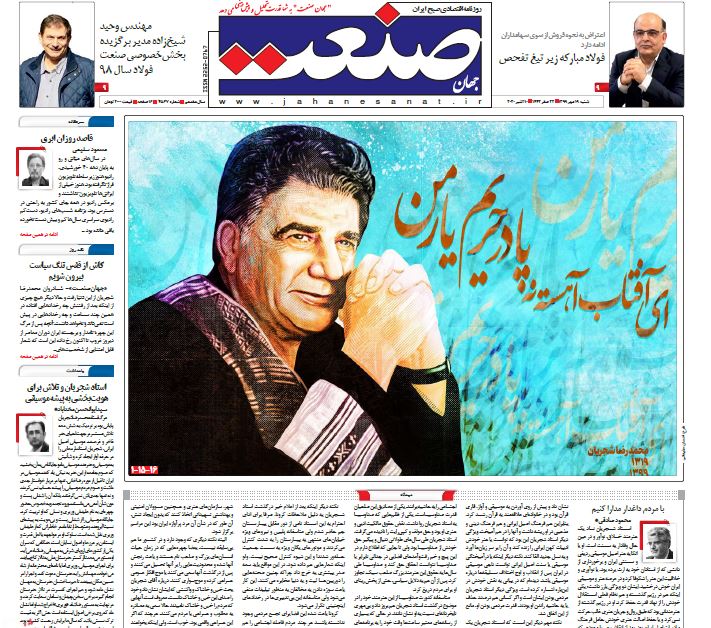 Jahan-e Sanat daily- Saturday edition – Frontpage
While referring to the regime’s attempts to pretend it mourns the loss of Mr. Shajarian while it is only meant to quell the society, Sadeghi wrote: “It is not unprecedented in our country, sometimes figures who are great and famous people during their lifetime [the regime] hurt them and impose restrictions on them. But after their deaths, [the regime’s officials] try to accompany the public opinion.”

Referring to this, Sadeghi wrote in Jahan-e Sanat: “We all remember the reaction of Mr. Shajarian to the ‘dust and trash’ issue, calling himself the voice of those ‘dust and trash’. Now those who called people dust and trash try to pretend they are accompanying the people.”