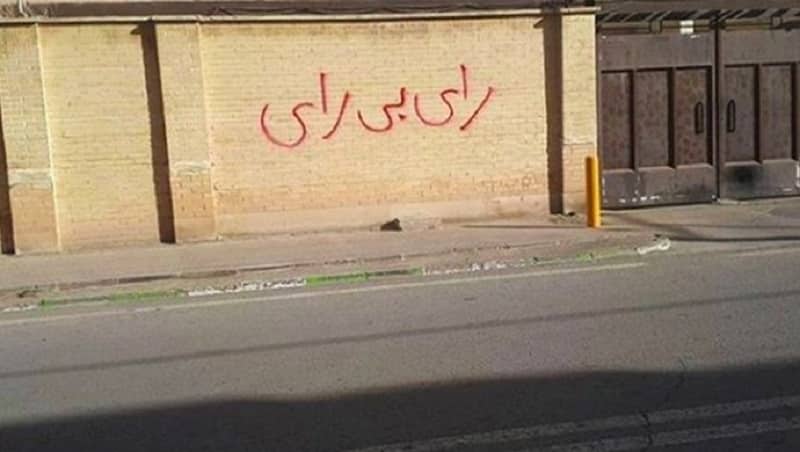 graffiti on the wall reading: “no to voting”
Today the registration will end for Iran’s sham presidential election. The names of candidates are less important than the total number of ballots cast. Ali Sufi, one of the regime’s analysts, explained the situation on April 21 in a newspaper interview: “The most serious rival of the presidential candidates this time is the people’s participation [in the election].”

The people have cast their votes in uprisings calling for regime change, and their frustration was previously exhibited in the sham parliamentary election held in February 2020.

In the immediate aftermath of that sham election, the regime’s state-run media acknowledged that well over half of all eligible voters had declined to participate in the process. This was a significant admission of failure, given that regime officials had worked tirelessly to encourage the highest level of participation possible and engineered a number of participations. They even went as far as to cover up news of emerging coronavirus infections for weeks beforehand. The extent of the failure was underscored by state media’s apparent inability to facilitate a similar cover-up of the electoral boycott. Those outlets, together with entities like the Basij militia, have a long history of inflating statistics on voter turnout and staging crowded scenes at polling places, in order to present a false image of the regime’s legitimacy.

That image was uncommonly important to the regime at the time of the parliamentary elections, which came very soon after the US drone strike that killed the regime’s top terrorist official, Qassem Soleimani, as well as just two months after a nationwide uprising that featured slogans like “death to the dictator” being chanted in nearly 200 cities and towns. As with a prior uprising at the beginning of 2018, plus countless smaller demonstrations in the intervening two years, the November 2019 uprising also provided an outlet for the public’s condemnation of both political factions – the so-called hardliners and reformists who typically alter their power-sharing arrangements with each successive election.

The dual uprisings were widely regarded as two of the most serious challenges to the Iranian regime’s hold on power since the 1980s. This interpretation was strongly supported by the fact that even the regime’s Supreme Leader Ali Khamenei acknowledged the protests were largely organized and directed by the People’s Mojahedin Organization of Iran, the leading voice for a democratic alternative to the mullahs’ dictatorship. For the preceding three decades, Tehran had insisted that the MEK had little real support inside Iran. But with the rapid spread of anti-regime sentiment starting in January 2018, this narrative became virtually impossible to defend.

The regime’s ensuing struggle to save face was made all the more challenging in the aftermath of Soleimani’s killing in January 2020.

The Islamic Revolutionary Guard Corps shot down a commercial airliner near Tehran, and rather than blaming that incident on the US, Iranian activists once again poured into the streets to condemn the entire Iranian regime. Some even went so far as to burn public images of Soleimani, whom the regime had attempted to portray as a universally revered figure.

This stark contrast between public sentiment and the regime’s propaganda offers some insight into how the Iranian people would have most likely responded to Soleimani being put forward as a candidate for the presidency this year, as was likely to happen had he not been killed. Now, in the wake of years of popular unrest and growing support for the MEK, it is all but certain that the public will have the same response to the candidacy of Ebrahim Raisi, the current head of the regime’s judiciary.

Raisi, like Soleimani, is among the most brutal figures in the regime’s four-decade history. As well as being close associates of Khamenei, both men established their credentials in part through crackdowns on the MEK and its supporters, both inside Iran and in the surrounding region. In 1988, Raisi was a leading figure in the “death commissions” that interrogated and executed over 30,000 political prisoners. And in the 2010s, Soleimani oversaw multiple attacks on Iranian dissident communities, particularly in Iraq. Collectively, these actions demonstrate that the suppression of dissent has consistently been among Tehran’s top priorities, often taking precedence over the basic welfare of the Iranian people.

Of course, it should come as no surprise to the Iranian regime that its subjects reject such priorities. But by all accounts, this awareness has only ever motivated the regime to put more effort and more resources into its propaganda and its paramilitary activities. It has never altered its political strategy, and there is no sign of it doing so ahead of next month’s sham presidential election.

The widespread boycott of last year’s parliamentary elections was a much a reflection of popular disillusionment with Rouhani’s faction as outrage over dominance of the system. During eight years in office, Rouhani never oversaw any reforms and never protested any of the severe crackdowns on dissent. He was aware of and involved in, the order to open fire on participants in the November 2019 uprising – during which the IRGC killed approximately 1,500 people – as well as the plot to bomb a gathering of the Iranian Resistance near Paris in June 2018.

Rouhani’s complicity reflects a system in which all candidates for high office must demonstrate fealty to the supreme leader in order to be eligible. For that reason, “Resistance Units” affiliated with the MEK have been promoting a boycott of the regime’s sham presidential election in much the same terms as they promoted the uprisings in 2018 and 2019. On social media and in messages posted in public spaces, they argue that by refusing to participate in sham elections, the Iranian people can “vote for regime change” and take a major step toward establishing a truly democratic system of government.