Public awareness of Iran’s severe Covid-19 crisis has been growing, but international media still largely refuses to report the true death tolls coming out of that country. The regime’s Health Ministry has put the total from March through October at roughly 34,000.

All the while, People’s Mojahedin Organization of Iran (PMOI/MEK) announced on Wednesday that COVID-19 fatalities has surpassed 136,000.

The coronavirus crisis has reached a point that even regime’s Health Ministry officials including members of the National Coronavirus Combat Taskforce have issued statements that hint at a much direr situation.

Reza Malekzadeh, a deputy to Health Minister Saeed Namaki, even went so far as to saying that out of a population of 85 million, approximately 35 million have likely already been infected with the novel coronavirus. Meanwhile, a report from Kerman University of Medical Sciences suggested that the official death toll could more than double by the end of February. This is very much in keeping with the latest Health Ministry reports, which indicate that the country has set multiple consecutive records for the single-day death toll, reaching 415 on Wednesday.

The Kerman University report is alarming in its own right. But the danger over the next four months will be much more severe if this projection was explicitly based on the current official estimates regarding the death rate. Those estimates have been extensively called into question since Tehran first acknowledged domestic instances of the pandemic last February after at least a month of cover-up. The real death toll announced by the MEK, debunks the regime’s wrong statistics. 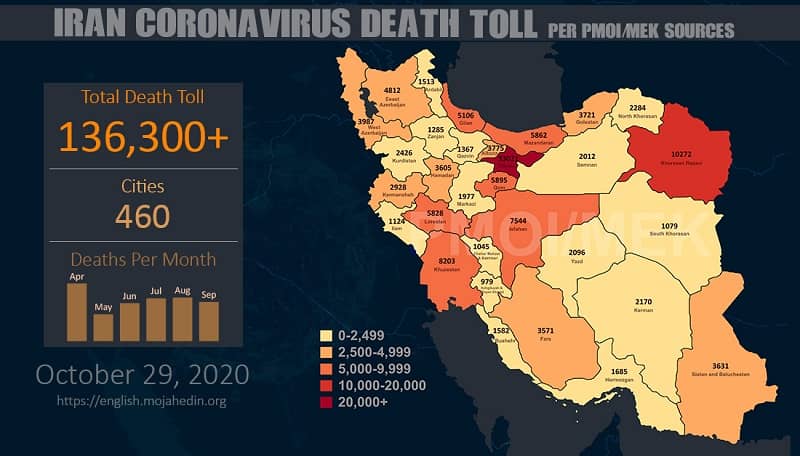 Despite the rising Covid-19 death toll in Iran, the international media outlets have refused to report on the real dimension of crisis in Iran. This is unfortunate not only because it obscures global understanding of the severity of the crisis, but also because it disregards vital insights into the reasons for that severity, the implications, and the ways in which the international community can best help the Iranian people to survive and recover. Those insights help the regime and its apologist to depict U.S. sanctions for the Covid-19 mortality rate in Iran, while mullahs continue their inaction vis-à-vis the crisis.

It is worth noting that sanctions in question already allow exceptions for medicine and any other humanitarian goods that might be used in managing a public health crisis. The MEK’s contributions to this discussion include a credible account of the real source of deficiencies in the government response. And chief among these is the mullahs’ simple unwillingness to alter their priorities in response to the new situation.

It is no secret that the mullahs’ regime has provided virtually no financial relief to the population since the pandemic began. In this regard, Mrs. Maryam Rajavi, the NCRI President-elect has emphasized that there are literally hundreds of millions of dollars’ worth of assets under the direct control of the regime’s Supreme Leader Ali Khamenei and the Revolutionary Guards (IRGC), none of which have been made available to medical centers or other entities that could help manage the Covid-19 response.

Quite to the contrary, those assets have remained locked up in so-called religious foundations or have continued to cycle through the IRGC’s financial empire – an empire that is estimated to account for more than half of Ian’s gross domestic product. IRGC’s dominant role in the economy has naturally led to huge sums of the public wealth going toward projects such as the expansion of terrorist proxies in surrounding countries. And as the MEK’s reporting makes clear, this process has continued unabated even during the coronavirus pandemic.

The mullahs’ regime is fundamentally unwilling and unable to change its priorities, regardless of the severity of the domestic crisis. And in the presence of that mentality, the regime can do little other than downplay the problems while heaping undue praise upon its own actions. Yet even that strategy is beginning to fracture as the severity of the crisis becomes more and more difficult to deny. The regime’s latest statements are indicative of this, although those statements are still rife with contradictions, with the Health Minister saying one day that hospitals are over-capacity and reassuring people on the next day that there are still beds available.

Regardless of the precise numbers or the specific effects on the Iranian medical system, there is simply no denying that the community spread of coronavirus is now out of control in all Iranian provinces. The further details will gradual reveal themselves as Tehran continues to lose its grip on the situation.

Now it is time for the international media outlets to reports the real scope of the COVID-19 crisis in Iran. This will help saving lives, and ultimately toward saving the Iranian people from all the other forms of suffering imposed upon them by an inherently self-serving and abusive theocratic dictatorship. Among all the other insights the MEK has provided, it has noted meaningful connections between the present crisis and the recent threats that the mullahs’ regime has faced from people.

Since the end of 2017, Iran has been rocked by five large-scale uprisings, with protests encompassing more than 200 cities and towns in November 2019, just a few months before the first wave of coronavirus infection. Ever since then, Iranian regime’s officials and commentators have been warning about the persistent threat of unrest, and the MEK’s leading role during these protests.

Khamenei, Regime’s Supreme Leader Blames the MEK for the Iran Protests
The worsening coronavirus outbreak amplifies that threat in two distinct ways. In the first place, it underscores the regime’s sheer incompetence and gives additional fuel to public outrage. And beyond that, it underlines that the only real solution to this and other crises is a fundamental change of regime in Tehran. Mrs. Rajavi has made this point explicit her recent speeches, at times emphasizing the need to shutter the IRGC and redirect its resources to the people.

And along the way, she has of course urged the international community to help pave the way for that outcome, first by designating the Revolutionary Guards as a terrorist group and then by offering genuine political support to the Iranian people’s desire for regime change, in advance of their next uprising against the theocratic system. As the public health crisis continues to worsen while the regime offers no response other than faltering denials, that uprising is increasingly inevitable. The international community must make itself ready now.