A year after the Iran protests of November which rattled the regime’s foundations, now state-run media express fear of another uprising.

Almost a year after the major Iran protests of November which rattled the regime’s foundations, now state-run media express fear of another uprising due to the economic crisis and the coronavirus pandemic.

Since the coronavirus outbreak, the Iranian regime has used the criminal policy of a deliberate cover-up of this crisis, thus using its resulting mass casualties as a barrier against a possible uprising by the restive Iranian society. After forcing people back to work and holding college entrance exams and recently the Muharram mourning ceremonies, the Iranian regime has now decided to reopen schools. This decision will jeopardize the lives of the students and increase the rapid spread of this virus.

In this regard, the state-run Resalat daily, in an article on Thursday, acknowledged the people’s hatred of the regime’s decision to reopen schools. “The doubt of the students’ families has turned to the certainty that amid the coronavirus outbreak, schools are not safe. Thus, they should forget about sending their children to school, because as always, the word of officials is not reliable,” Resalat wrote.

Minoo Mohraz, a member of the regime’s so-called “National Committee to Combat Coronavirus,” on Wednesday told the state-run Asr-e Iran website: “Schools are considered the best place for the coronavirus transmission. Even if people wear masks for a long time and sit indoors, there is a high risk of infection.” 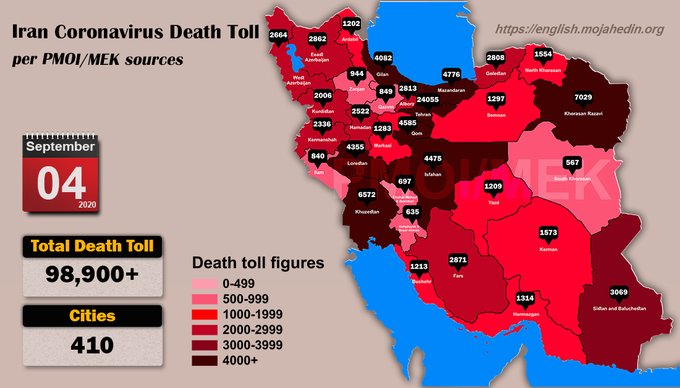 In addition, during their infightings, Abdolreza Mesri, the regime’s Member of Parliament from Kermanshah, western Iran, on August 29 had said: “If we rush and let students contract the coronavirus, it means we have deliberately committed murder.”

The Javan daily, affiliated to the regime’s Revolutionary Guards (IRGC), on Thursday wrote: “The news indicates a strange pressure of the non-governmental school mafia to reopen schools and confusion in the Ministry of Education … It seems that the force behind the scenes and the non-governmental school mafia is more powerful than the Ministry of Health.”

One of the main grievances of the Iranian society is the economic crisis. This includes the rising inflation rate, high prices, and liquidity. These are due to the regime’s wrong economic policies, systematic plundering of national wealth for funding terrorist groups such as Hezbollah, and institutionalized corruption. The economic problems were the reasons that triggered the previous two nationwide uprisings in 2018 and 2019.

In this regard, the state-run Ebtekar daily on Thursday wrote: “People have been hearing news of rising prices of goods. They are not even surprised. The sad thing is people have to exchange as much money as they have with goods to bear the unbridled inflation. The question is who is responsible for this situation?”

While acknowledging that economic hardship has eliminated the middle class, Ebtekar wrote: “What people are experiencing today is the unpredictability of their living conditions. This inflation, however, will have more consequences in the future. When people’s purchasing power does not increase, they can no longer replace what they have today. The living standards of the Iranian people will decline in the coming decade, and the consequences of this will be the gradual disappearance of the middle class.”

Referring to the regime’s failed sham parliamentary elections which were boycotted by the public and the Iranian society’s restiveness Ebtekar wrote: “The prospect of eliminating the middle class from Iranian society is, of course, nothing more than passivity and frustration, which, although may not lead to a revolt in the short term, ultimately will lead to increasing turmoil and violence in society. This indifference, which showed itself in the dimension of political action in the elections of the 11th parliament, can no longer accompany and empathize with the government in advancing its goals.”

Ebtekar daily warned the regime’s officials that if the society’s trust is not restored or their grievances are not answered, people will “turn to violence.” While calling a possible uprising and a social turmoil “despair and distress,” Ebtekar added: “Ultimately, however, what can further lead Iranian society to despair and even distress is the lack of an unclouded vision of the future. When people lose their hope in the future, the situation becomes critical. The alarm of this crisis has been ringing for some time. Perhaps it would be better to hear this alarm earlier than ever and think of a clear and practical solution, instead of speech therapy.”

To control this restive society, the Iranian regime has increased executions and death sentences, particularly against the detained protesters of the January 2018 and November 2019 uprisings. Yet, these oppressive measures no longer terrify society. In this regard, the state-run Mostaghel daily on Wednesday wrote: “The sympathy and harmony of the society with the executed people and the awakening of their sense of compassion towards these selected [victims] by the ruling system are signs of the widening rift between the society and the government. As much as the government carries out executions coldly, society views these executions as violent and protests them.”