-All Trump sanctions were anti-JCPOA & must be removed—w/o distinction between arbitrary designations.

Insistence on the U.S. taking the first step by returning into compliance first and lifting all sanctions is Tehran’s main demand and the talking point constantly pushed by the regime and relayed by its network of apologists/lobbyists in the West.
Now, is what the Iranian regime claiming even true? Did the U.S. actually cause this crisis?
Let’s take a look at the facts.

Iran nuclear deal crisis Who is to blame?
The 2015 nuclear deal, known officially as the Joint Comprehensive Plan of Action, was reached in July 2015. While Tehran and pro-appeasement voices across the U.S. and Europe may claim that the previous U.S. administration first violated the JCPOA by exiting the deal on May 2018, facts prove otherwise.

On December 8, 2015, the Institute for Science and International Studies published an analysis of a report issued by the International Atomic Energy Agency (IAEA) on the Possible Military Dimensions of Iran’s Nuclear Program. It is specifically stated Tehran violated the JCPOA by refusing to fully cooperate with the IAEA investigating the Possible Military Dimensions of the nuclear program.

On June 6, 2017, Reuters reported that the Iranians had produced excess heavy water illegally, at least twice, which they sold for profit. A quarterly IAEA report on Iran said Tehran’s stock of heavy water had reached 128.2 tonnes, which a senior diplomat described as “very high.”

Ever since the JCPOA was implemented, Iran refused to allow military inspections into its military sites. This in itself is a violation of the nuclear deal based on the JCPOA’s relevant language. 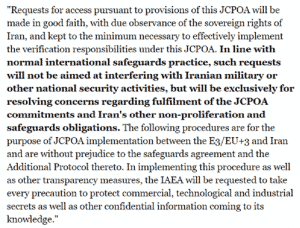 On September 20, 2017, the Iranians exceeded the limits on advanced centrifuge research and development by assembling more than a half dozen IR-8 rotor assemblies and operating 13-15 IR-6 centrifuges in a single cascade, according to reports.

On October 9, 2017, German intelligence reported yet again that in 2015 and 2016, when the U.S. was still part of the JCPOA and in the final years of the Obama administration, Iran attempted more than one hundred times to obtain illicit nuclear technology, as reported by Fox News.

The next day, on October 10, 2017, Fox News reported that the Iranian opposition coalition NCRI released critical information showing that Iran’s research and development activities, as well as nuclear activities, were continuing at the Parchin military site, out of reach of IAEA inspectors.

On January 22, 2019, Ali Akbar Salehi, head of the regime’s Atomic Energy Organization, explained in a state T.V. interview how the regime used deceptive measures to mislead the international community while claiming to have abided by the JCPOA. Iran did not dismantle the core of the plutonium reactor at its Arak site, as required by the deal.

Iran’s cheating in nuclear deal & deceptive measures on cementing the Arak heavy water reactor
As we see, Iran’s regime has been in violation of the JCPOA from day one, meaning during the Obama years and far before the next administration exited the deal in May 2018. Therefore, this argument by Zarif, parroted by his network of apologists and lobbyists in the West in order to garner support from pro-appeasement circles, is easily debunked.

Iran’s regime has been in violation of the 2015 nuclear deal. Furthermore, there is no indication that this regime can be trusted in any future agreements.