Iran entered 2023, passing a year full of protests and strikes by people from all walks of life. Those protests foretold a nationwide uprising, which ultimately erupted in September 2022 and has continued to this date despite the regime’s suppression.

Iranians marked the new year in 2022 with social protests stretching across the nation following an almost two years break due to the Covid-19 pandemic. The clerical regime’s mishandling of the crisis resulted in over a half million casualties and prevented another uprising from happening following the major Iran protests in November 2019.

The first series of protests began in April 2022 by teachers and educators. This nationwide protest was part of the teachers’ movement that began in late 2021 against their poor economic conditions, demanding the release of detained teachers and activists and protesting the regime’s negligence in addressing their problems. According to the reports tallied by the Iranian opposition, Mujahedin-e Khalq (MEK), teachers and educators in at least 50 cities held protests on April 21, 2022. Protesters chanted slogans such as: “Release the imprisoned teachers,” “Teachers, workers, unite,” “Government betrays, parliament supports,” “teachers are awake, and they abhor discrimination,” and “This is the last message, the teachers’ movement is ready to rise.”

On Sunday, May 15, pensioners, and retirees held nationwide protests in front of the local offices of the Social Security Organization. They chanted slogans such as “Only on streets, we can earn our right.”

Despite the regime’s attempt to disperse the crowd and dismantle this movement by arresting several activists, retirees continued their nationwide protests in June. On Monday, June 6, dozens of Iranian cities witnessed demonstrations by retirees and pensioners, who defiantly chanted anti-regime slogans, targeting the regime’s newly selected president, Ebrahim Raisi. Though the regime increased pensions, but since the inflation rate was much higher, retirees and pensioners remained under the poverty line. Thus, in their protests, they chanted: “Death to Raisi,” “Enough with promises, our tables are empty,” and “Inflation is 100%, they raise salaries by 10%.” 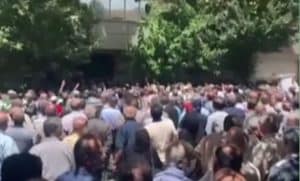 Tehran – Bank network pensioners protest
The protests continued despite the regime’s many warnings and intimidations. On June 8, defrauded creditors and investors held a protest gathering in front of Tehran’s Bank-e Meli. This protest aligned with a three-year movement by investors and creditors of many state-affiliated credit institutions and banks who devoured people’s lifetime savings by encouraging citizens to invest with a higher rate of interest.

Following Iran’s currency fluctuation crisis, which resulted in the rial’s devaluation in June and July, merchants in Tehran and other cities held protests and went on strike. They protested their poor living conditions and the regime’s mismanagement of the country’s economic crunch.

On May 23, the ten-story Metropol Complex in Abadan, southwest Iran, collapsed, leaving dozens of casualties. Located in a busy area in downtown Abadan, the twin tower of Metropol was evaluated as a dangerous building by many experts. But due to his close ties to senior IRGC commanders and other local officials, the owner of Metropol, Hossein Abdolbaghi, ignored many warnings by experts and called them hallucinations. “The formula behind Abdolbaghi becoming rich is smart management and building relationships [with regime entities], privileged opportunities, and forming ties with political and administrative figures,” the state-run Fidous website acknowledged on August 3, 2020. The regime also delayed in helping to retrieve would-be survivors, further angering the locals. As a result, protests erupted in Abadan and other cities in southwestern Iran.

Everything the Collapse of the Metropol Building In Abadan Brought to Lighthttps://t.co/dRRiLuBilX pic.twitter.com/XySFQDQ79o

Yet, this was not the first series of protests in southwestern Iran. Considered a hotbed of anti-regime protests, Khuzestan province witnessed several other demonstrations in May and June 2022 by locals, who protested the dire living conditions and the unbearable economic conditions. The security forces raided these protests, arresting dozens of citizens while severely beating innocent protesters.

In May and June 2022, Iranians in dozens of cities poured onto the street, calling out Raisi’s economic policies, including the elimination of the so-called “preferential rate” of 42000 rials to a dollar. Instead of addressing people’s economic grievances, the security forces arrested many protesters and inflicted violence on many more.

Yet, the regime failed to stop a growing public hatred and society’s explosiveness, which stemmed from four decades of mismanagement, ineptitude, corruption, and oppression. This power keg only needed a spark to blow, and that spark was the tragic murder of Mahsa Amini in Police custody. Ever since, protests have continued across Iran, with people aiming for regime change and targeting the ruling theocracy in its entirety.

A few weeks before the beginning of the anti-regime demonstrations, the ruling theocracy’s Supreme National Defense University published a report, warning authorities that “Three of four Iranians participate in protests.”

The report “Iran after [the Persian Year] 1400” underlined that the two widespread protests in January 2018 and November 2019, along with the sanctions, the regime’s mismanagement of economic impulses, and its policies over the last three decades “promise a deep social change in the near future.”

Parallel with the oppression and killing of over 750 protesters, authorities have made many hollow promises about economic and social reforms, and their pundits abroad desperately try to portray somehow the conflict between the people and the regime as merely an economic contest created due to the foreign sanctions. They have also tried to limit the Iranian people’s demands, especially women, to the abolishment of mandatory hijab.

However, the Iranian people’s slogans, such as “With our without Hijab, onward to the revolution,” or “Poverty, corruption, high prices; we are going to overthrow [the regime]” or “Death to Khamenei,” “Down with the oppressor, be it Shah or leader [Khamenei],” and “Our enemy is here; they lie it is the U.S.” have debunked these claims, highlighting the nation’s desire to establish a democratic and secular country.

Iran’s people reject the Shah and mullahs’ regimes | Iran protests
The clerical regime has sowed the wind for many years and now is reaping a whirlwind. The only solution Tehran really has is oppression, which it has brutally carried on so far. The durability of protests in such a condition alone confirms the uprising is organized, and this fact has been acknowledged by many regime officials and state media.

“The recent sedition was completely directed and organized to overthrow the state. Trying to exploit fake seditions, the enemies were looking for street riots, attacks on public and government property,” the state-run Tasnim News Agency quoted Hossein Ashtari, the commander-in-chief of the police force, as saying on December 17.

Besides their leading role in the current revolution in the making, the Resistance Units have developed a culture of defiance by torching the mullahs’ symbols, posters, and statues. In addition, the Iranian Resistance has successfully mobilized the world community to isolate the ruling theocracy further.

The role of the MEK’s Resistance Units Network in Iran as a major driving force behind protests, and the regime’s efforts to tarnish the image of its viable alternative at any costs, also reveals that mullahs are grappling with an existential crisis.

Iranian people and their organized Resistance began in 2023 with an unwavering determination to topple the regime and realize a long-overdue democratic change. The time has come for the world to stand on its side and support Iranians’ desire to have a democratic country. The international community should cut ties with the regime and recognize the Iranian people’s right to self-defense vis-à-vis the mounting repression. This would be the most practical season’s greetings and an act of solidarity with the people of Iran.