There have been at least 253 protests in Iran from September 23 to October 7, according to reports by the Iranian opposition, the People’s Mojahedin Organization of Iran (PMOI/MEK).

The upward trend of protests by people from all walks of life stems from social and economic pressures caused by Tehran’s corruption and malign activities. As the Raisi administration has failed to produce an agenda to address the intertwined and complex socio-economic problems, there is no ease of tensions in sight. 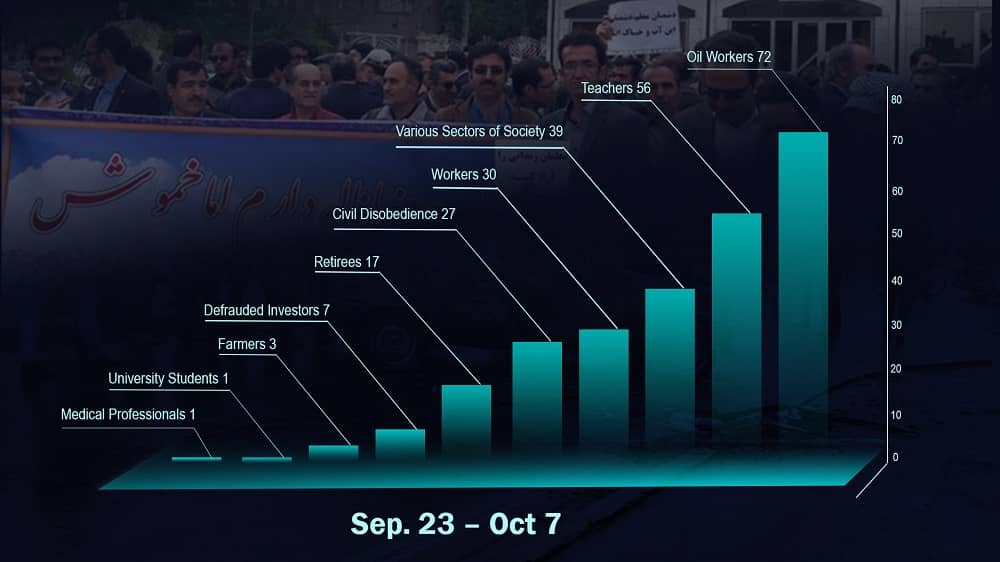 In the city of Isfahan (central Iran), farmers held a protest in front of a local branch of the Water and Electricity organization on Monday demanding their right to irrigation. Despite the heavy presence of the anti-riot units, angry farmers marched and stormed the office.

In the last few years, farmers in Isfahan have been holding protests and demanding their right to water irrigation. Eastern parts of Isfahan province have been deprived of natural water of Zayanderude river following the redirection of its water to other regions.

In the city of Larestan (Shiraz province), a number of locals in Larestan, Shiraz province, held a protest on Monday outside the office of the Ministry of Roads and Urban Development in the city. They protested the poor condition of Jahrom-Lar-Bandar Abbas transition road.

In the southern province of Khuzestan, for the third consecutive day, retirees of the Hafttappeh Sugarcane Factory held a protest gathering outside the labor office in the city of Shush, They demanded their long-overdue pensions and officials “wrong calculation of the retirees” bonuses.

In the northwestern city of Tabriz, workers of Semet-co Tabriz Company gathered outside the company manager’s office protesting poor management conditions at this factory. Semet-co designs tools and engineering company is a subsidiary of Sipa, Iran’s largest automaker.

On Sunday, several workers of Machine Sazi Arak held a protest gathering, demanding the immediate return of their fired co-workers, and an increase of salary in accordance with the current economic situation.

November 9 – Isfahan, central #Iran
Farmers are protesting and demanding their share of water from the local Zayandeh-rud River. Regime officials have long rerouted the waters for their own purposes.#IranProtests#اعتراضات_سراسریpic.twitter.com/OBeIGxyzdR

On Sunday, retirees in Tabriz held a protest demanding officials to increase their long-overdue pensions in accordance with the current skyrocketing prices and inflation rate.

On Sunday, workers of the mines of Kerman Coal Company gathered in front of the Kerman Labor Office, southeast Iran, to protest the privatization plan of these mines and transfer them to Dalahu Company.

Again on Sunday, a group of nurses working for Iran’s Social Security Organization held a protest outside the regime’s Majlis (parliament).

Enforcement of the Law on Hard and Harmful Occupations.
Considering the military service as a record of hard work.
An increase of legal provisions commensurate with the Ministry of Health.
Extraordinary special affiliation.
According to the protesting nurses, the regime has increased pressure on them, despite their difficult working conditions during the Covid-19 pandemic. These nurses had also held a protest gathering on Saturday in front of the regime’s Program and Budget Organization and Parliament.

On Sunday, the defrauded investors of Caspian credit institution held protests simultaneously in Tehran and city of Mashad. The fraudulent Caspian Institution affiliated with the Revolutionary Guard (IRGC) has scammed its clients by looting their deposits since 2016. There have been hundreds of protests by defrauded investors who lost their life savings in the last few years.

In the northern province of Gilan, the workers at Shafarood dam held a protest gathering on Saturday. demanding their unpaid wages and bonuses.

These teachers underlined that they had to work despite the Covid-19 outbreak and bad weather conditions, yet they have not received their salaries for almost a year and a half. These teachers’ salary is around 3 million tomans, while the official poverty line is around ten million tomans.

The municipality workers in the city of Kut-Abdullah in Khuzestan province continued their strike on Saturday, demanding their long-overdue wages and protesting their poor living conditions.

In a similar development, the municipality workers of city of Mahshahr, southwest Iran, held a protest gathering demanding their unpaid salaries.

On Saturday, workers of Iran Khodro in city of Tabriz went on strike demanding their delayed salaries.

On Wednesday, the overhaul workers of Parsian Mehr refinery held a protest gathering in front of the refinery demanding their unpaid salaries.

As protests continue to expand and intensify across Iran, state-run daily Jahan-e Sanat warned on November 9: “Lack of economic security, increasing financial problems, the severe decline in people’s livelihoods, growing inequalities, discrimination and the people’s distrust of officials with their consequences, growth and expansion lead in the long run to the system’s collapse.”

Iran: 253 Protests Across The Country in Two Weeks in September-October