Mohammad Ghaemi (left) and former IRGC commander Saeed Mohammad (right)
Published reports indicate that Mohammad Ghaemi, the former director of the Yas Holding Liquidation Committee affiliated with the Iranian regime’s Revolutionary Guards, has been arrested and has been in prison for more than two months without access to a lawyer.

The state-run ‘Ruydad 24′ website confirmed the news of Mr. Ghaemi’s arrest without further elaboration about the charges, but some media outlets reported it was mainly due to the leak of an audio file that exposed the IRGC commanders’ corruption. Ghaemi appears to have been arrested by the IRGC’s intelligence service, which is headed by Hossein Taeb, a staunch supporter of the parliament’s speaker Mohammad Baqer Qalibaf who was exposed when the leaked file was made public.

The state-run newspaper Hamdeli wrote on May 17: “Some MPs plan to add a new intelligence agency to the country’s political structure. According to the Fars news agency, 74 members of the parliament have prepared a bill for the foundation of the Judiciary Protection and Information Organization. The bill has already been announced by the leadership of the parliament.”

Article 1 (c) of this bill addresses issues that were previously defined in practice by other security organizations and institutions, and which are now being formally executed.

Paragraph C reads: “Preventing, detecting, identifying and countering conspiracies and activities of espionage, sabotage, subversion and creating dissatisfaction among the people and actions against national security at the level of the judiciary and taking care of the cases.” 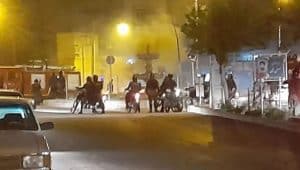 The new wave of uprisings across Iran and the public hatred that has been expressed towards state institutions and security forces has caused some reservations among the regime’s officials and media.

Abdollah Eraqi, Deputy Commander of the IRGC Land Forces on May 16: “Future wars will be fought on a hybrid and combined level, and the enemy of our country’s economy, society, politics, and culture will attack through cyberspace. But today, the enemy is attacking the clergy and the IRGC. It is trying to change our mental beliefs. That is why the clergy has a special role in the “Jihad of Clarification.”

Abdollah Haji Sadeghi, the Supreme Leader’s representative in the IRGC at a meeting called “the clerical martyrs” on May 16: “Put this out of your mind that one day, (the global) arrogance and the enemies will come to terms with you over human rights and nuclear energy. This won’t happen. They are at war with us over the superiority of the Supreme Leader.”

State TV host, May 16: “The enemy, and especially the dissident media, are trying their best to sow division between the people and the government by inciting a limited number of people and creating chaos in several cities. The enemies of the state and the revolution are provoking the crowds in several cities in Chaharmahal and Bakhtiari province which led to riots for several hours.”

Ali Mohammadi, the state prosecutor in Shahrekord, Charmahal and Bakhtiari province: “The protests are leading to attacks on some state organizations and buildings, which is not correct and which will definitely be dealt with.”

Ali Mohammad Akbari, IRGC commander in Chaharmahal and Bakhtiari province: “The Basij centers were attacked and a number of our dear Basij forces had accidents, which are under investigation. What are these people up to? They want to hit us in any way.”