recent months, an unusually high number of dust storms containing particulate matter (PM) have engulfed parts of Iraq, Iran, Syria, Kuwait, and Saudi Arabia. The ongoing series of storms have sent thousands of civilians to hospitals across the region with respiratory problems, and have caused the closure of airports, schools, and government offices. Officials and experts are blaming the growing frequency and intensity of dust storms in the region on the mismanagement of natural ecosystems, agricultural areas, misuse of water resources, ongoing drought, and the effects of climate change.

Dust storms and wildfires in natural ecosystems can be considerable sources of suspension dust and aerosols. The main dust source areas are located in arid climates with annual rainfall under 200–250 mm in the so-called ‘dust belt’. This ‘dust belt’ extends from the West Coast of North Africa, across the Middle East, and to central Asia and China. 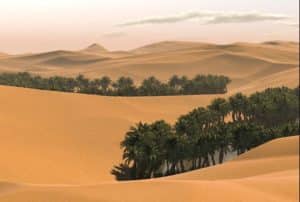 In the last few decades, the frequency of these dust storms has increased, and studies have reported that these storms are affecting many different parts of the world including the Middle East, Central and East Asia, North Africa, Southern Europe, Australia, and the Western United States.

Various studies have investigated the short-term effects of dust storms on the health of citizens in various regions including the Middle East, East Asia, Europe, as well as North America. Dust storms have frequently occurred with severe levels of particulate matter and aerosols in some countries of the Middle East. However, up until now, only a few research studies have reported the effects of dust storms on humans’ health in this region. The Middle Eastern countries, particularly Iraq, Syria, Iran, and Saudi Arabia, have greatly become the epicenter of large and intense dust storms. These countries have not only exposed their own people to health risks but also, have delivered dust particles at very high concentrations, sometimes ten times the permissible limit, into other countries in the region, including Iran, causing widespread health concerns among its people. 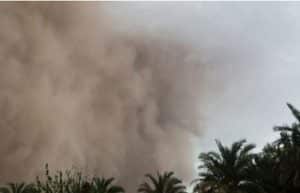 In Iran, twenty-two provinces have been exposed to dust storms containing fine particulates. Western and southern provinces have most severely been affected for many years, with Khuzestan Province, located in the southwest of the country, has faced a serious dust phenomenon since 2000. The average particulate matter with an aerodynamic diameter of fewer than 10 μm levels of PM10 in Khuzestan Province has frequently been above the WHO standard levels. Various cities of the province have been suffering from dust storms over the last few decades, on average more than 84 days per year. Khuzestan province is exposed to the highest amount of PM10 from dust storms. In this area particularly, the effect of dust storms on mortality of daily non-accidental, cardiovascular, and respiratory conditions is significantly high.

There are various pollutants in Iran’s air. The most commonly measured are: particulate matter (PM), carbon monoxide (CO), nitrogen dioxide (NO2), sulfur dioxide (SO2), and ozone (O3). 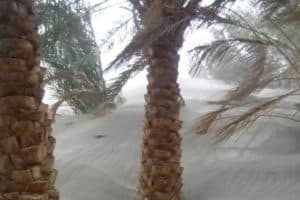 Particulate matter (PM) is defined as fine inhalable particles that are suspended in the air. The two most common size fractions of PM measures are PM10 and PM2.5. PM10, also referred to as “coarse PM,” particles of ten micrometers in diameter or smaller; PM2.5, also referred to as “fine PM” are a subset of those particles, namely those that are 2.5 micrometers in diameter or smaller. Sources of PM10 include particulate from crushing or grinding operations, such as dust stirred up by vehicles, and roads. PM2.5, on the other hand, originates from all types of combustion, including motor vehicles, power plants, residential wood burning, forest fires, agricultural burning, and some industrial processes. PM2.5 poses the most severe health impacts out of all measurable particle sizes because the fine particles can get deeper into the alveolar region of the lungs, and potentially into the bloodstream. 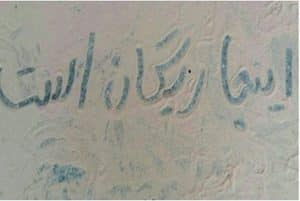 Sand and dust storms are common meteorological hazards in arid and semi-arid regions. They are usually caused by thunderstorms or strong pressure gradients associated with cyclones, which increase wind speed over a wide area. These strong winds lift large amounts of sand and dust from bare, dry soils into the atmosphere, transporting them hundreds to thousands of kilometers away. Some 40% of aerosols in the troposphere, the lowest layer of Earth’s atmosphere, are wind erosion dust particles.

The main sources of this mineral dust are found in the arid regions of Northern Africa, the Arabian Peninsula, Central Asia, and China. Comparatively, Australia, America, and South Africa make minor, but still important, contributions. Global estimates of dust emissions, mainly derived from simulation models, vary between one and three Gigaton per year. 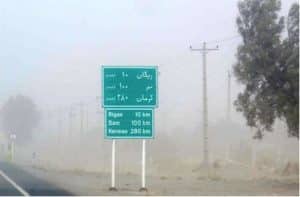 Dust composition is influenced by a wide range of natural and anthropogenic factors. Particulate sizes and conformation are largely determined by the structure and composition of source bedrocks with specific physical and chemical weathering processes. It is common knowledge that wind velocity and atmospheric conditions can greatly influence the dust mixing process during transportation.

Dust storms particulates are often comprised of weathering-resistant minerals, such as quartz, titanium-bearing minerals, and zirconium. Those particulates found at far distances from the storm’s origin are usually composed of clay minerals and phyllosilicates. Particulates generally consist of silicon dioxide (SiO2), aluminum oxide (Al2O3), iron oxide (Fe2O3), and titanium oxides (TiO2). Other common particulates are calcium (CaO) and magnesium oxides (MgO), and oxides of sodium and potassium (Na2O and K2O). Based on the composition of source rock and mineralogy of dust, an array of trace elements such as zirconium (Zr), strontium (Sr), rubidium (Rb), and other rare earth elements are often also present. 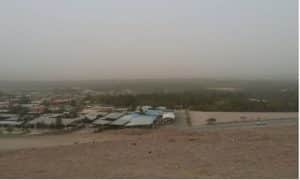 Among the particulates of dust storms, many microorganisms have been identified including bacteria, fungi spores, and even viruses. These particulates have managed to survive for long periods of time, as demonstrated in the analysis of dust collected by Charles Darwin over 150 years ago. Some of these pathogens, especially those in spore forms, for example, Bacillus, have been described to be able to endure UV and gamma-ray radiation, low temperatures, and desiccation instigated by transportation at high altitudes. 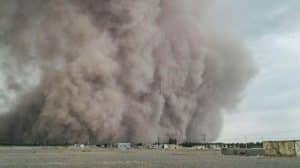 Adverse outcomes of air pollution on humans’ health have already been recognized. The inhalation of particulates suspended in the ambient air can cause many serious public health issues and place the welfare of residents in jeopardy in the affected areas.

Dust storm particulates are important sources of air pollutants transmitted from desert or arid areas. Dust storms can transfer PMs from remote arid regions and desert areas to residential areas, and elevate the concentration of atmospheric PM in those areas to several times more than the recommended health standards. Due to their small size, these particles can enter the respiratory tract, and when they enter the lungs, they can cause specific organ damage as well as subsequent systematic damage to other parts of the body, including the heart and brain. As a result, it is well documented that dust storms influence humans’ health and increase mortality and morbidity through interacting with microscopic organisms, such as fungi, bacteria, viruses, and inhalable transferred metallic elements.

According to the United States, Environmental Protection Agency (EPA), long- and short-term exposure to environmental particulates from dust storms could have devastating effects on humans’ health. The health effects of dust storms often vary from one place to another. The chemical composition of the dust and its sources, the concentration of contained pollutants, and the duration of their presence in the atmosphere can vary greatly in different areas.

Even though there are some studies that have reported that dust storms had no adverse effects on human health, significant numbers, on the contrary, have since proven their effects.

As a fact, it is undeniable that the origin of dust storms in Khuzestan and other Iran provinces is mostly endemic or local, not from foreign origin. Most particulates contained in the dust storms in Khuzestan Province have originated from two centers, including the western region of Ahvaz and the Hoor-al-Azim Wetland area. The locality of storms originating from the Hoor-al-Azim Wetland area, as well as the short distance of foreign sources, can be considered among the reasons for the significant increase in mortality. 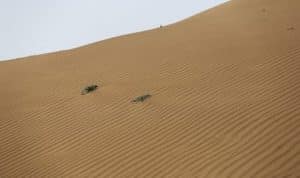 Overlapping issues of the clerical regime’s unsustainable environmental policies which, with some extending beyond Iran’s borders, are tied together in dust storms, climate change, and global warming. Pollution of the air and water is mostly contributing to long-term changes in anthropogenic activities, mainly the activities of the Islamic Revolutionary Guard Corps (IRGC), various government officials, and different religious foundations. Horolazim and Shadegan wetlands dried up for oil exploration, it has become one of the main sources of dust particulates. The Karun, Karkheh, and Jarrahi rivers, the most critical water resources of the province, have now been depleted and contain unprecedented levels of toxic waste. Also, the construction of numerous dams on them had left their dry beds as an additional source for dust particulates.

The lack of moisture in drying plains allows dust to rise, as winds blow and carry it away. While Khuzestan is best known as an energy-rich province, it also lies in the fertile crescent, on some of the earth’s best water and land. More than one million hectares of its land are agricultural, and it provides the country with crucial crops during the cold seasons. However, this is changing as the rivers die out. 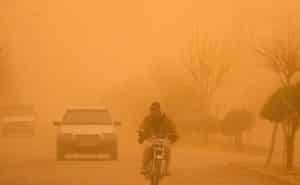 Now, the country is faced with massive water shortages, as well as dust storms, due to the mismanagement, corruption, and water plundering of the ruling clerical regime. The regime officials and some of its foreign and domestic experts are trying hard to portray this severity as drought, climate change, and global warming instead of notorious Iran’s water mafia, which protesting farmers were calling for its abolishment.

Iran’s water resources have been all but depleted due to the massive over-extraction of underground water resources, and IRGC-affiliated companies building dams, regardless of their usefulness for the nation, without any environmental considerations. The farming of water-intensive crops, which are again under the control of affluent IRGC members, elite clerics or foundations, is now under the supervision of Iran’s Supreme Leader. Farmers hit by these water shortages and dust storms are fleeing their villages to live in shacks and sub-standard settlements on the outskirts of cities.

In a previous couple of decades, Iran has become the world’s third-largest dam builder after China and Japan. The majority of these dams have been constructed by IRGC-owned corporations or corporations affiliated with the religious foundations under the Supreme Leader’s supervision. The result of these activities has been the drying of many rivers and caused land subsidence, huge sinkholes in Iran, and major water shortages in its neighboring countries as well. This has led to serious conflicts that have created additional tensions in an already turbulent region.

Iranians have staged many water-related rallies in various parts of the country, such as Khuzestan, Isfahan, and Bakhtiari, in past decades. The Iranian people have not only protested the IRGC’s policy of dam construction, but also the diversion of water away from the southern province of Khuzestan towards the cities of Rafsanjan, Qom, and Kashan. They have also questioned the massive consumption of fresh water for water-hungry industries in arid areas that benefit the bank accounts of corrupt IRGC generals, Supreme Leader, elite clerics, and government officials, without benefit for ordinary people.

The sum of such activities of Iran’s clerical regime has not only caused the country to be water bankrupt, but has also made the dry river beds, wetlands, and subsided farming areas become the main source of dust storms. As research has indicated, dust particles have significant effects on climate, acting both directly, as scattering, and absorbing radiation, and indirectly, by changing the optical properties of clouds on the Earth’s radiation balance, further causing enormous health problems for the people.

* Khalil Khani is an Environmental Specialist and a Human Rights activist. He holds a Ph.D. in Ecology, Botany, and Environmental Studies from Germany, and has taught at the University of Tehran and the Hesse State University in Germany. He is also a Doctor of Medical Psychology in the United States.