NCRI logoResistance Units continued their campaigns on the occasion of the 58th year of the foundation of the People’s Mojahedin Organization of Iran (PMOI/MEK):

Resistance Units in Tabriz projected the image of the PMOI founder, Mohammad Hanifnejad, who was born in Tabriz, as well as the PMOI emblem on the side of a large building on Dr. Hessabi avenue on Monday evening, September 5, at 22:30 using an outdoor projector.

On the same evening, Resistance Units in Shiraz projected the PMOI emblem in Qasr-e Dasht Ave. at 22:30. 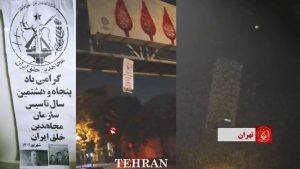