NCRI logoA large number of bazaar merchants and shopkeepers of home and electrical appliances protested the downward spiral in the value of the Iranian currency, the Rial, unbridled inflation, and heavy taxes, this afternoon, Sunday, June 12, at the Amin junction in Tehran. Suppressive State Security Force (SSF) attacked protesters and faced resistance. The demonstrators chanted “Do not be afraid, do not be afraid, we are all together” and “Disgrace, disgrace”. The repressive forces beat demonstrators and passersby with batons.

At the same time, in the Tehran-Pars neighborhood of Tehran, several people protested near the second square of Tehran-Pars to protest the high cost of water and electricity, as well as power outages, chanting “Electricity is our undeniable right”.

On the same day, Arak bazaar merchants closed their shops and marched in the city’s indoor market to protest the rising dollar price and the plunderous taxes. They chanted “Brave bazaar merchants, support! support!” Protesters marched out of the indoor market across the city, chanting “Close, close (your shops)”, urging other bazaar merchants to join them in protest at the regime’s looting.

Ms. Maryam Rajavi hailed the protesting bazaar merchants and shopkeepers, saying that except for the government-affiliated mullahs and their plundering gangs and their corrupt and criminal relatives and affiliates, the vast majority of the people are suffering catastrophically from poverty, inflation, and unemployment. People’s wealth is wasted on repression, terrorism, anti-Iranian nuclear and missile projects, and warmongering abroad. The only way to end the evil religious fascist regime is to establish democracy and popular sovereignty. 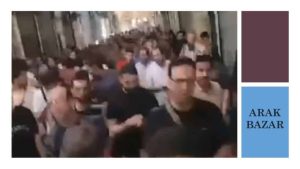