Maryam Rajavi’s speech in the presence of the Nobel Laureate in medicine Prof. Roberts

Professor Richard Roberts, 1993 Nobel Laureate in medicine, and Maryam Rajavi met and held talks in Ashraf-3 on Sunday, June 26, 2022.
Mr. Roberts also visited the Resistance’s Museum and addressed a gathering of PMOI members in Ashraf-3.
Professor Richard Roberts is a valuable scholar of molecular biology. His research led to the discovery of alternative splicing of genes, which proved instrumental in the prevention, and treatment of hereditary illnesses in infants.
The Nobel Committee gave the 1993 Nobel Prize in medicine to Professor Roberts for his discovery.
Professor Roberts is also a humanitarian scientist who has repeatedly protested and issued declarations against the crackdowns on the PMOI in Ashraf and Liberty, and the massacre of 30,000 political prisoners in Iran in joint action with other Nobel Laureates.
During the Iranian people’s uprising in 2009, he sponsored a letter to the UN Secretary-General to condemn the slaughter of protesters.
Maryam Rajavi welcomed Professor Roberts in the PMOI gathering in Ashraf-3, and said in her remarks:

Dear Professor Roberts,
Distinguished scientist and pioneer,
Dear friend of the Iranian people and Resistance
Welcome to Ashraf-3, home of the Iranian people’s freedom.
It is an honor for me and all the freedom fighters, for the MEK members — jailed and tortured by the religious and monarchical dictatorships—present here right now, and for the Iranian Resistance, that you visited Ashraf-3. We are delighted to welcome you here.
We and the Iranian people will remember this visit because of your distinguished scientific career,
because of your support for the Iranian people’s uprisings for freedom,
and particularly because of your sincere and heartfelt defense of the MEK in Ashraf and Liberty during the seven years, from 2009 until 2016, where 150 MEK members were slain and nearly 1,500 wounded in seven bloodbaths. From the first attack until today, you have acted 22 times in support of Iran’s freedom fighters and the Iranian people’s protests.
I salute you and your colleagues, the other Noble laureates, who joined you in this tremendous campaign.
The history of science and freedom will never forget such scientists and will etch their names with gold in its annals. Science and freedom are the two sides of the same coin that seeks the liberation of the human race from determinism, blind destiny, and restrictive social compulsions.
Indeed, in our era, you, Professor Roberts and dozens of other Nobel Laureates are the pioneers and trailblazers in this path.
You are the beacon for other scholars and scientists at a time when oppressive dictatorships trampled on human values, and when freedom fighters endured greatest pressures and most brutal tortures for the longest times. 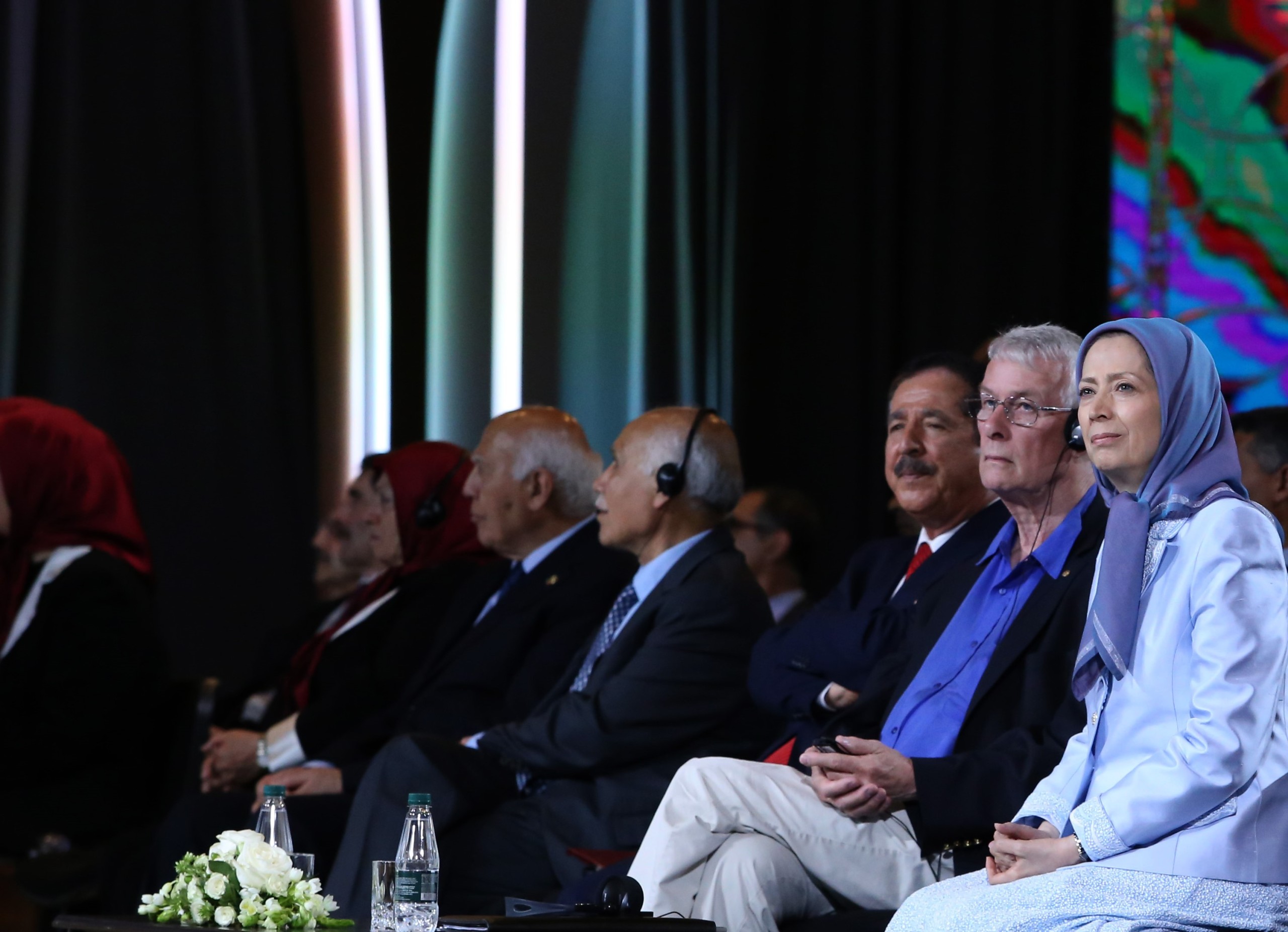 Fighting for a democratic society

The 57-year history of the MEK has been the story of a relentless struggle against monarchical and religious dictatorships to achieve freedom and democracy for their people.
Since 120 years ago, the people of Iran have risen upfor freedom and democracy. Overturning the dictatorships of Shah and the mullahs to establish a democratic and an advanced society has constituted the objective of our people’s struggle.
For the greater part of this era, namely since 57 years ago, the People’s Mojahedin Organization of Iran (PMOI/MEK) has been at the center of the resistance movement, which has introduced a democratic alternative to the ruling theocracy. At the same time, it has created a living example of the separation of religion and state and gender equality.
In the first decade of this century, the MEK was under the siege of two dictatorships in Ashraf City in Iraq, enduring the heaviest pressures for 10 years. They persevered in the face of relentless suppression aimed at genocide and annihilation of the MEK.
When Khamenei’s puppet government in Iraq attacked Ashraf residents, you and and a stellar roster of other freedom-loving scientists and elites around the world wrote to the UN Secretary-General, the US government, the European Union, MPs and officials of various countries. You lent your scientific credentials and international prestige to defend the Iranian Resistance movement.

Dear Professor Roberts,
Our country was once the cradle of worlds’ most renowned scientists, including Jabir Ibn Hayyan, Seyyed Esmaeil Jorjani, Abu Rayhan Al-Biruni, Avicenna, Abu Bakr al-Razi, Omar Khayyam, Abu Nasr Al-Farabi, Khajeh Nasir al-Din Toosi, and Muhammad Khawrizmi. They were among the most outstanding scientists in physics, chemistry, astronomy, medicine, mathematics, and natural sciences in previous centuries.
But repression, liberticide, and widespread plundering of the people’s property by the ruling religious fascism has no limits. Today, Iran holds the world record for brain drain. In the last three years alone, about 4,000 doctors and 300,000 specialists with masters and doctorate degrees, including 900 university professors, have left Iran.
When Khomeini seized power in Iran, universities were the main headquarters of the People’s Mojahedin. At that time, Massoud Rajavi [the leader of the Resistance] was teaching philosophy at Sharif University of Technology under the title “Explaining the World.” Some 10,000 students attended this weekly course. And the text of the courses was immediately copied and distributed on a large scale to other universities and to MEK supporters.
But Khomeini could not tolerate it. Fourteen months after coming to power in April 1980, Khomeini launched a brutal crackdown on universities on the pretext of a Cultural Revolution. By April 22, 1980, at least 17 students had been killed and 2,180 injured. Massoud Rajavi’s classes were also shut down, afterwards.
On March 29, 1980, Le Monde reported that tens of thousands of students carrying admission cards attended Massoud Rajavi’s comparative philosophy courses every Friday afternoon . These courses were sold as paperback in hundreds of thousands of copies, and about one hundred thousand students would watch its video recoding in 35 major cities of Iran.
Le Monde wrote that the MEK, as a popular party, is one of the best-organized organizations in Iran. According to various political commentators, had Khomeini not vetoed Massoud Rajavi’s candidacy during the presidential election by issuing a fatwa, he would have won several million votesand garnered the support of ethnic and religious minorities, and a large segment of women and young people, who rejected the reactionary clerics’ supremacy.
So, Khomeini launched a bloody crackdown on universities and colleges and closed them down, calling this coup against culture a “cultural revolution!”

At that time, Khomeini said, “We are not afraid of economic blockade, military intervention, or (in his words) colonial university. Our universities are not beneficial for our nation. I support the decision made by the Revolutionary Council and the president to purge the university.”

Interestingly, when universities reopened two or three years after the so-called Cultural Revolution, they were governed by the laws of religious fascism. More than 40% of university admissions were allocated to the regime’s security forces, such as the paramilitary Bassij and the Revolutionary Guard Corps (IRGC), and those involved in the unpatriotic war against Iraq.
Even today, universities and students are subject to severe repression and control. Many university professors live in poverty. The regime has executed tens of thousands of students and teachers. Currently, teachers are imprisoned for protesting their meager salaries.
The mullahs impose the reactionary laws of the previous millennia on the people to govern the society, including legal and judicial matters. But they use the latest scientific and technological advances to preserve their decadent rule and to build atomic bombs and missiles.
As Massoud [Rajavi] said: The mullahs “want to cover up the inherent poverty of a despondent regime which is on borrowed time, with enriched uranium and keep it in power.
“What kind of peaceful energy and science is in the hands of Revolutionary Guards?
“Why has this so-called research been kept secret for two decades and, at the same time, devour the budgets that should be allocated to teachers, educators, universities, pensioners, and workers?”

Our pledge is to make freedom flourish throughout Iran

Prof. Robert,
I want to share with you the story of another tragedy.
The massacre of political prisoners in 1988 is unique in the massive dossier of the regime’s crimes. Khomeini issued a fatwa against the People’s Mojahedin, stating that anyone who maintained their beliefs should be executed, meaning those who remained steadfast in their belief in the freedom of their people and homeland and were unwilling to express remorse because of their organizational affiliation, ideals, and leadership. As such, 30,000 people were hanged, 90% from the MEK.
Quite a few doctors were among the countless martyrs, including Dr. Adel Malayeri, Dr. Farzin Nemati, Dr. Firouz Saremi, Dr. Hamideh Siyahi, and Dr. Nahid Sedighi .
In July 2021, you and a dozen of your colleagues wrote a letter to the UN Secretary-General calling for the formation of a fact-finding mission to investigate the 1988 massacre of political prisoners. In this letter, you underlined the role of the regime’s president, Ebrahim Raisi, in commiting crimes against humanity.
For years, our Resistance has been subjected to a demonization campaign to abandon its beliefs and positions and accept that freedom will never come.
But we have pledged to make freedom flourish throughout Iran with our life and soul!
I think it is our shared belief that no force in the world could stop the progress of science and freedom.

In conclusion, I must add that we missed Dr. Sheikhi, Chair of the NCRI Universities’ Committee, among us. I asked Dr. Sassan Mohaddess who had arranged Professor Roberts’s visit. He said the arrangements had been done very quickly and there was no time to inform Dr. Sheikhi. At any rate, we reserve his place here next to Professor Roberts.
I thank you again for coming here. 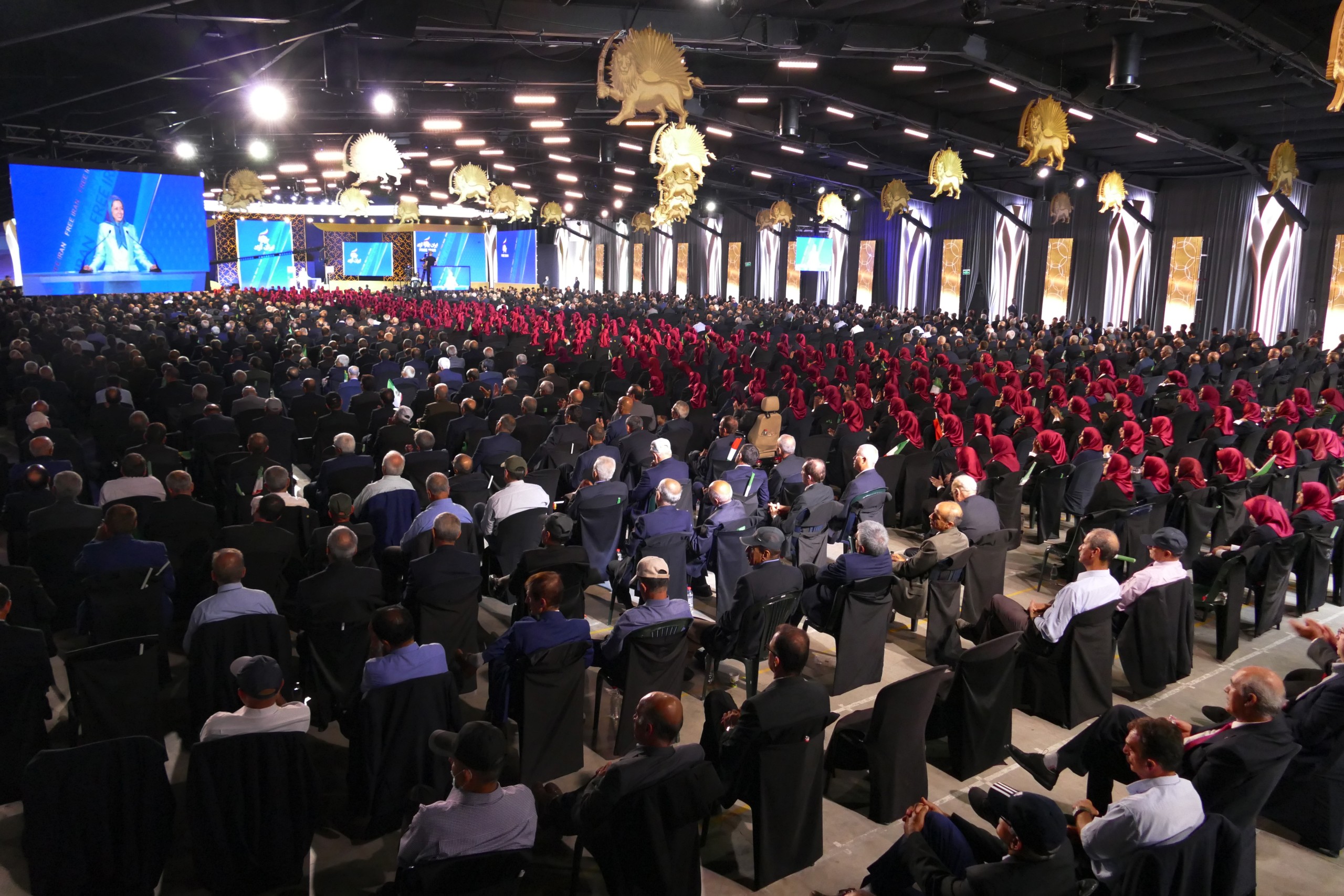