“Of Iran’s population of 85 million, about 28 million live in areas with water shortages and are under pressure in this regard, mainly in the central and southern regions of the country. Water shortages have affected all sections of society, from urban households to agricultural and rural communities,” wrote the state-run Aftab News on Sunday, July 4, 2021.

Many Iranian cities and villages are facing water shortages. Thousands of Iranian farmers are unable to irrigate their lands. But why? One of the main reasons is the unscientific building of dams by the Revolutionary Guards (IRGC) for military purposes.

How the Islamic Revolutionary Guards Corps IRGC plunders Iran’s economy
“The water shortage crisis is now threatening the lives of millions, especially in desert areas, while experts’ warnings about not building dams and building wells have always been neglected,” wrote the state-run Hamdeli daily on July 4.

“According to statistics released about two years ago by the International Commission on Large Dams (ICOLD), Iran ranks second in the region after Turkey and 17th in the world in the field of dam construction. It is said that in recent years, about 172 national dams have been put into operation in Iran, of which 19 projects had started before the revolution, and the rest started after the revolution,” Hamdeli adds. 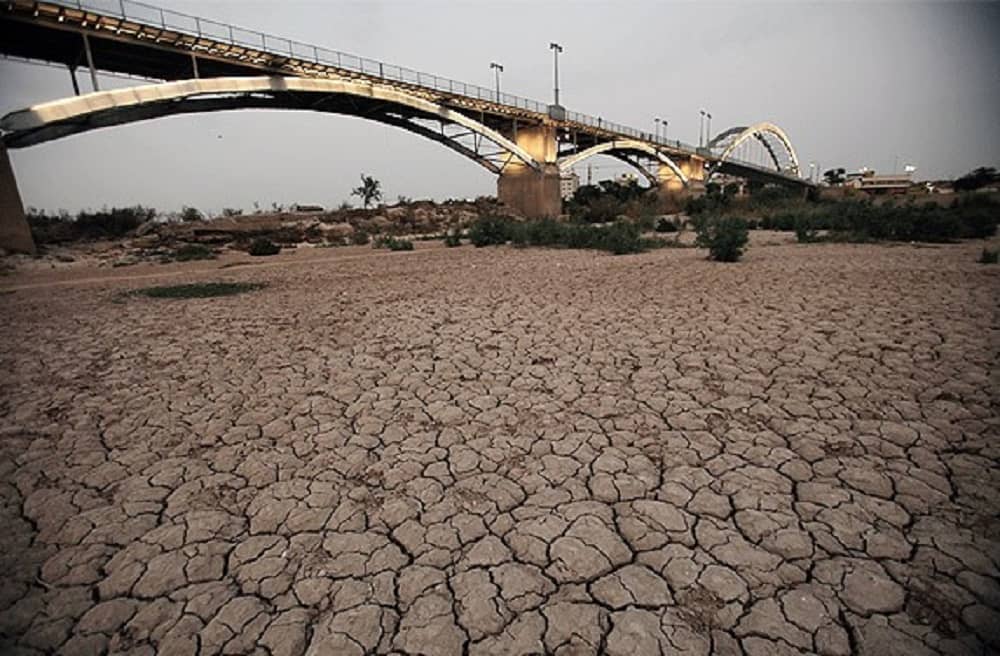 Karoun river
“Many dam projects did not start for water resources management, but rather for generating revenue; so, some companies could have projects. According to reports, the national budget is spent on dam construction, but their cost and efficiency are meager,” Hamdeli acknowledged.

“The crisis has escalated to the point where, according to some estimates, about 85% of Iran’s groundwater resources have been lost. This has been taken into account by foreign analysts. According to international analysts, the acceleration of dam construction has put Iranians one step away from the water crisis,” Hamdeli daily adds.

“The struggle of buffaloes in the sewage of the city that was once the shores of the wetland has only one message: an environmental catastrophe is happening in silence,” wrote the state-run Arman daily in this regard, on July 4.

Iran’s potable water crisis in Khuzestan southern Iran
“Hawizeh Marshes is one of the largest wetlands in the country, which has provided the possibility of living in this province for several thousand years. Suppose the city of Susa has a history of human habitation of about 5,000 years and has never been uninhabited. In that case, it is due to the existence and environmental impact of the Hawizeh Marshes,” Arman daily adds.

Now the Hawizeh Marshes are drying due to the regime’s negligence and would severely impact the ecosystem. There have been wildfires in the region in recent weeks.

According to the Arman-e Meli daily, “The province’s environmental management has warned that if the Ministry of Energy does not pay Hawizeh Marshes right to irrigation, we will see more fires, and the drying up of this international wetland will mean more sandstorms and dust storms.”

Arman-e Meli then quotes Homan Khakpoor, an environmentalist, Hawizeh Marshes “100,000 hectares is in Iran and plays an important role in climate change, with farmers, ranchers, fishermen, and people taking food from it to their table. Undoubtedly, with the destruction of this wetland, Khuzestan is slowly moving towards desertification and depopulation because this wetland will be the source of dust and sandstorms.”

The regime has claimed it has acted to save the Hawizeh Marshes. But Khakpoor rejected this claim in his interview with Arman-e Meli daily.

“Unfortunately, the Ministry of Agriculture and the government’s macro-policies have caused this catastrophe. The Ministry of Energy claims that with 1.4 million cubic meters of water, the Hawizeh Marshes should not be dried and that they have sent 1.8 million cubic meters of water to this wetland from the Karkheh dam. But if this claim of the Ministry of Energy is true, this dam is about 100 km away from the wetland, and in this distance, the released water flows into the agricultural lands,” Khakpoor said.

“Irregular construction of dams on the water resources, oil extraction, destruction of reeds, lack of soil moisture, and lack of vegetation have caused the Hawizeh Marshes to be exposed to direct winds and have a high potential for erosion,” a study published on Publisher of Iranian Journals and Conference Proceedings in 2014 acknowledged.

In other words, Iran’s water crisis is part of the regime’s devasting policies. These policies would not end as long as the mullahs’ regime stays in power. Therefore, Iranians are staging daily protests calling for holding the regime officials to account.