Today, February 22, 2021, despite the Covid restrictions, a group of freedom-loving Iranians demonstrated in front of the EU headquarters in Brussels to protest the EU appeasement policy and demand the return of Security Council resolutions to halt the Iranian regime’s nuclear program. The demonstrators called for a firm stance against the Iranian regime. They called on the European Union to close the regime’s embassies, which are centers of terrorism in Europe, and expel regime diplomats and agents from Europe. The demonstrators chanted slogans in support of the Iranian people and their uprising against the regime and called for regime change by Iranian people and their just resistance. 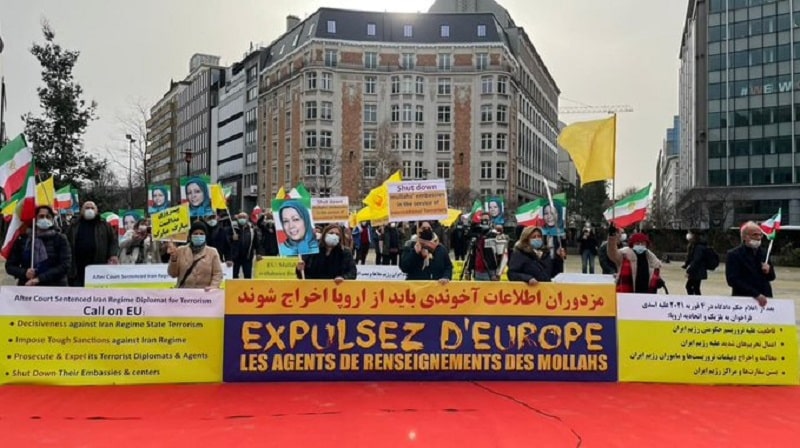 Paulo Casaca, a former member of the European Parliament, joined the demonstrators and expressed his solidarity with the Iranian people and their resistance, and said:

“This is the first time that a regime diplomat has been charged with terrorism in a European court, and Europe must end its appeasement and hold the regime accountable for terrorism on European soil and for violating the nuclear deal.”

Mr. Serge de Patul, from the Belgian Committee of Parliamentarians and Mayors for a Democratic Iran, also joined the demonstrators. In his speech by referring to the regime’s terrorism in Europe and the Belgian court verdict against the regime’s diplomat, he said any relationship with the regime must be conditional to half of terrorism by the regime on the European soil.

In #Brussels now, as a gathering of Free Iran protesters have come to tell Europe, they cannot close eyes on executions in #Iran to keep trade interests with the mullahs.
Iranians rallying today demand leaders to #ShutDownIranTerrorEmbassies pic.twitter.com/02MLkqO2Vp

Senators Mark Demesmaeker of Belgium and Mr. Goblet of the Belgian Parliament, who have sent letters to the Belgian Foreign Minister and the European Union, also sent their letters to Iranians’ rally in Brussels. In these letters, they expressed their concern about holding an economic meeting with the regime after the conviction of the Iranian regime’s diplomat and considered such relations unjustifiable after the conviction of the regime’s diplomat. Their message states that the Belgian court ruling shows that the regime’s terrorism was not the initiative of just one person but the whole regime. The order came from top regime officials, including Supreme Leader Ali Khamenei, President Hassan Rouhani, Foreign Minister Javad Zarif and Intelligence Minister Mahmoud Alavi, and Zarif, as foreign minister, should be held accountable.

The following is the statement of Senator Demesmaeker:

STATEMENT
Silence on Iranian terror case reflects dangerous old habits of EU Foreign Policy
I would like to express my concern about the online Europe-Iran Business Forum due to take place on 1-3 March, supported by the EU and with the participation of high-level representatives of the EU as well as of the Iranian regime.

The silence of the EU over the recent conviction, in a Belgian court, of Assadollah Assadi, a high-ranking Iranian diplomat and his collaborators on charges of terrorism and for planning to bomb the Free Iran gathering organized by the National Council of resistance in Paris in June 2018 is dangerous.

Considering that it is not the first of its kind, and it reflects the apparently deliberate neglect of policy advice that had been offered in previous weeks by dozens of European lawmakers and former government officials.

The court found that the four defendants are part of a larger terrorist group within a specific Iranian intelligence service and “there can be no doubt Assadi’s terrorist outrage was planned and ordered from the highest echelons of the regime, including the Supreme Leader Ayatollah Ali Khamenei, the president Hassan Rouhani, the foreign Minister Javad Zarif and the Minister of Intelligence Mahmoud Alavi.” The evidence for this conclusion is manifold, and it includes the simple fact that Assadi, as the third counsellor at Iran’s embassy in Vienna, would have been in close contact with higher-ranked diplomats including Zarif himself, making it impossible that the Foreign Ministry could have been unaware of his activities.

The decision by the EU to sponsor the Europe-Iran Business Forum between 1 and 3 March 2021 and to invite Iran’s Foreign Minister Javad Zarif to speak at this online event rewards Iran’s state terrorism instead of holding its chief diplomat to account for the terrorist acts committed by his diplomat. This event must be cancelled since it will only embolden Iran and risks inviting more terrorist acts on European soil in the future.

Today the EU must take action to stop Iranian state terrorism instead of promoting trade and saving the nuclear deal at all costs, which now means whitewashing Iran’s terrorist acts on European soil. These efforts must reflect the condemnation made in the EU Declaration on Iran in April 1997, following the Mykonos case in Berlin, when Iranian agents were convicted of terrorist activities in Europe.

I would like to point out that on December 3, 2020, on the second day of the Antwerp trial against the failed bombing of the Iranian regime by its diplomat Assadollah Asadi and his accomplices, about 250 parliamentarians from 20 European countries issued a statement. In this statement, entitled “End Iranian Government Terrorism on European Territory,” they referred to the vast amount of evidence and documents discovered and disclosed by police officers and the Belgian and German security services.

In the statement, parliamentarians stated that after this evidence, the EU should pursue a policy of determination to protect its security and democratic values from the terrorist threats of the Tehran government. This requires practical measures, such as the trial and expulsion of terrorists and the regime’s network of intelligence agents in the guise of citizenship or asylum in European countries, the closure of the regime’s so-called religious, cultural, charitable or diplomatic centers. I am counting on the EU leaders to understand that this approach is the only right one.