Shouts of “get lost murderer” was the only achievement the Raisi government’s spokesperson earned during his visits to two universities in Tehran and Qom on October 24 and 25.

The reaction of brave Iranian university students to Ali Bahadori-Jahromi’s staged visit and his failed gesture of “dialogue” laid bare the regime’s weakness. It showcased people’s determination for regime change.

Bahdori-Jahromi’s visits were held after various security apparatus stationed in Tehran’s Khaje-Nasir and Qom Universities took preventive measures. They had tried to intimidate students and filled the conference room with regime supporters who had entered those universities on special privileges for state-affiliated thugs.
However, Iranian students neither fell for Jahromi’s pathetic gestures nor bowed when security forces showed teeth. They stormed the meeting place in both universities and chanted anti-regime slogans highlighting that the university is no place for the “government of murderers” and its spokesperson.

Since their creation, Iranian universities have been home to Iran’s intellectuals who act as trailblazers in the struggle for freedom. On December 7, 1953, three students at Tehran University were killed by the Shah’s police and became the symbol of the Iranian university movement, turning the university into the “bastion of freedom.” Their anniversary has been honored by Iranians ever since.

Founders of Iran’s most prominent opposition groups under Shah’s regime, such as the Mujahedin-e Khalq and Fadaiyan-e-Khalq, were university students who paved the way for Iran’s revolution in 1979.

Sensing the danger, Ruhollah Khomeini, the Iranian regime’s founder, called the universities a “source of corruption.” He soon initiated the so-called “cultural revolution” and brutally oppressed dissident students and teachers across Iran. His successors sent their

under the banner of “unity between religious seminaries and universities” to universities across Iran. Iran’s ruling theocracy also stationed several security apparatuses inside universities, handpicked teachers, and laid off dissident professors.

Yet, these actions failed to stifle the voice of dissent in Iranian universities. In July 1999, brave Iranian university students took to the streets and clashed with security forces. A movement that started in the Tehran University Campus soon gained nationwide traction and shook the ruling establishment. The incident forced the so-called “reformist” President Mohammad Khatami to greenlight the brutal crackdown on students, a move that became the start of his demise.

Nevertheless, the incident prompted the clerical regime to deploy the Revolutionary Guards (IRGC) and Basij paramilitary members to universities, working as security agents, students, or lecturers.

Until the first major series of protests across Iran in 2018, the regime almost had universities under its control via excessive violence and crackdown on the students’ unions. In 2018, university students in Tehran acted as sledgehammers, breaking the atmosphere of fear.

By the popular slogan of “Reformist, Principalist, the game is over”, they delivered the last nail to the coffin of “reformism” the regime had used for too long to deceive the Iranian society and the international community.

University students once again played a leading role during the glorious November 2019 uprising. Despite the regime’s heavy quash of that uprising and the killing of over 1500 protesters, Iranian university students took to the street in January 2020 following the downing of a passenger jet by the IRGC and called for regime change.

After oppressing protests in 2020, mullahs found a new ally: the Covid-19 pandemic. Calling the deadly virus, a “test” and “blessing,” the regime’s Supreme Leader Khamenei banned the import of credible coronavirus vaccines and increased the death toll through deliberate inaction and systematic cover-up.

Now, as protests expand across Iran, universities and their students have risen up and rightfully earned their place as the “bastion of freedom.” They hold daily protests despite the regime’s severe crackdown and zealously call for regime change. High school students are also following in the footsteps of university students. These brave young men and women inspire people across Iran, and the world community is amazed by this much courage and tenacity. 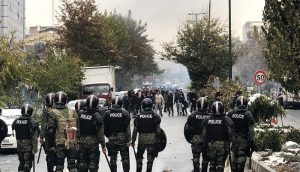 As knowledge demands responsibility, Iranian students are shouldering the challenges and are paying the price for a future in the making. After dealing with the most active state sponsor of terrorism and Islamic extremism, world leaders are aware of what is at stake. The international community shall honor its moral and political obligations by recognizing the Iranian people’s right to self-defense and self-determination of their future. This will serve their nation’s interest, as it does their own initial ideals.