Written by
Hamideh Taati
During the past week, numerous Western and Arab media outlets covered the Iranian Resistance’s activities in its quest for regime change and establishment of democracy in Iran.

These media coverages were over the activities of the Iranian Resistance Units, an internal network of the People’s Mojahedin Organization of Iran (PMOI/MEK), and the recent transatlantic conference by the National Council of Resistance of Iran (NCRI), as well as the NCRI’s other events. Some of these media outlets also published articles either by the Iranian Resistance or in support of its quest for regime change.

The following are some examples:
Colonel Wesley Martin on TownHall: Iran’s Diplomatic Saga 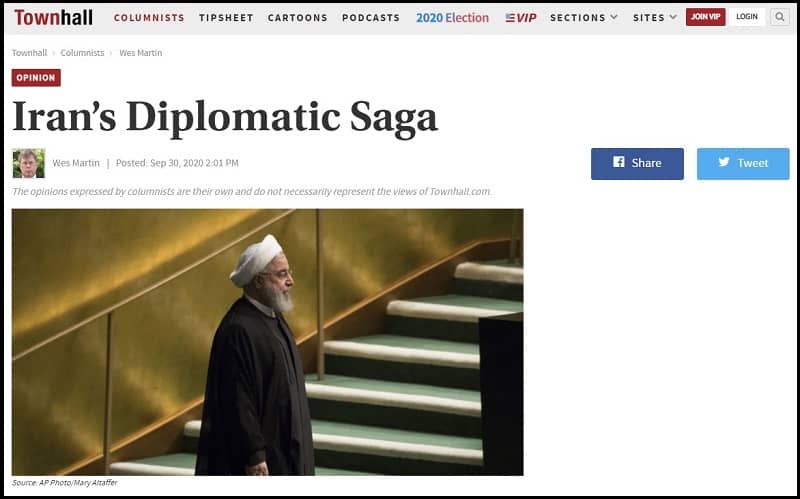 In an article on TownHall, Colonel (Retired) Wes Martin the first Senior Antiterrorism Officer for all Coalition Forces in Iraq, referred to the regime’s foiled bombing plot of the NCRI’s annual Free Iran gathering in 2018 in Paris, which led to the arrest of the regime’s so-called diplomat Assadollah Assadi. Assadi’s trial is set to be held in Belgium on November 17, 2020.

“For decades, the Iranian government has avoided judicial accountability as the No. 1 nation-state sponsor of international terrorism. This will end on November 27, 2020, in Antwerp, when Belgium’s criminal court commences proceedings against senior Iranian diplomat, Assadollah Assadi. In June 2018, as third secretary in the Iranian Embassy in Vienna, Assadi delivered over half a kilo of Triacetone Triperoxide (TATP) to Iranian sleeper agents in Luxembourg. TATP is a high explosive used in bombs, suicide attacks, and improvised explosive devices,” read Col. Martin’s article.

Al- Arabiya English: When will the UN condemn the 1988 massacre against political prisoners in Iran? 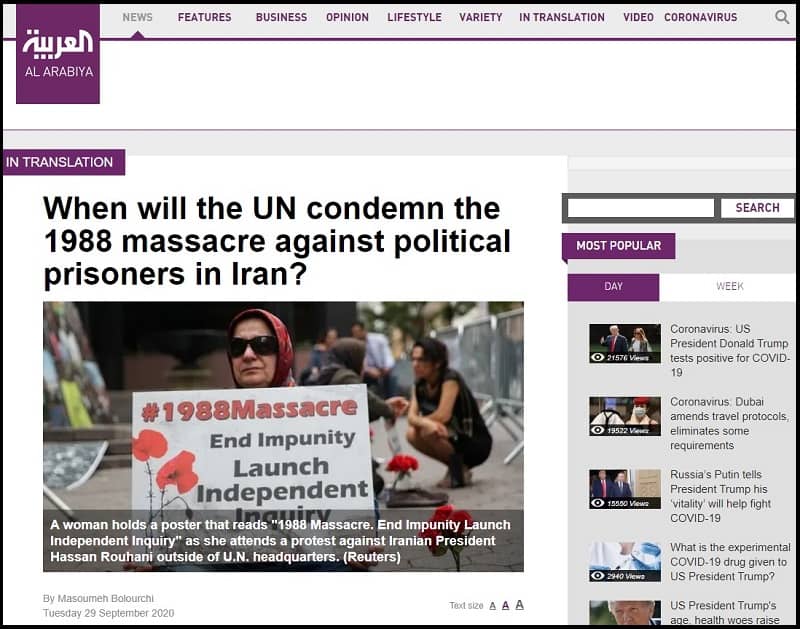 Ms. Masumeh Bolourchi, NCRI’s representative in Germany, published an article on Al-Arabiya English website on September 29, regarding the 1988 massacre of 30,000 political prisoners.

“It is time for the UN General Assembly to act on its resolution condemning the 1988 massacre of political prisoners by dispatching a fact-finding mission to Iran to investigate the crimes against humanity being committed in prisons in Iran. This is a request by the people of Iranian and freedom fighters across the world,” read the article.