As Iran’s people continue to grapple with poverty, state-run media identify mullahs’ corruption and plundering as real reason for this crisis
Due to extreme poverty, many children in Iran are forced to work
As the Iranian people continue to grapple with poverty and financial hardship, Iran’s state-run media admit how the mullahs’ corruption and plundering of the national wealth for funding terrorism has crippled the country’s economy. In this regard, the state-run Etemad daily on Sunday wrote: “The poverty line for a family of four is 10 million tomans. In recent years, all walks of life, especially the workers of our country have been affected by the most severe economic pressures such as rampant inflation, declining income, declining purchasing power, and increasing poverty. Now, with the increase of the dollar rate to 280,000 rials [ 290,000 rials as of September 29], difficult conditions have prevailed over the livelihood of the salary earners. A comparison of the 10 million toman poverty line with the 2.8 million toman minimum wage shows the absolute poverty of the working population and wage earners, who make up 60% of Iranian society. This is while the cost of living in metropolitan cities is estimated at 9 million and in small cities at more than 7 million tomans.” 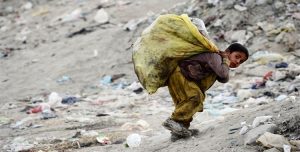 But what is the Iranian economy’s problem?

The state-run Bartarin-ha on April 16 wrote: “$4.8 billion dollars of governmental currency has vanished into the air.”

The state-run Aftab daily in an article on 11 November 2019 acknowledged that around $18 billion had vanished. “The government allocated most of this $18 billion worth of currency to some individuals. They sold the received currency in the open market without importing goods and made huge profits.”

The state-run Tabnak news agency on July 14, while quoting Abdolnaser Hemati, the regime Central Bank chief, wrote: “In the last two years, $27 billion in foreign exchange has been provided to exporters, and we have not imported goods and currency in return for that.”

Regarding the $27 billion that Hemati referred to, Majidreza Hariri, Chairman of the Iran-China Chamber of Commerce, told the state-run Keyhan daily: “Small businesses export $8 billion to $9 billion a year, and 50 percent of non-oil exports come from gas and petrochemical condensates, which are owned by state-owned companies.”

Hossain Raghfar, one of the regime’s economists, in April 2020 said: “While $20 billion disappeared from the country during a major corruption scandal, today we ask the World Bank to give us $5 billion. Yet, no one is accountable for this.”

In this regard, in an interview with the state-run ILNA news agency, a regime economist Farshad Momeni, while reacting to the regime’s demand for a $5 billion loan from the IMF, warned that due to the vast corrupting within the regime and lack of a clear economic plan in the country, demanding a loan from a foreign party would be “a tool to expand and deepen corruption, incapability and unjustifiable economic backwardness and inequality.”

But how would the mullahs use this money?

The regime has been plundering the national wealth to fund its illicit activities. Yet the mullahs have been whining about international sanctions, which are imposed due to the mullahs’ warmongering policies and human rights violations.

In this regard, the state-run Hamshahri daily, in an article on September 21, wrote: “They [regime’s officials] know everything, but their sensitivity about what threatens the system is far more than their sensitivity of what endangers people’s lives and belongings. They know what is happening, but since preserving the system’s security is very clear for officials, they not only increase the country’s military power but to defend the system, they identify the ‘strategic depth,’ and take necessary steps [to preserve it].”

In an interview with the state-run Etemad Online, Heshmatullah Falahatpisheh, a former Iranian top lawmaker, on May 20, said: “I went to Syria, some people said I made up some expenses, but I repeat, we may have given Syria $20 to $30 billion, and we have to take it back.”

Emad Abshenas, another of the regime’s officials, published an article on August 20, 2019 in sputniknews. This article, entitled “Iran’s problem is not sanctions, it is corruption,” read: “There are only four or five countries like Iran that have so many [natural] God-given resources. Even if you build a wall around them, Iranian people have everything they need in their country. If we pay attention to the embezzlements and abuses that take place in Iran, we see that two or more times the equivalent of Iran’s oil revenue is stolen only by these embezzlers and corrupt people.”

These facts confirm what Mrs. Maryam Rajavi, the president-elect of the National Council of Resistance of Iran (NCRI), had said: “So long as the mullahs are in power, they will continue to thieve, plunder and pillage the Iranian people’s wealth or squander it on belligerence, export of terrorism, and nuclear and missile programs.”