In recent weeks, the regime in Iran has elevated its blackmailing campaign to force the international community to succumb to the regime’s malign requests. Tehran announced it has started enrichment of uranium at 20 percent at its Fordow nuclear site. On Monday, the regime’s Revolutionary Guards (IRGC) illegally seized a South Korean ship in the Persian Gulf.

The international community should take firm action since Tehran’s ongoing belligerent activities have continued despite the Western powers’ persistence on the appeasement policies.

The regime has tried to blame the international community for not abiding by its 2015 nuclear with world powers, formally known as the Joint Comprehensive Plan of Action (JCPOA). Tehran also tried to accuse the South Korean ship of polluting the Persian Gulf.

Yet, the regime’s state-run Vatan-e Emrooz daily, an outlet linked to the IRGC, on Monday, confirmed the regime’s true intentions of these actions, which are part of its extortion campaign.

“Enriching uranium at 20% was [the regime’s] winning card in facing western governments. [Hassan] Rouhani’s government, at the beginning of the nuclear talks in Geneva two years before the JCPOA, generously accepted to halt in exchange for the lifting of sanctions and the recognition of Iran’s right to enrichment, none of which was realized. Now, in such circumstances, this concession can again force the JCPOA signatories to honor their obligations under the terms of the JCPOA, and thus return the balance in the number of obligations and duties to the nuclear agreement. In other words, experts believe that the beginning of Iran’s 20% enrichment could increase the probability of lifting sanctions much more than before,” Vatan-e Emrooz wrote on Monday. 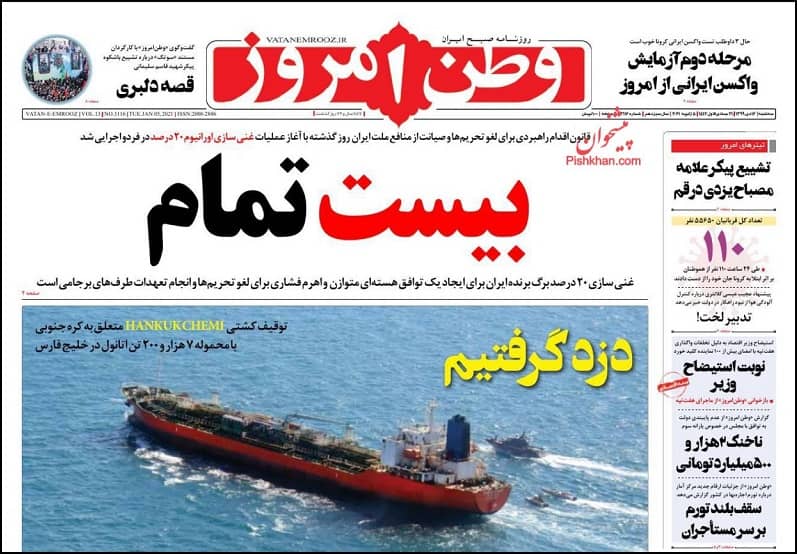 The Iranian regime’s state-run Vatan-e Emrooz daily
The regime started breaching its commitments under the terms of the JCPOA in 2018. This nuclear extortion was to force the European signatories of this agreement to provide financial incentive packages to the regime, which was under the United States’ sanctions.

The U.S. withdrew from the JCPOA in 2018, citing Iran’s non-compliance with the deal and its breach of the “JCPOA’s spirit” by spreading terrorism across the region.

The National Council of Resistance of Iran (NCRI), which has played a pivotal role in exposing the regime’s nuclear activities, later revealed how the regime deceived the international community and continued its nuclear weapon program while signing the JCPOA.

The European Union’s surprising fidelity to the already-dead JCPOA has encouraged the regime to count on the EU’s appeasement policy to continue its nuclear extortion and cite so-called “experts” on how enriching uranium at 20% will result in an end to the sanctions.
South Korean Ship.

“The seizure of this tanker in Persian Gulf waters sends a serious message to the South Korean government. A message that offers Seoul two options, either to choose to pay its long-standing debt to Tehran or (to compromise for the) security of its use of the Persian Gulf waterways in dealings with its Arab partners,” wrote Vatan-e Emrooz,

These words clearly confirm the regime’s state-sponsored piracy and terrorism. Yet, the international community has failed so far to act decisively.

The regime in Tehran has used extortion to achieve its malign goals. The first case was Iran’s hostage crisis in 1979 when the regime’s forces stormed the U.S. embassy in Tehran and took American staff hostage.

Simultaneous with Assadi’s trial on December 3 in Belgium, the regime announced it will hang Dr. Ahmadreza Djalali, an Iranian-Swedish academic who taught in Belgium. The regime’s Foreign Minister, Mohammad Javad Zarif, explicitly called for a prisoner swap, underlining the regime’s intention to use Djalali to put pressure on the Belgian government to free Assadi.

By seizing the South Korean ship and increasing its uranium enrichment level, the regime intends to exploit the political situation in the U.S. and put pressure on the international community to achieve its malign goals.

The European Union has long pursued the appeasement policy and provided the regime’s with incentive packages, but it has only emboldened the regime.

The international community, mainly the EU, should not succumb to the regime’s extortion campaign.

Tehran’s recent piracy, export of terrorism, and its systematic breach of the JCPOA are all punishable under international law. The regime’s leaders, such as its chief apologist Zarif, should be sanctioned, the international community should hold the regime to account for its destructive activities.