“No nation has seen so much injustice,” “We can only obtain our rights by coming out onto streets,” We will not rest until we obtain our rights”
Today, Sunday, March 14, 2021, for the eighth week running, retirees and pensioners staged protests in Tehran and 20 other cities against the lack of response to their abysmal living conditions, low wages, and high prices. They held placards demanding the provision of their rights.

In their protests and march today, the retirees chanted, “Threats and suppression are no longer effective,” “We can obtain our rights only by coming out onto streets,” “We will not rest until we obtain our rights,” “Imprisoned workers must be freed,” “Enough of oppression, our plates are empty,” “We are all together,” “Our wages are in rials, our expenses are in dollars,” “High prices, inflation, affecting people’s lives,” “Poverty line 130 million rials, our salaries 30 million rials,” “How can we live with wages below 30 million rials,” “Retiree rise, defend your right,” “The Government betrays, the Parliament supports it,” “Enough of promises, our plate is empty,” “No nation has seen such injustice.”

One of the retirees said in a speech in Arak, “Yesterday, a young lady jumped from a bridge in Shiraz. Why should it be like this? The cause is poverty, unemployment, and impoverishment. How much longer are they going to refuse to answer? Are they so callous?”

Mrs. Maryam Rajavi, the President-elect of the National Council of Resistance of Iran (NCRI), described the retirees’ continuous protests as an act of protest by the entire Iranian nation against the pillaging of their rights by the ruling religious fascism. She added that as the protesting retirees were chanting, “no nation has seen such injustice.” The NCRI’s President-elect underscored that so long as the mullahs’ dictatorship remains in power, unemployment, inflation, corruption, injustice, and class differences will only increase.

Secretariat of the National Council of Resistance of Iran (NCRI)
March 14, 2021 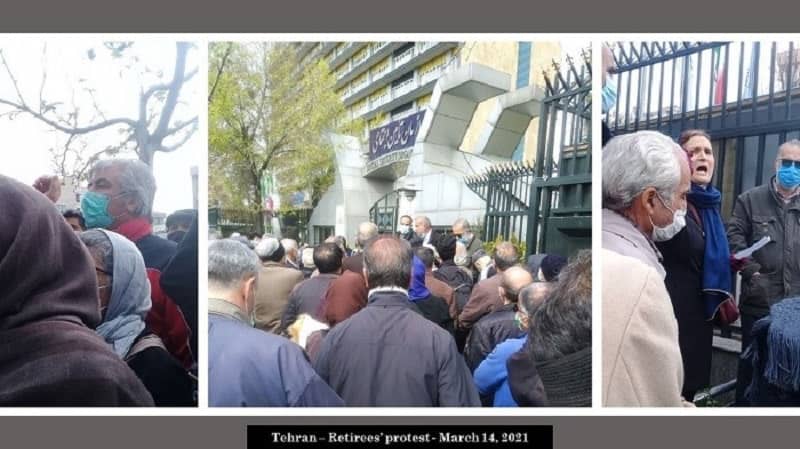 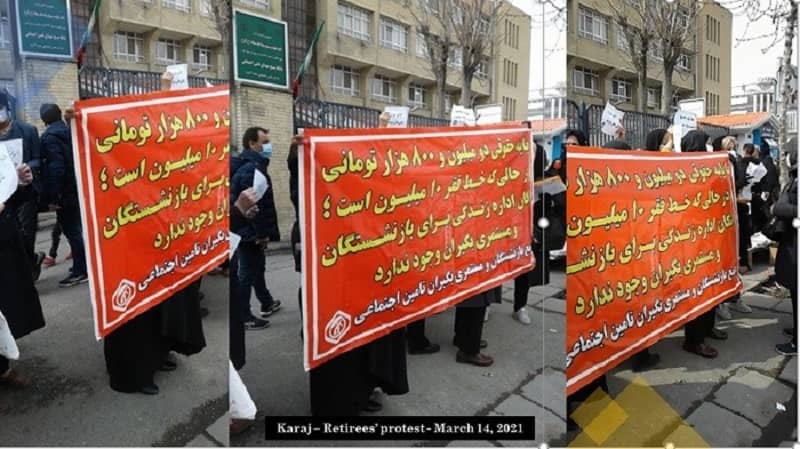