In a failed attempt to intimidate the public, the mullahs’ regime executed Navid Afkari, a 27-year-old wrestling champion arrested during the Iran protests in 2018. Instead, his execution increased people’s hatred toward the regime, and they honored Navid as what he truly was: a national hero.

In this regard, the defiant youths in the city Shiraz, south-central Iran, targeted the mullahs’ Supreme Court that had issued Afkari’s death sentence.

In this regard, the National Council of Resistance of Iran (NCRI) issued a statement on September 27.

“In the early hours of Sunday, September 27, 2020, in protest against the criminal execution of Navid Afkari, the Iranian national wrestling champion, the defiant youth targeted the court in Shiraz, which issued his death sentence and set fire to its entrance,” read the statement. 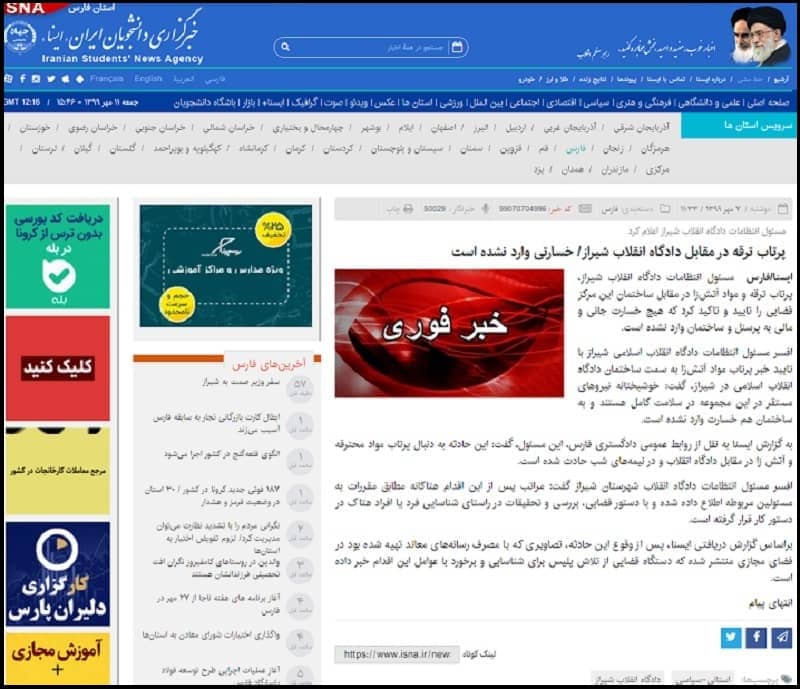 The ISNA news agency’s website
This attack by the defiant youths received vast media coverage both in state media and abroad. In this regard, the state-run ISNA news agency wrote: “The incident took place in the middle of the night after explosives were hurled at the Revolutionary Court’s entrance.”
Al-Arabiya also reported: “The video footage published by the NCRI… shows an explosion and fire at the entrance of the Shiraz Revolution Court.”

Since Navid Afkari’s execution, the MEK’s Resistance Units have carried out various activities across Iran condemning this execution and honoring Navid’s memory. In this regard, the NCRI wrote in a statement on September 24: “During the past week, Resistance Units and supporters of the Mujahedin-e Khalq (MEK / PMOI) continued to protest the execution of Navid Afkari, and Mostafa Salehi, as well as the death sentences issued for other detained protesters.” 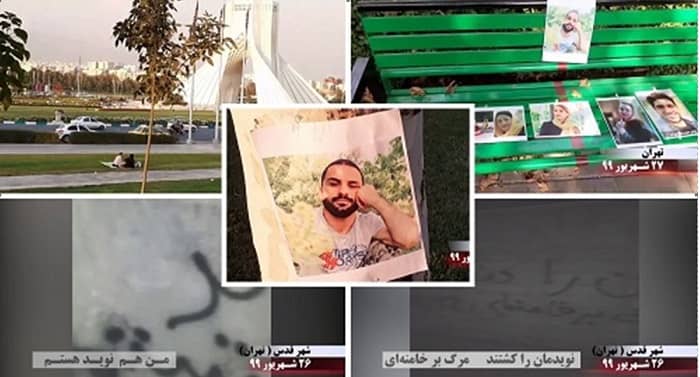 Tehran- Activities of the supporters of the MEK in protest against Navid Afkari’s execution – September 16, 2020
The MEK’s Resistance Units wrote graffiti and slogans on walls. Some of the slogans were: “The only way for preventing the execution of the likes of Navid is to revolt and protest,” “Navid Afkari’s execution is condemned, I am also a Navid Afkari”, and “Massoud Rajavi: The criminal IRGC must be disbanded.”

In a similar development on Wednesday, the defiant and rebellious youths targeted the Iranian regime’s court in Khavaran, near Tehran. The defiant youths attacked this court for its criminal decision to demolish the homes of impoverished residents of Khavaran. 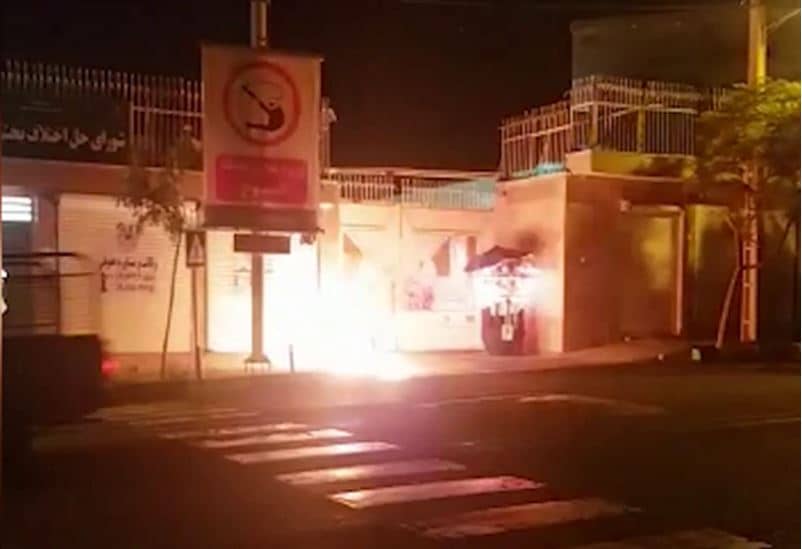 court, Iran, torching, IRGC, protests
The defiant youths attacked Iranian regime’s court in Khavaran
The regime has tried to use the coronavirus outbreak and its mass casualties, by systematic inaction and cover-up, as a barrier to another uprising. The major Iran protests in November 2019 and the unprecedented general boycott of the mullahs’ sham parliamentary elections made it clear that Iranian people want regime change. The recent activities of the defiant youths are testaments to the Iranian people’s desire for regime change.

The recent actions by the defiant youths and the MEK’s Resistance Units have also terrified the regime’s officials. In this regard, Farhad Bashiri, the regime’s Member of Parliament, on September 27 addressing officials said: “Gentlemen wake up. Please be careful of what’s happening inside [Iran] in the time left; pay attention to the youths and people.”

Iran: Ongoing Activities of MEK Resistance Units and Defiant Youths and Their Impact on Society