The prosecutors also demanded that Naami, Saadouni, and Arefani be stripped of their Belgian citizenships.

The prosecutor emphasized that the primary target in this foiled bomb plot was Iranian opposition President-elect Maryam Rajavi. He also underlined that Assadi had instructed Saadouni and Naami to install the bomb as close as possible to Mrs. Rajavi.

All the pieces of evidence suggest Assadi commanded this bombing operation. The highest authorities of the regime ordered and approved the 2018 bombing plot against the Free Iran gathering of the National Council of Resistance of Iran (NCRI).

Describing how Assadi was arrested in Germany, the prosecutor underlined he enjoys no diplomatic immunity.

The prosecutor also highlighted that the regime had not permitted Assadi to attend the first session of this trial, cooperate, and answer questions, which indicates that Tehran is behind this terrorist operation.

Since Assadi was working with the regime’s Ministry of Intelligence and Security (MOIS) and used his diplomatic cover for the terrorist operation, this was not a one-man initiative, and the entire regime was involved in this plot.

On Thursday, December 3, the Iranian Resistance delegation, headed by Mr. Farzin Hashemi, member of the NCRI’s Foreign Affairs Committee, held a brief press conference before the trial began. The following is the text of Mr. Hashemi’s remarks: 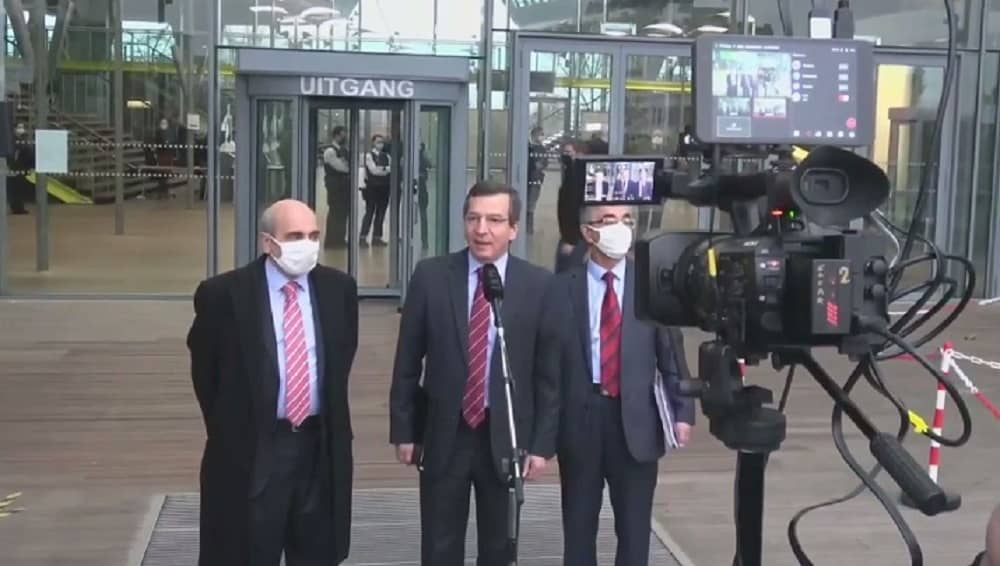 Farzin Hashemi, member of the NCRI’s Foreign Affairs Committee, holds a brief press conference
Farzin Hashemi’s remarks
Two days ago, the spokesperson for the Ministry of Foreign Affairs of the Iranian regime had called for this court to declare itself incompetent to judge this case. This is a ridiculous claim saying that this court is illegitimate and unlawful. For the mullahs in Iran, only courts are competent that issue verdicts of execution in a matter of a few minutes, without any due process. But now, we are here to express our views that this court has the competence to deal with this case. And the threat made by Assadi on the March 9, 2020, did not change this court’s course. Using blackmail has always been a notorious tactic used by the Iranian regime. Giving in to such demands, threats, or blackmailing will be counterproductive and embolden the regime to resort to more terrorism.

For this reason, we believe it is now time for an international tribunal to be set up and to prosecute the leaders of the regime, who are the true masterminds of hundreds of terrorist acts around the country. Let me also add that for Assadi’s claims that the people are watching, and if he is convicted, there will be retaliation. But of course, there are millions of people watching this case and this court proceeding, but not to retaliate, but to see that in democratic countries, the judiciary will act independently and free of any political consideration. And as you may have seen, just a couple of days ago, 240 members of parliament from across Europe issued a joint statement calling on the European Union to adopt a firm policy vis-à-vis the mullahs’ regime in Iran and reject any compromise. Supporting Mrs. Rajavi, the president-elect of the Iranian Resistance, they called on the European Union to designate the Islamic Revolutionary Guards Corps (IRGC) and the Ministry of Intelligence (MOIS) as terrorist entities and to withdraw the legal status of agents of the Iranian regime, whether it be refugee status or nationality, and then expel them from Europe.

They have also called for Europe that returning to normal diplomatic relations should be contingent on the Iranian regime giving assurances that there will be no more terrorist acts on European soil. Without that, it would further embolden the mullahs’ regime to engage in acts of terrorism in Europe. We hope that when this court confirms its competence and issues the verdict, as the prosecutor has requested, we will see the beginning of bringing the regime’s leaders to justice, whether in this country or around the world. I thank you very much.

Today marks the second session of the trial in Belgium of Iran’s diplomat-terrorist Assadollah Assadi and his three accomplices for the foiled bomb plot against the Iranian Resistance’s 2018 annual Free Iran gathering.