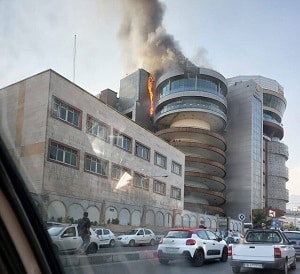 The Iranian regime’s spokesman of the Emergency Organization announced hours ago: “The Lidoma building in Sanat Square has caught fire and currently 4 ambulances have been sent to the scene.”

According to Borna news agency, Mojtaba Khaledi said that firefighters are still trying to contain the fire while rescue workers have evacuated up to the seventh floor.

A spokesman for the Tehran Fire Department declined to comment on the number of casualties.

According to reports and footage posted on social media, following police becoming suspicious of a vehicle on the Samirom-Yasuj axis in the Kohgiluyeh and Boyer-Ahmad Province, officers opened fire on the vehicle without warning and shot the young driver dead.

Despite police claiming that drugs were embedded in the vehicle, there were no illegal items found upon investigation. Following this crime, angry youths in the area clashed with police officers. The police fled the scene and one of their vehicles was set on fire by the youths. 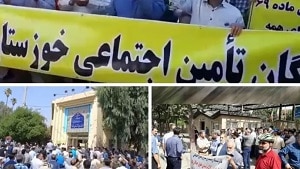 On June 18, the anniversary of the sham presidential elections of 2021, regime president Ebrahim Raisi, who spoke to a group of regime loyalists in Varamin, said, “The people wanted us to fight poverty, corruption, and discrimination,” and in the same speech, he claimed, “We remain loyal to our commitments.”

Ironically, while Raisi was marking the first year of his presidency, protesters in many cities were chanting, “Raisi you liar! What happened to your promises?”

Municipal Agents Raze Down the Shelter of a Female Teacher Municipal agents demolished the humble shelter of a female teacher in Rafsanjan, in southern Kerman Province. She was taking care of her ailing mother at the time of the attack by municipal agents who arrested her.

According to the reports published on social media on June 17, the shelter of a female teacher with 30 years of experience and a master’s degree was destroyed by Rafsanjan’s municipal agents. All her furniture and home appliances were buried under the rubbles.

4 Decades of Resistance for Freedom by Generation Equality in Iran June 20 marks the beginning of the Iranian people’s resistance for freedom and democracy in 1981.  Iran’s women pioneer their people’s movement against the mullahs’ religious dictatorship.

Generation Equality has been playing a significant role in the Iranian people’s resistance for freedom from the Shah’s time until today. Women who sacrificed their lives for freedom in the 1970s opened the way for women’s largescale participation in the movement. Then came another generation of women in the 1980s whose sacrifices and unsubmissive struggle shook the foundations of the mullahs’ misogynous regime. 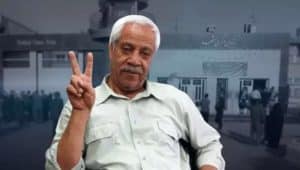 A political activist who is serving his prison sentence in Mashhad’s Vakil Abad Prison in northeastern Iran has been deprived of medical care. Prison officials have banned Hashem Khastar, who is also a teacher from receiving medical care outside of prison because he refuses to be transferred to the hospital with shackles on his hand and feet. According to a source close to Hashem Khastar’s family, he is suffering from digestive problems and high blood pressure. He is kept in a cell with two other political prisoners, Kamal Jafari Yazdi and Mohammad Hossein Sepehri and they have been deprived of communicating with other prisoners.

Stockholm, June 18, 2022: MEK Supporters Commemorated the Anniversary of the Beginning of the Resistance Against the Mullahs’ Regime

Stockholm, Sweden, June 18, 2022: Freedom-loving Iranians, supporters of the People’s Mojahedin Organization of Iran (PMOI/MEK), commemorated the historical day “30 Khordad” (June 20, 1981), the beginning of the Iranian people’s resistance against the mullahs’ regime and the day of martyrs and political prisoners in Iran.

Amsterdam, June 18, 2022: Iranian Resistance Supporters Commemorated the 41ST Anniversary of the Beginning of the Resistance Against the Mullahs’ Regime

June 18, 2022-Amsterdam, The Netherlands: A photo exhibition of the mullahs’ crimes in Iran.

Amsterdam, The Netherlands, June 18, 2022: Freedom-loving Iranians, supporters of the People’s Mojahedin Organization of Iran (PMOI/MEK), held a rally and a photo exhibition of the crimes of the mullahs in Iran during the last four decades in Dam square