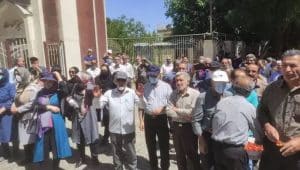 Following the appointment of Ebrahim Raisi as president of the regime ruling Iran by Supreme Leader Ali Khamenei, the mullahs’ propaganda machine began portraying him as a savior on a mission to resolve all crises riddling the country. Less than a year in office, people from all walks of life are taking to the streets of cities throughout Iran and chanting “Death to Raisi!” on a daily basis. Following is an update on the situation of 4 political prisoners, Monireh Arabshahi, Massoumeh Askari, Nargess Mansouri, and Samin Ehsani.

Monireh Arabshahi, the mother of political prisoner Yasaman Aryani and a civil society activist, suffered a sharp drop in calcium levels and numb parts of her body. After this incident, she was transferred to a civic, medical center on Tuesday, June 14, 2022. In addition to arrests, torture, and execution, a tool of suppression against the people of Iran is the compulsory Hijab. Since seizing power in Iran and instilling its patriarchal interpretation of Islam, the clerical regime has used the compulsory Hijab to humiliate and intimidate women. The weaker the regime gets, and the more it fears protests and being overthrown, the more it resorts to this dirty tactic.

Vienna, Friday, June 17, 2022: Freedom-loving Iranians, supporters of the National Council of Resistance of Iran (NCRI) and the People’s Mojahedin Organization of Iran (PMOI/MEK) gathered in Stephansplatz Square in support of the Iranian people’s protests and against the mullahs’ regime.