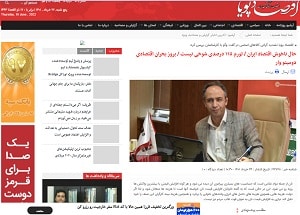 Vahid Shaghaghi Shahri, a state-affiliated economist told the Eghtesad-e-Pouia newspaper on June 14: “You cannot tie the soaring prices with elections. The problem is rooted in the last decade when we had a 24% inflation in the country. In the last three years, our country has had 115% inflation, and this has increased the prices of various goods in the country.”

He added: “The prices of assets such as land, housing, gold, and cars have increased due to the increase in the price of the dollar, and gradually the prices of goods and services have also increased.”

Vahid Shaghaghi also stated: “When liquidity is growing by 2,500 on a daily basis and our products rely on foreign exchange instead of domestic production, these two reasons increase the price of basic goods these days. Even though bread does not depend on foreign exchanges but a baker lives in this society and he has to pay the expenses. This will lead to more soaring prices and more poverty, but as long as we fail to have real domestic production, these things will be obvious.” 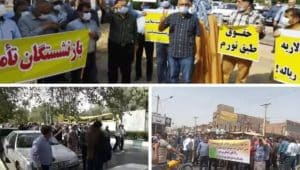 Retirees and pensioners of the Social Security Organization returned to the streets on Wednesday, June 15, for the ninth consecutive day of protest rallies against the government’s destructive polices and lack of response to their outstanding demands regarding low wages and pensions, insurance issues, and poor living conditions. Protests were reported in Tehran, Ahvaz, Dorud, Kermanshah, Shush, and other cities. Retirees and pensioners have been holding regular protests as their living conditions continue to deteriorate because of the nosediving economic conditions, escalating inflation, and skyrocketing prices of food staples, including bread, milk, dairy products, eggs, poultry, and cooking oil.

Iran: SDG2, What Are the Prospects for Zero Hunger? 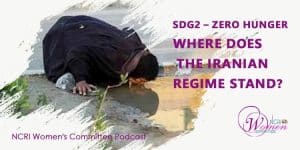 This time, we’re going to explore the NCRI Women’s Committee report to the UN Beijing +26 summit. This 300-page report comes in nine chapters and reviews the conduct of the Iranian regime 26 years after the Beijing Conference on Women’s rights.

We aim to review the parts of this report covering the Iranian regime’s measures concerning the Second Sustainable Development Goal of the UN, known as SDG2.

In the Qarchak torture chamber, women are deprived of water, air, and healthy food The notorious Qarchak Prison is the only women-only prison in Iran and the detention center for at least 2,000 women. This prison was a disused industrial chicken farm. Initially, it did not have the standards for a prison. The lives and health of all prisoners are in danger in the Qarchak torture chamber in Varamin. “This is the end of the world,” In other words, it is a place of torture, exile, and murder of women.

Women prisoners in Qarchak are deprived of the three vital elements for every human being: water, air, and healthy food. The Qarchak torture chamber is used as an exile for political prisoners. More than 200 political and civil activists and journalists signed a statement calling for the release of Keyvan Samimi, freedom of speech and thought advocate, journalist, and political prisoner.

In their statement, they said that the regime’s “inhumane treatment” of Keyvan Samimi was “attempting gradual murder.” 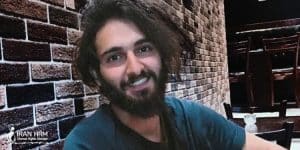 Authorities have banned political prisoner Saeed Eghbali from visits because of an open letter he wrote about executions in Rajai Shahr Prison.

Saeed Eghbali’s mother went to Rajai Shahr Prison to visit her son today but was not allowed to see him. According to an informed source, under the pressure of the Ministry of Intelligence, the political prisoner was deprived of face-to-face visits for three months and regular visits for a month.