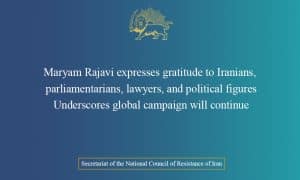 Mrs. Maryam Rajavi, the President-elect of the National Council of Resistance of Iran, extended her gratitude to all Iranians, parliamentarians, lawyers, and political figures participating in the global campaign against the shameful deal with the religious fascism ruling Iran to release the terrorist diplomat, who masterminded the plot to bomb the Free Iran World Summit 2018 near Paris. In particular, she thanked the parliamentarians, lawyers, and demonstrators in Belgium and their persistence against sacrificing justice, democracy, and human rights She noted: So far, they have laid many realities and discredited and condemned the auctioneering values and the rule of law.” 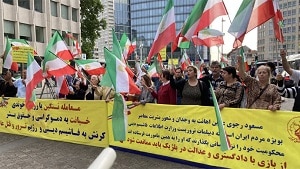 In her message of appreciation to all Iranians, parliamentarians, jurists, and dignitaries who have stood up against the disgraceful deal between Belgium and the Iranian regime, Mrs. Maryam Rajavi, the president-elect of the National Council of Resistance of Iran (NCRI), said, “So far, they have brought to light many realities and discredited and condemned auctioneering values and the rule of law.”

Mrs. Rajavi also stressed that the ongoing campaign by Iranian Resistance supporters in Belgium and 14 other countries is the “determining factor in enlightening and awakening the public opinion against this deal and underscored the necessity of continuing them.” The Qarchak Prison is the only all-women prison in Iran, where 2,000 women are packed in notoriously squalid conditions. Qarchak Prison is a disused industrial chicken farm in a desert area of eastern Tehran, falling far below international standards. The prison is a big hall with a high ceiling and without cells where 2,000 women live in the cold and heat without the minimum sanitary facilities. The prison is used as an internal exile for political prisoners. 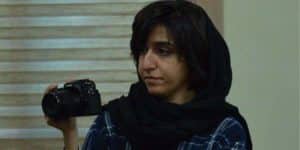 According to an informed source, “the labor activist couple has been denied the right to make phone calls with their families since almost 2 weeks ago.” Teachers’ rights activist Masoud Nikkhah is still in detention since May 1, when he was arrested for taking part in a peaceful teachers’ protest in the western city of Marivan. He has been taken to Ward 209 of Evin Prison in Tehran, controlled by Iran’s Intelligence Ministry. Mr. Nikkhah has not had any contact with his family. Masoud Nikkhah was arrested by the state security forces on May 1 along with a number of teachers and union activists and then transferred to the detention center of the news headquarters of the Sanandaj Intelligence Department. Nearly 800 days after Kurdish political prisoner Zeinab Jalalian was banished to Yazd prison she has been deprived of the right to visit her family and lawyer. She has also been denied medical care.

According to a source from Iran, “about 20 days ago, Ms. Jalalian’s elderly parents went from a long distance from Mako – Dim Qashlaq village to Yazd prison, but they were not allowed to visit their daughter.”