Iranian Foreign Minister Javad Zarif (left), Iranian diplomat-terrorist Assadollah Assadi (right)
Next Friday, four Iranian agents will stand trial in Belgium for a 2018 plot to blow up a gathering of Iranian expatriate activists. The proceedings are very likely to result in conviction for a high-ranking Iranian diplomat, Assadollah Assadi, who was arrested the day after the event and who later implied that additional terror plots would follow if he wasn’t released.

The erstwhile third counsellor at the Iranian embassy in Vienna was recorded on interview transcripts saying that there are militant groups in Iran and surrounding countries waiting to see whether or not Belgian authorities will “support them.” His remarks attempted something that his actions had not, in that they deflected responsibility for theoretical future attacks onto proxies that are not directly under the control of the Iranian government.

This sort of plausible deniability is a familiar feature of Iran-backed terrorism, but it was absent from the 2018 plot, which was to be carried out in a suburb of Paris, at the annual “Free Iran” rally organized by the National Council of Resistance of Iran (NCRI). In that case, Assadi personally transported explosive material and a detonator into Austria and then handed them off to an Iranian-Belgian couple in Luxembourg.

The diplomat’s direct involvement is comparatively unusual, but it came as little surprise to those who are intimately familiar with Iran’s use of terrorism as a form of statecraft. It is a common knowledge that there is diplomatic involvement in most Iran-backed terror incidents, even those that are channeled through proxy groups like Hezbollah. 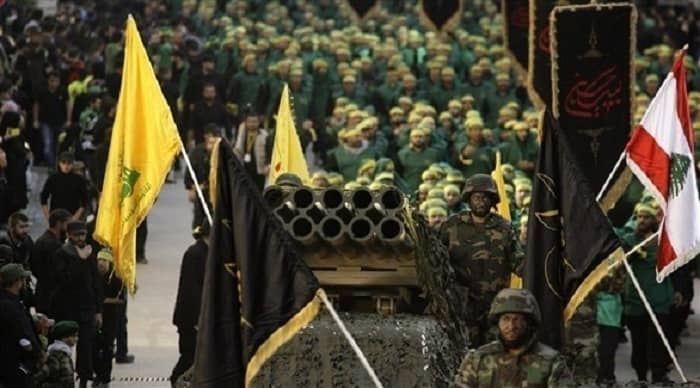 Hezbollah stages military parade in Lebanon
Indeed, Assadi’s effort to threaten Belgian investigators supports this conclusion. In claiming to understand the geographic reach and internal thought processes of various pro-Iran militant groups, he strongly implied that he’d had extensive contact with them over the course of his long diplomatic career. And Assadi would not be alone in this. Investigations into the 2018 terror plot have yielded public comments from a number of European experts affirming that the majority of Iran’s diplomatic personnel are actually operatives in its intelligence services.

Accordingly, those terrorist-diplomats tend to operate under explicit direction of the regime. This was certainly the case with Assadi, who was the object of concerted efforts by Iranian authorities to halt extradition and facilitate escape from justice. Fortunately, those efforts have come to naught, and it looks for all the world like the mastermind of the plot is about to face punishment for the attempted murder of Iranian activists and their political supporters. But it is not at all clear that accountability for the individual terrorist will translate into accountability for the regime that directed his actions.

Such broader accountability should certainly be expected, though. There is no serious doubt regarding the involvement of higher authorities in the 2018 terror plot. An initial French investigation yielded a government statement acknowledging that the order had come down from the regime’s leadership. And a more recent statement from the head of Belgian state security said precisely the same thing. The NCRI itself placed ultimate responsibility for the plot upon the Supreme National Security Council, which answers directly to both the president and the supreme leader.

So far, Western policymakers have seemingly maintained their adherence to the status quo. Many have continued to prioritize preserving the 2015 Iran nuclear deal over confronting the more recent malign activities emanating from Iran. More generally, they have continued to affirm the supposed value of engaging with the Iranian regime, and its Foreign Minister Javad Zarif as if they are all functionally indistinguishable from their counterparts in democratic nations without a decades-long history of terrorism.

This mentality should have been seriously challenged immediately after Assadi’s arrest. But now that that opportunity has come and gone, his trial represents the last chance for the international community, particularly the European Union, to react appropriately to a major terrorist plot on Western soil. And considering that the mastermind behind that plot was a major player in Iranian diplomacy, it stands to reason that an appropriate reaction would include much closer scrutiny of other such diplomats, especially the foreign minister.

The Iranian embassies should be closed throughout the world, because the recent events reveal that they were used for terrorist planning, financing, and armament.

Investigations into the 2018 terror plot have already gone a long way toward revealing the inherent danger in allowing Iranian operatives to travel freely throughout the Western world. That danger is not diminished if those operatives happen to fill a diplomatic role or if they have benefited from a questionable reputation as political moderates.

The United States has already rightly discarded that reputation for Javad Zarif, subjecting him to economic sanctions, identifying him as more of a “propaganda minister” than a foreign minister, and limiting his movements on American soil. European governments would do well to follow this example and to set new standards.

The foundation for such a change in policy was laid the moment Assadi came under scrutiny by Western law enforcement. The results of that scrutiny have been gradually leaked to the public over the past two and a half years, but they will be laid bare, practically in their entirety, on November 27. If, after that time, anyone still sees value in treating the Iranian regime as they would any other country, they must face serious questions about just how great a threat the regime can levy against its adversaries before this political calculation changes.