Iran’s sham presidential election is set to take place on June 18. All developments so far indicate that the regime’s Supreme Leader Ali Khamenei will pull Ebrahim Raisi out of the ballot box. Raisi, the current judiciary chief, has a dark record of human rights violations. As one of the regime’s highest officials, Raisi has also played an important role in spreading terrorism.
Ebrahim Raisi, Chief Regime Henchman Vies for Iranian PresidencyMay 12, 2021

The Iranian regime has been funding terrorism and spreading chaos in the region since taking power in 1979.

No matter who Khamenei chooses as his regime’s next president, the regime’s support for terrorism continues. But Raisi’s selection as the regime’s new president, in line with Khamenei’s policy of consolidating power in the regime, means the regime would further escalate, spreading chaos.

To understand how Ebrahim Raisi’s selection as president will impact the regime’s export of terrorism, let’s look at some facts:

“The Resistance is the best and most effective strategy in the region,” Raisi said on October 28, 2020, in a meeting with the Syrian’s then-Ambassador, referring to terrorist groups and the vicious dictatorship of Bashar-al Assad as the “Resistance” movement.

Before becoming the regime’s judiciary chief, Raisi was appointed as the head of the Astan-e Quds Razavi (AQR). Astan-e Quds Razavi is the biggest Islamic financial endowment (Moqofati). According to an exclusive report by the National Council of Resistance of Iran (NCRI), the AQR “enjoys tax exemption; its assets include 50 large companies and 43 percent of Mashhad real estate, the second-most populous city in Iran. In other words, AQR owns over 13,000 acres of land in Mashhad alone.”

The AQR funds many terrorist organizations and institutions. One of these institutions is the “New Horizon Organization” (In Farsi, it is called Ofogh No Organization). In 2019, the U.S. sanctioned this institution and its president Nader Talebzadeh, who cooperates with the Islamic Revolutionary Guards.

The New Horizon Institution had recruited Monica Witt, a former US Air Force intelligence officer, with access to classified intelligence. It was later revealed in 2019 by the U.S. government. According to the NCRI’s report, “The IRGC’s Quds Force recruited Ms. Witt following her participation in two international conferences the New Horizon held in support of the Quds Force.” 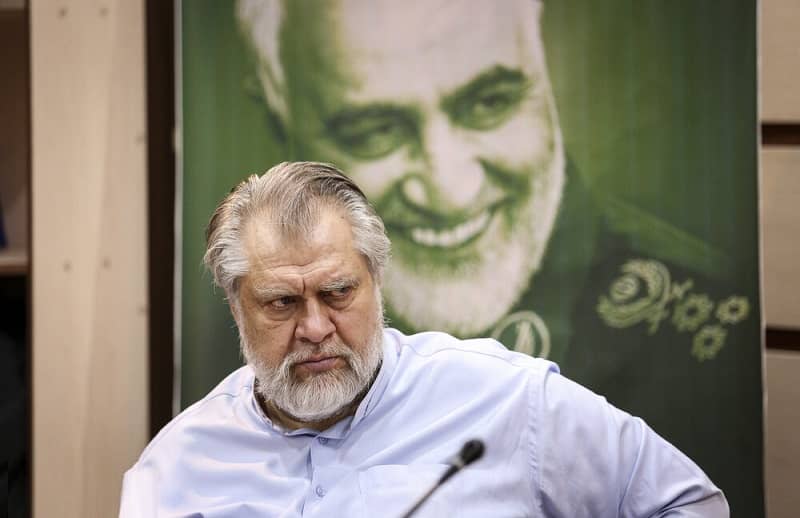 Nader Talebzadeh, head of the “New Horizon” organization, a front organization of the Revolutionary Guards (IRGC)

“Monica Witt, who later chose the name ‘Fatemeh Zahra,’ went to Iran to participate in the IRGC’s ‘Hollywoodism’ conference held under the New Horizon’s cover in January 2012,” NCRI’s report adds.

In addition to funding front organizations like the New Horizon, AQR funds terrorist groups such as Hezbollah. According to the NCRI’s report, “Ebrahim Raisi, the custodian of Astan-e Quds (now the regime’s judiciary chief), personally visited Lebanon at the end of January 2018 and met Hezbollah leaders, including Secretary-General Hassan Nasrallah. He also visited Hezbollah’s military positions in southern Lebanon.”

“Raisi met with the family members of the highest-ranking commanders Hezbollah involved in the regime’s terrorist operations, who were killed and expressed his support of them. These include Imad Mughniyeh, the second-in-command of  Hezbollah and its former military commander, who was personally involved in some major terrorist operations against western targets such as the hijacking of TWA Flight 847 in 1985, killing U.S. Navy personnel, and planning bombings at the U.S. Embassy and Marine Base in 1983” NCRI’s report adds.

“On July 14, 2019, a delegation of the AQR Met with Qais al-Khazali, leader of the terrorist group of Asa’ib Ahl al-Haq in Iraq. According to the group’s official website, the delegation praised Qais al-Khazali for his so-called ‘defense of the rights of the Islamic Ummah’ and gave him an Astan-e Quds’ flag,” NCRI’s reports writes in this regard.
Iran’s Regime Pays Terrorist Quds Force Mercenaries Five Times More Than Iranian Nurses

On July 21, 2018, while still caretaker of AQR, Ebrahim Raisi hosted Soleimani in Mashhad and offered him the highest honorary title of AQR. Soleimani even took part in the ceremony of dusting the tomb of Imam Reza.

On the same day, Astan-e-News, the news outlet of AQR, wrote, “Today, Commander (Soleimani) came to Mashhad alone, but it was as if thousands of martyrs, protectors of the tombs and Islam, and millions of hearts filled with the love of the Imam of compassion in Iraq, Syria, Yemen and other nations of Islam, were visiting the tomb with their commander.”

According to the NCRI’s report, “Astan-e Quds Razavi also supports family members of Iranian agents who have been killed, including members of terrorist groups like Hezbollah, as well as agents in Iraqi, Syria, Nigeria, and so on. The regime organizes pilgrimage and tourism in Iran and uses this for further terrorist and extremist recruitment.”
Conclusion

A glance at Raisi’s record in promoting terrorism, along with its dark record of human rights violations, underlines that his selection as the regime’s next president would further increase chaos, both inside and outside Iran.

Khamenei is willing to pull Raisi out of the ballot box to consolidate the power in the regime to face Iran’s restive society. By increasing terrorist activities, the regime intends to put pressure on the international community. The international community should indeed confront the regime’s extortion campaign. The recent trial and conviction of the regime’s diplomat-terrorist Assadollah Assadi in Belgium, who had attempted to bomb the opposition rally in France in 2018, once again showed that Tehran’s malign activities are not limited to Iran’s borders or in the region.

In recent months, calls for boycotting the regime’s sham election have amplified across Iran. The Iranian people do not want this regime and see regime change as the real solution to their ongoing problems.

The international community, given the regime’s terrorist threats, should join the Iranian people in their quest for freedom and democracy. The world powers should call the upcoming sham election illegitimate and further increase pressure on the mullahs’ regime. This is the durable solution to Tehran’s terrorist activities in the region