Iran is now amid an air pollution crisis, making the coronavirus outbreak deadlier for Iranians. Like the Covid-19 outbreak, the air pollution in Iran is the direct result of the regime’s wrong policies, and the mullahs are using it to silently kill Iranians and make more money.

On Sunday midnight, the regime cut the electricity in Qazvin, Golestan, Qom, and some other provinces without previous notice, forcing millions to cope with the cold weather, as cold as -6.

On Monday morning, the regime’s officials announced people have to endure long sessions of power outages. The Qazvin Province’s Electricity Company announced that every night from midnight to 4:30 am, there will be a power outage. The state Radio and Television announced that a power outage was planned in large areas of Gorgan, in Golestan province. Yet, the electricity was cut off without previous notice.

The regime’s officials claim that due to high gas consumption by the people, they are unable to supply the gas needed for power plants. Therefore, power plants have to use fuel oil to generate electricity. In other words, the regime is forcing people to choose between suffocation in a highly polluted air or freezing to death in winter. The main cause of Iran’s dangerous air pollution is the consumption of Mazut (fuel oil or black oil) in power plants and major industries.

Officials’ remarks of Iran lacking gas is a blatant lie and an attempt to cover up the regime’s role in polluting the air. Iran’s discovered gas reserves to date are 33.2 trillion cubic meters, and it has 17.2% of the world’s total gas.

The regime exports gas to at least five countries, and the reported amount of Iranian gas exported to Iraq is 25 million cubic meters per day, which, according to the state-run IRNA news agency, supplies five key Iraqi power plants.

Despite the regime’s claims, Iran does not face a gas shortage. The officials’ real goal is to pursue the regime’s policy of plundering the national wealth for funding their illicit activities. To have further benefits, the regime wants to export more gas, which requires the transfer of less gas to domestic power plants.

Thus, instead of gas, the regime supplies power plants with fuel oil, which is the worst and most toxic type of fuel for polluting the air. At the same time, they blame the people. “If the people’s consumption of electric heating devices is reduced by one degree, the needs of the industries for gas that caused them to cut off their gas will be compensated,” said Tehran’s governor Mohsen Bandpei on December 30.

The regime’s deliberate inaction in the face of all crises in Iran worsens them. Like the current air pollution crisis, the regime’s mismanagement of the coronavirus outbreak and keeping the economy open despite the rising death toll is meant to on the one hand further plunder the nation, and on the other hand quell the restive society and push it more into the swamp of misery and passivism, using the high mortality rate of natural crises.

Yet, the regime’s criminal gamble with people’s life is a paradox. On the one hand, in times of economic suffocation, it does not want to give up the consumption of deadly fuel oil. On the other hand, the regime faces the anger of deprived people. The nightmare of the major Iran protests in November 2019, which rattled the regime’s foundation and was initially triggered due to the sudden fuel price-hike, still haunts the regime’s leaders. The regime’s fear of Iran’s restive society is reflected by the mullahs’ increasing executions.

Regarding the air pollution crisis, Mrs. Maryam Rajavi, the President-elect of the National Council of Resistance of Iran (NCRI), said that on the one hand, the inhuman clerical regime squanders the Iranian people’s wealth on the unpatriotic nuclear, missile, and terrorism projects. On the other hand, it kills people through the consumption of fuel oil. The mullahs’ only concern is to preserve their regime. For them, the lives, health, and well-being of the people are worthless. As long as this regime is in power, there will be no attempt to buy vaccines, no clean air, and no solutions to contain the damage caused by floods and earthquakes. 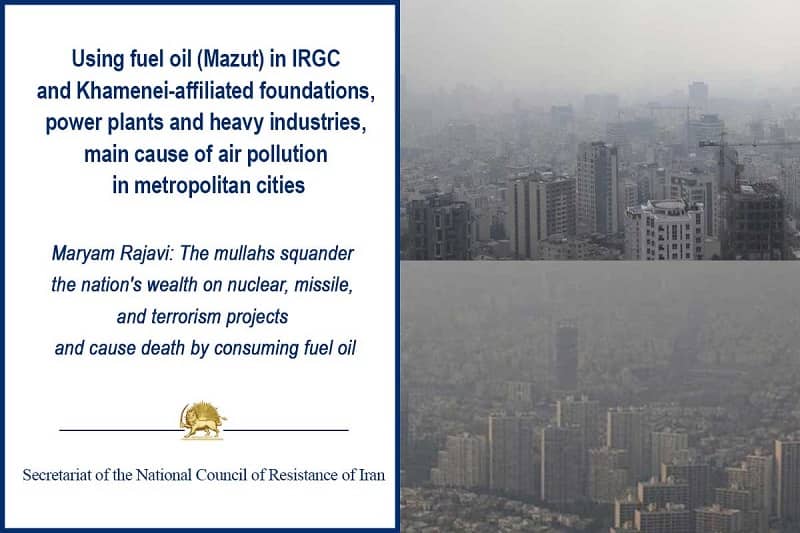