Tehran- Resistance Units activities-“The overthrow of the inhuman enemy is inevitable” – June 8, 2022
NCRI logo
Written by
Secretariat of the National Council of Resistance of Iran (NCRI)

On Wednesday, June 8, 2022, in continuation of the anti-repression campaign, supporters of the Mujahedin-e Khalq (MEK/PMOI) and the Resistance Units in Tehran and various cities including Ahvaz, Shiraz, Tabriz, Gorgan, Rasht, Mashhad, Isfahan, Sabzevar, Qom, Falavarjan, Shahriyar, Meshkinshahr, Minab, Bandar Abbas, Islamabad, Shahr Rey, Chabahar, Ramshir, Ramhormoz, and Jahrom posted banners and placards and wrote graffiti, encouraging the public to rise up to overthrow the clerical regime and to liberate Iran from the clutches of the mullahs, and expressed their solidarity with the people of Abadan by sending audio, video and photo messages.

The banners and placards read: “Massoud Rajavi: “The overthrow of the inhuman enemy is inevitable,” “Maryam Rajavi: we can, and we must overthrow the Velayet-e Faqih regime,” ” Massoud Rajavi: No power in the world can prevent the uprising and victory of the Iranian people,” “No to the Shah, no to the mullahs, damned be both of them,” “Death to Khamenei, damned be Khomeini,” “Death to the dictator, Abadan is not alone”, “Overthrow of the regime by Resistance Units, ” “Death to the commander of dictators, Seyed Ali (Khamenei),” “Khomeini, the executioner, shame on you,” “Let’s turn the uprising of the brave people of Abadan to a nationwide uprising,” and ” Let’s rise in solidarity with the oppressed people of Abadan.”

Part of the audio and video and photo messages read: “Abadan is not alone and we always stand with Abadan”, “We are all together and we shall send this dictator to the dustbin of history”, “Unity, unity to overthrow the clerical regime,” “Long live Iran, long live the Iranian people”.

Pictures of some of these activities can be seen below. 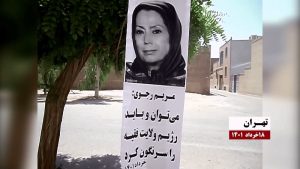 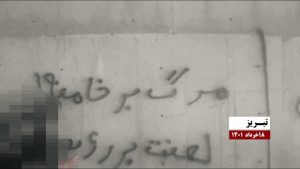