Under the clerical regime’s rule, Iran is facing an unprecedented environmental crisis with diminishing water resources, deforestation, rapid desertification, and air pollution choking its cities. These problems, if left unchecked, threaten not only Iran but also the stability of the region and the globe. Environmental scientists have for years underscored the gravity of Iran’s environmental threat and the seriousness with which the Iranians are approaching it.

Tehran is consistently advocating to prove that these calamities are due to global warming, sanctions, and persistent droughts, but it has to be emphasized that all such crises are the results of extreme mismanagement, the plundering of Iran’s natural ecosystem, and the oppressive rule of the clerical system. 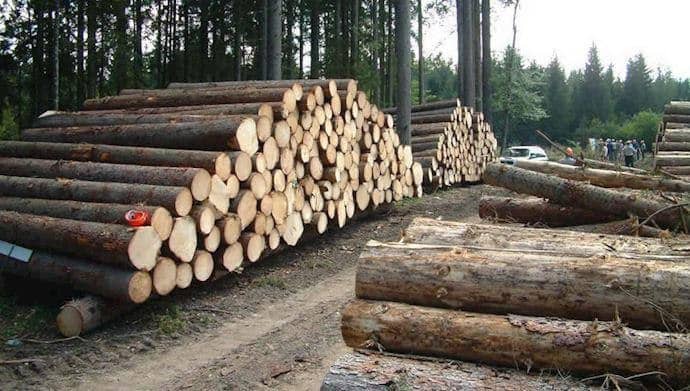 iran-environment-irgc-forestation
Environmental stability is indeed national security, more important than foreign threats or domestic issues, as it affects food security, domestic stability, and economic growth. Now, the severity of the environmental challenges is reflected in Iran’s daily demonstrations, uprisings, and all aspects of Iranians’ lives.

It is important to note that Iran’s many existing environmental challenges might contribute to threats on the regional and global levels, especially given the volatile landscape of the region. The effects of environmental degradation in Iran have already caused internal political unrest and threaten to prevent the country’s economic and social wellbeing. If nothing is done, it will certainly make the already turbulent situation in the country even less stable. Unhealthy environments, toxic air, lack of water, desertification, and subsidence of agricultural lands have the potential to prompt massive migration of people in search of sustainable livelihoods. This is a direct consequence of mismanagement, plundering of the Iranian people’s much-needed wealth for terrorism, and lack of government response to the basic needs of the population, which prompts the masses to bring their demands to the streets, as they have done in recent days…

Aquifers are being drained faster than they can be replenished, causing water resources to be diminished, which forces farmers to leave their villages. Thus, these migrated farmers are being added to the margin of cities and towns, putting more pressure on scarce resources. Air pollution has made living conditions in Iran’s cities increasingly challenging, and floods and wind erosion are furthering the desertification of agricultural land, creating greater production demand on remaining arable areas. Biodiversity is under severe threat too. 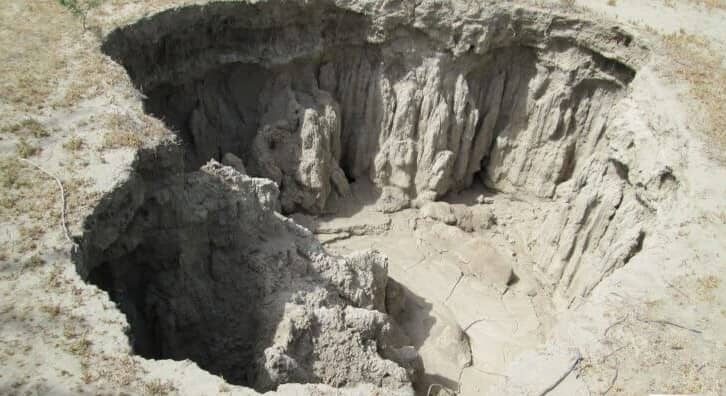 iran-environment-irgc-subsidence
For the above-mentioned reasons, rapid desertification is causing Iran to lose more than two-thirds of its agricultural lands. Air pollution is so severe in Tehran and most large cities that schools, businesses, and government offices must be regularly closed because of dangerously high levels of particulate matter. Over 40,000 air pollution-related deaths are reported annually in Tehran. Tehran and other large Iranian cities are among the top ten most polluted cities in the world.

Iran’s clerical rule stands in fundamental contrast to democracy. It usually has no highly developed institutional guidelines, doesn’t tolerate pluralism and social organizations, lacks the power to mobilize the entire population in pursuit of its goals, and exercises extreme oppressive power within relatively predictable limits.

The Leadership of Iran, in tight association with the Islamic Revolutionary Guard Corps (IRGC), has created a prolonged, self-promoted environmental crisis that is primarily the result of incompetence, absolute mismanagement, and systematic corruption at every level, especially at the highest level of the regime. This union has promoted and practiced an intentional war against Iran’s natural ecosystems, standard scientific practices, and experts’ advice since 1979, the inception of the Islamic Republic. 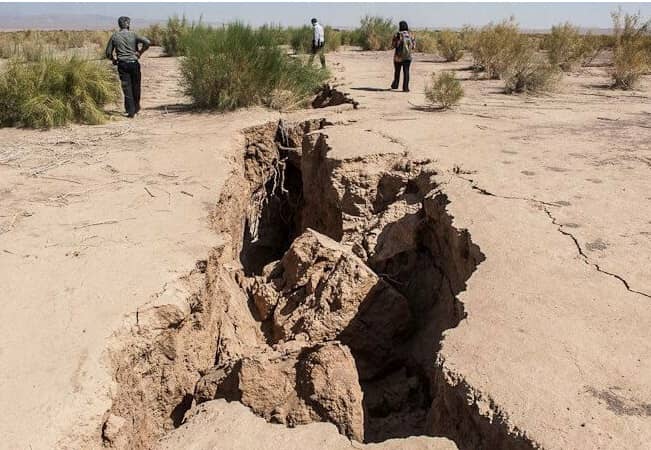 iran-environment-irgc-subsidence 2
Iran’s leadership has consistently pursued agricultural and industrialization policies with clear intention to benefit elite figures that the regime has sought to appease. The regime has accordingly diverted water and other natural resources away from ordinary Iranians and poorer communities, who have disproportionately suffered environmental consequences like water shortages, loss of arable farmland, sand, and dust storms. 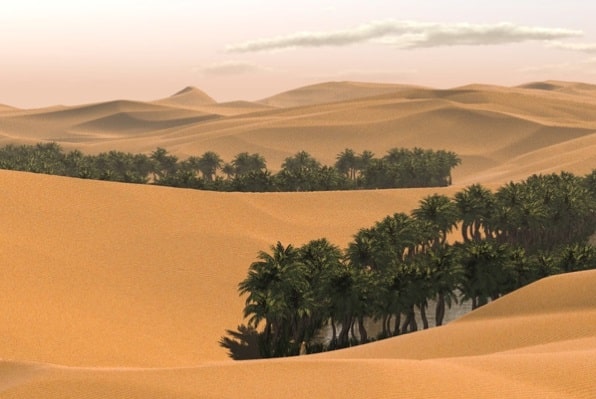 iran-environment-irgc-desertation 2
Iran’s policy missteps have given rise to multi-prolonged environmental crises, such as water and power shortages, widespread drought, desertification, destruction of wetlands, aquifers, forests, rangelands, the sinking of plains, sinkholes, and alarming air quality. Iran’s environmental deterioration poses a potentially destabilizing risk to the clerics, as it threatens internal cohesion, public health, and the economy.

The clerical leadership has inflicted irreversible damages on the country’s environment that experts fear will have catastrophic humanitarian repercussions as the country is experiencing in various provinces now. Due to the regime’s structural setups largely borne of corruption, the clerics have seriously failed to acknowledge the scope of the impending crisis, let alone the adaptation and implementation of vitally necessary corrective measures, which may already be insufficient and impossible at this time. 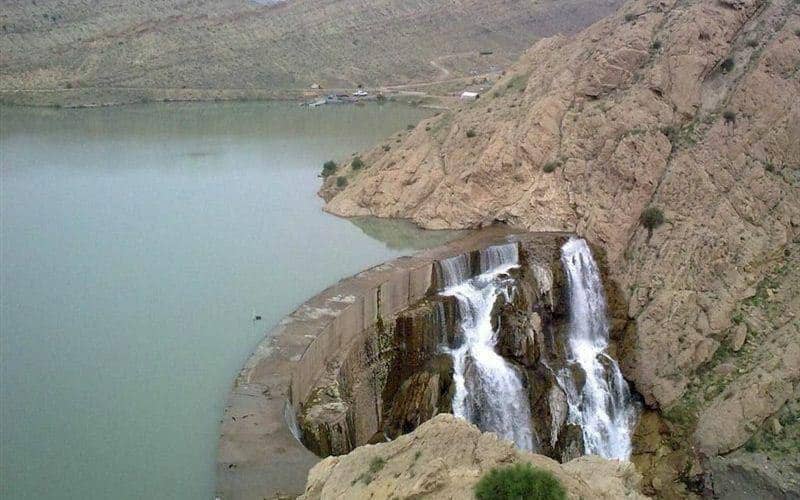 iran-environment-irgc-dam
One of the most significant and lasting consequences of the Iran–Iraq War was the empowerment of the IRGC. The war transformed the group from a hastily organized militia into one of Iran’s most powerful institutions. The IRGC emerged from the crucible of the war as a formidable fighting force with considerable organizational and engineering prowess. Under orders of Supreme Leader Khamenei, the IRGC formed a civil construction and engineering arm after the war called Khatam al-Anbiya, which helped secure the IRGC’s entrenchment and continued relevance even in peacetime.

Every faction of the clerical regime sought to establish patronage links to the IRGC. As a result, Khatam al-Anbiya began winning tenders and bids to build dams, railroads, refineries, harbors and expanding its influence in every aspect of Iran’s economy. Mahab Ghods is linked to Iran’s largest charitable holding foundation, Astan Quds Razavi, a bastion of support for Iran’s hardline clerical establishment, and one of the wealthy foundations under the Supreme Leader’s supervision. The revenues generated from dam construction help the Supreme Leader keep his core constituencies, the IRGC and hardline clerical establishment, satiated, incentivizing their continued loyalty to Khamenei. 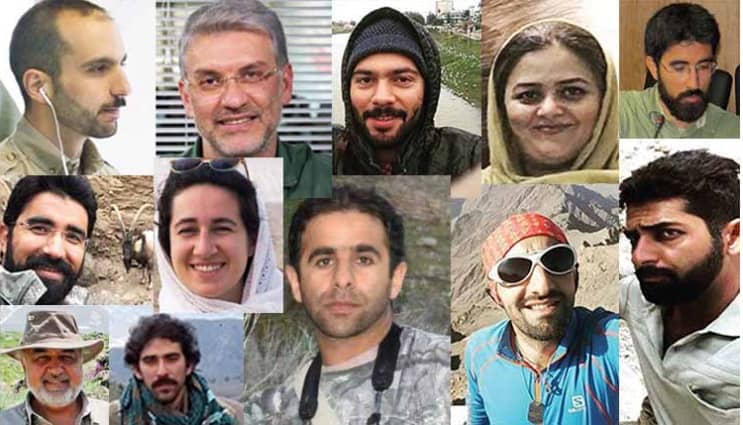 Iran under the clerics is currently faced with the most critical environmental issues in its history. Its climate lives, natural ecosystem, and its future as the cradle of civilization are all at risk. While the magnitude of that thought can be extremely overwhelming, we mustn’t feel hopeless, helpless, or uncertain of where to begin. We are calling on the civilized world, environmentalists, and experts to stand alongside the Iranians and their legitimate resistance under the leadership of Mrs. Maryam Rajavi to denounce the brutal clerical regime, which is not only the enemy of humanity but also extremely dangerous for the global environment and the world’s peace and security.

* Khalil Khani is an Environmental Specialist and a Human Rights activist. He holds a Ph.D. in Ecology, Botany, and Environmental Studies from Germany and has taught at the University of Tehran and the Hesse State University in Germany. He is also a Doctor of Medical Psychology from the United States.