On the third anniversary of the major Iran protests in January 2018, Amnesty International released a statement, underlining how the international community’s inaction has granted impunity to the regime’s authorities to kill, detain and continue harassing protesters.

“On the third anniversary of the nationwide protests of December 2017 and January 2018, Amnesty International renews its calls for justice for the dozens of protesters, including children, who were killed by Iran’s security forces across the country, and their bereaved families. The organization also stands in solidarity with those seeking truth and accountability for the thousands of protesters who were arbitrarily detained, those who suffered torture or other ill-treatment in detention, those who died in custody in suspicious circumstances and those who were subsequently sentenced to death or executed following grossly unfair trials,” read the statement. 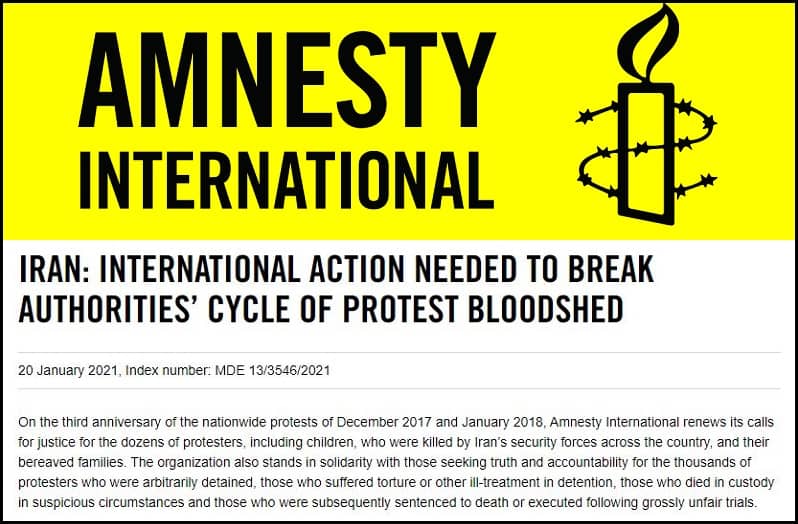 As the Iranian Resistance revealed during the first days of the uprising in 2018, the regime’s security forces, by the direct order of Supreme Leader Ali Khamenei, opened fire on protesters killing dozens. The regime continued killing the protesters under torture, or later executing them. Mostafa Salehi, who was arrested during the 2018 protests in Isfahan province, was executed in August 2020.

“Iran’s Year of Uprising”
Amnesty highlighted that the authorities have refused to open “even a single criminal investigation” into the crimes committed during the 2018 protests. The regime will certainly not do so, since expecting the regime to investigate its own crimes is like asking an arsonist to put out the fire.

“The impunity emboldened the authorities to escalate the unlawful use of lethal force in Nov 2019 protests. The cycle of bloodshed must not be allowed to continue. The international community must pressure Iran to end the recurrent pattern of using lethal force to crush protests,” the Amnesty International statement added.

Indeed, the systematic impunity enjoyed by the authorities has not just resulted in the killing of 1500 protesters during the 2019 Iran protests. The international community’s inaction has rendered this systematic impunity to the mullahs’ regime, when it chose to turn a blind eye on the regime’s worst “crimes against humanity,” as recently described by Seven United Nations experts.

In their letter, published in December, the UN experts pointed out that the 1988 massacre in Iran “may amount to crimes against humanity.”

In the summer of 1988, following a fatwa by the regime’s then-Supreme Leader Ruhollah Khomeini, so-called “Death Commissions” carried out extrajudicial executions, killing at least 30,000 political prisoners.

VIDEO: The untold story of the 1988 Massacre in Iran
Like Amnesty, the UN experts also highlighted the “systemic impunity enjoyed by those who ordered and carried out the extrajudicial executions and enforced disappearances.”

The UN experts also underlined how the failure of the international community to “act” regarding the 1988 massacre “had a devastating impact on the survivors and families as well as on the general situation of human rights in Iran and emboldened Iran to continue to conceal the fate of the victims and to maintain a strategy of deflection and denial that continue to date.”

This inaction has emboldened the regime to reward perpetrators of the 1988 massacre. Ebrahim Raisi, aka the “hanging judge,” and Alireza Avaei, the regime’s chief justice and minister of justice respectively, are holding these positions, due to their active role in the 1988 massacre.

It is no surprise that human rights violations continue in Iran, when Raisi is the regime’s chief justice.

Sadly, the world community has continued its inaction facing the ongoing human rights violations in Iran. The international community and its leaders, particularly European leaders, have not gone beyond condemnations and resolutions.

While the European Union had adopted a “Magnitsky Act” or the new global sanctions regime against human rights violators, the EU chief Diplomat, Josep Borrell was scheduled to deliver a joint keynote speech with Iran’s foreign minister Mohammad Javad Zarif on December 12 during a business forum.

This event was canceled due to the execution of Ruhollah Zam, a French resident, at the very last moments. Yet, the organizers of this event hoped they would hold another forum in the “near future.”

Negotiating with a regime, and addressing Zarif, who had threatened dissidents with being “eaten alive,” only emboldens the regime to continue its human rights violations.

As international outcries by independent sources, such as Amnesty or the UN experts, continue to grow, the EU has this momentum to set the record straight by holding the Iranian regime to account for its gross human rights violations.

The EU should use the Magnitsky Act and impose sanctions on the regime’s authorities, including Zarif. All relations with the regime should be contingent on a halt to human rights violations.