Christoph De Vries speaks at the event
On Thursday, the German representative office for the National Council of Resistance of Iran (NCRI) held an event to highlight the worsening problem of human rights abuses in Iran. A number of demonstrators gathered outside of the German Bundestag along with several German lawmakers, while others participated in the event remotely by way of streaming video. Many of their speeches emphasized the Iranian regime’s perennial abuse of capital punishment, in recognition of the event being deliberately scheduled just two days before the 18th annual World Day Against the Death Penalty.

The regime of Iran has long been the recognized as holding the record for the highest rate of executions per capita. And although the raw number of those executions declined in recent years after begrudging legal reforms, the trend came nowhere near to threatening that status. What’s more, there are signs that the annual tally of hangings is edging upward again, as Tehran struggles to cope with nationwide unrest spurred by worsening economic conditions and the regime’s continued reaffirmation of its destructive and misaligned priorities.

The regime’s relationship with the death penalty received much greater international attention in September, when human rights groups and government officials from throughout the world attempted, unsuccessfully, to halt the execution of a high-profile political prisoner, Navid Afkari. The popular, 27-year-old champion wrestler had been arrested as a result of his participation in anti-government protests in August 2018, then falsely accused of murder and tortured into providing a false confession.

Afkari was being used as a scapegoat and a warning against further protests by ordinary Iranian civilians. The international community pressured the Iranian judiciary to vacate the death penalty and grant Afkari a new trial. But several participants in Thursday’s rally argued that these criticisms were not backed up by concrete action, and that this left an intact sense of impunity within the ranks of the regime’s leadership. Consequently, the judiciary defied international appeals to implement Afkari’s death sentence just a few weeks after it was confirmed by the nation’s highest court.

This was somewhat unusual in a system that often leaves prisoners on death row for years at a time, without giving them any clear sense of when their sentences will be carried out. Iranian prisons are known to move prisoners in and out of solitary confinement many times throughout the period of detention, allowing them to believe that each of these transfers could be intended to prepare them for hanging.

The quick implementation of Afkari’s death sentence is arguably a sign that the regime is feeling sensitive to international scrutiny at this moment, but believes its best course of action is to eliminate the objects of that scrutiny in hopes that foreign powers will not continue to pursue the issue once their lives cannot be saved. And for critics of historical Western policies toward the regime, the European Union’s conduct in the wake of the Afkari execution has only proven Tehran’s assumption correct so far.

One day before the rally outside of the German Bundestag, this sentiment was expressed by various members of the European Parliament, in a virtual conference on Iran policy. One of the participants, former parliamentary Vice President Alejo Vidal-Quadras, described the offending conduct as such: “The EU did nothing. They waited until [Afkari and fellow political prisoner Mostafa Salehi] were executed, and then they tweeted their condemnation. Navid and Mostafa could have been alive today if the EU and member states had taken concrete actions to stop these murders.”

Hermann-Josef Scharf, vice president of the Christian Democrat Party in the Saarland State Assembly, was among the German lawmakers to repeat this sentiment in Thursday’s event. “The mullahs’ regime is evil and against humanity,” he said. “But words are not going to be enough. The EU and UN have the means to use sanctions against human rights violations. All these mechanisms must be used. The regime murders because it is weak, and we must use all the pressure we can against it.”

This reference to the regime’s perceived weakness was also a common refrain in the speeches that were delivered before NCRI reporters. Many appeared to simultaneously view Afkari’s execution as an example of Tehran’s impunity and its desperation. Although the regime has not faced serious consequences on the international stage, there is also no indication that the killing had its intended effect of discouraging domestic unrest in the wake of multiple nationwide uprisings.

Denizens of roughly 150 cities and towns participated in one such uprising at the beginning of 2018, leading to rare acknowledgement from regime authorities that the NCRI’s leading constituent group, the People’s Mojahedin Organization of Iran (PMOI-MEK), was leading popular demands for regime change. And after Afkari’s protest turned out to be just one of many that comprised a “year full of uprisings” spanning the rest of that year, the stage was set for an even larger nationwide uprising in November 2019, this one comprising upwards of 200 localities.

In the latter instance, regime authorities’ hysterical reaction included opening fire on public crowds, which killed an estimated 1,500 peaceful protesters. This fact was highlighted by Thursday’s speakers, right alongside the Afkari case and other instances of more narrowly targeted killing. And naturally, the staggering death toll was repeatedly cited as a reason for Western policymakers to reevaluate their approach to human rights issues in the Islamic Republic. 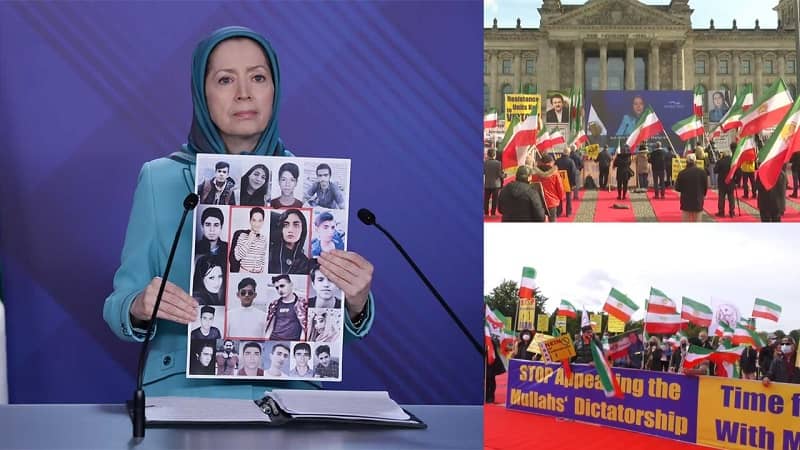 Perhaps the greatest challenge to existing Western policies came from NCRI President-elect Maryam Rajavi, who delivered keynote addresses at the events on both Wednesday and Thursday. After invoking the World Day Against the Death Penalty as an opportunity for more assertive action, Mrs.Rajavi posed the question of why European authorities “are not taking any action towards the ocean of blood flowing in Iran.”

She went on: “Is Khamenei’s cold-blooded murder of more than 1,500 people during the November 2019 uprising not a crime against humanity? Is the killing of dozens of minors and teenagers not a flagrant violation of the Iranian people’s right to life? Then, why are you sitting idle?”

Many other participants in both events accused Western powers of “standing idle” on Iranian human rights issues for the better part of 40 years. For virtually all of them, the prime example of this tendency emerged in the summer of 1988, when “death commissions” in numerous Iranian prisons began subjecting political prisoners to minutes-long “trials” for the purpose of identifying and summarily executing anyone who continued to actively oppose the theocratic system. After several months, approximately 30,000 inmates had been killed, the vast majority of whom were members of the MEK.

The NCRI’s European supporters used this week’s events to repeat their endorsement of that organization’s position regarding the need for a formal, international inquiry into this and other human rights abuses for which no Iranian officials have ever been held accountable. “What we have seen in Iran since 1988… is an ongoing crime against humanity,” said Bundestag member Christoph De Vries on Thursday, before urging his government and the EU as a whole to adopt new policies that explicitly convey the message that further such human rights abuses with not be tolerated from Iran, whether aimed at individuals like Navid Afkari or at entire coalitions like the NCRI.

I salute you, the steadfast supporters of the Iranian Resistance for seeking justice for valiant heroes Navid Afkari &Mostafa Salehi, for 1,500 protesters murdered in November 2019, &for 30,000 unforgettable heroes massacred in 1988 #StopExecutionsInIran https://t.co/j6IMv5TTVR