Mrs. Maryam Rajavi, President-elect of the National Council of Resistance of Iran welcomed the Vice President and the second lady at the Ashraf 3 museum, where she guided Mr. Pence through the 120-year history of the Iranians’ struggle for freedom and democracy.

Afterward, Mr. and Mrs. Pence attended a large gathering of members of the Iranian Resistance and expressed strong words of support for the fight and the sacrifices these people have made throughout the four decades-long fight against the clerical dictatorship in Iran. 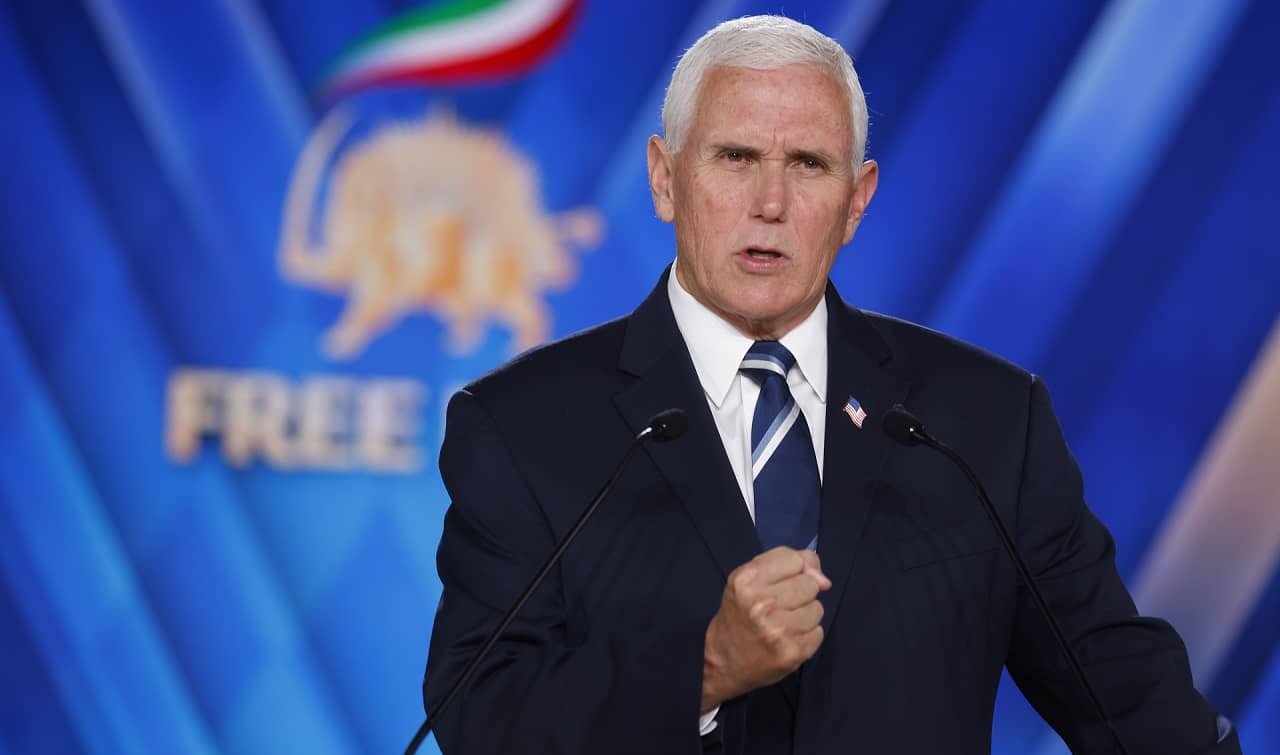 “I have traveled more than 5,000 miles from my home in Indiana to be here today because we share a common cause: the liberation of the Iranian people from decades of tyranny, and the rebirth of a free, peaceful, prosperous, and democratic Iran. Thank you all for standing strong in the name of freedom,” Vice President Pence stated.

“Today we call on the Biden administration to immediately withdraw from all nuclear negotiations with Tehran, voice support for the organized opposition in Iran, and make it clear that the United States and our allies will never allow Iran to obtain nuclear weapons.”

“I can say with certainty that the American people are with you as you stand and labor for freedom in Iran. The American people support your goal of establishing a secular, democratic, non-nuclear Iranian republic that derives its just powers from the consent of the governed.”

“Today, I join you in pledging that his crimes must not go unpunished. Ebrahim Raisi is unworthy of leading the great people of Iran. He must be removed from office by the people of Iran – and he must be prosecuted for crimes against humanity and genocide that he perpetrated thirty years ago and every day since.”

“Today, the resistance movement in Iran has never been stronger. It’s been inspiring for me today to learn more. Resistance Units in Iran are the center of hope for the Iranian people. They are an engine for change from within during the uprisings and continued protests. And every day, it’s clear they are growing stronger while the regime grows weaker.”

“Today, teachers, workers, and retirees, have courageously taken to the streets. Protests that used to be isolated and sporadic quickly spread to multiple cities. Hope is a flame in the heart of freedom-loving men and women, and that flame is burning brighter than ever before thanks to all of you. I came here to simply say, we stand unequivocally on the side of the Iranian people.”

“The regime in Tehran wants to trick the world into believing that the Iranian protesters want to return to the dictatorship of the Shah as well. But we are not confused by their lies.”

“The day will come when the ayatollahs release their iron-fisted grip on Iran and her people. A new glorious day will dawn, and a bright future will begin, ushering in an era of peace, prosperity, stability, and freedom for the good people of Iran and the world,” Vice President Mike Pence concluded. 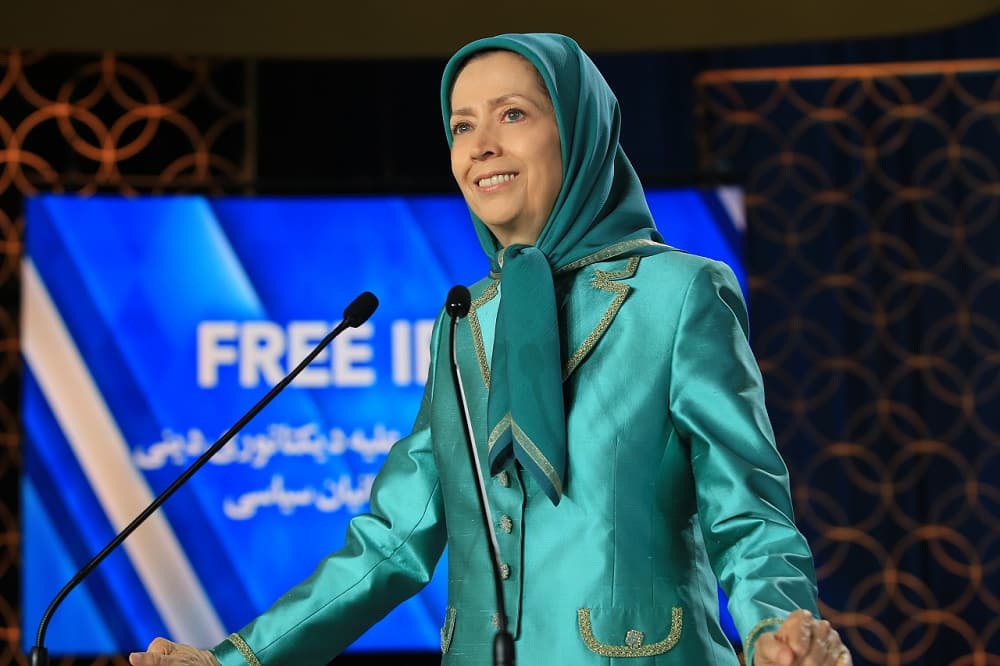 Welcoming and expressing gratitude on behalf of the Iranian Resistance, Mrs. Rajavi told Vice President Mike Pence: “Today, the world is witnessing that conditions are ripe for change in Iran and that people are ready for change. Protests are erupting with increasing intensity across the country. On the other hand, the regime has no answer except to step up repression, executions, or torture in its prisons. The people of Iran have the right to resist, much like the war of independence in America. The mullahs have occupied our country. People now chant, “Our enemy is right here; they lie when they say it’s America.”

“The Iranian Resistance set a historical example: the resistance of a nation can change the course of history towards freedom. External conditions are effective only when a fighting force on the ground is prepared to pay the price. In the past year, the MEK Resistance Units in Iran carried out more than 2,350 campaigns against the repression that paved the way for uprisings across our nation.”

“By promoting the separation of religion and state, this alternative is a solution to establish democracy in Iran and an obstacle to Islamic fundamentalism in the entire region. The mullahs’ regime has made every effort to cover up this truth. Demonizing the Iranian Resistance, censoring its news, and denying its popular support are all intended to cover up the truth. Now that all illusions about any reform within the regime in Iran have disappeared, the mullahs are investing in a non-existent Shah to divert the uprisings.”

“Tehran rulers are at their weakest point. They face the Iranian people’s uprisings for change. We can and must rid Iran, the Middle East, and the world of the evil of nuclear mullahs. The November 2019 uprising, with its rebellious cities and the Army of freedom, showed the way.”

“Today, the world clearly sees that the policy of appeasement of the mullahs has failed. This is a regime that gives a bomb to its diplomat to blow up the gathering of the Iranian Resistance where hundreds of distinguished international personalities were present.”

“The Iranian regime’s dossier on human rights violations and terrorism, particularly the massacre of political prisoners in 1988, and the crackdown on protesters in November 2019 must be referred to the UN Security Council, and the regime’s leaders must be prosecuted for committing genocide and crimes against humanity.”

“If the regime did not intend to provoke wars, its conventional army would have sufficed. Therefore, the Revolutionary Guard Corps (the IRGC) must be dismantled.

Like Ukraine, the Iranian people and their Resistance deserve international recognition and support. The war of Iran’s rebellious youths against the terrorist IRGC to overthrow the regime must be recognized,” NCRI President-elect concluded. 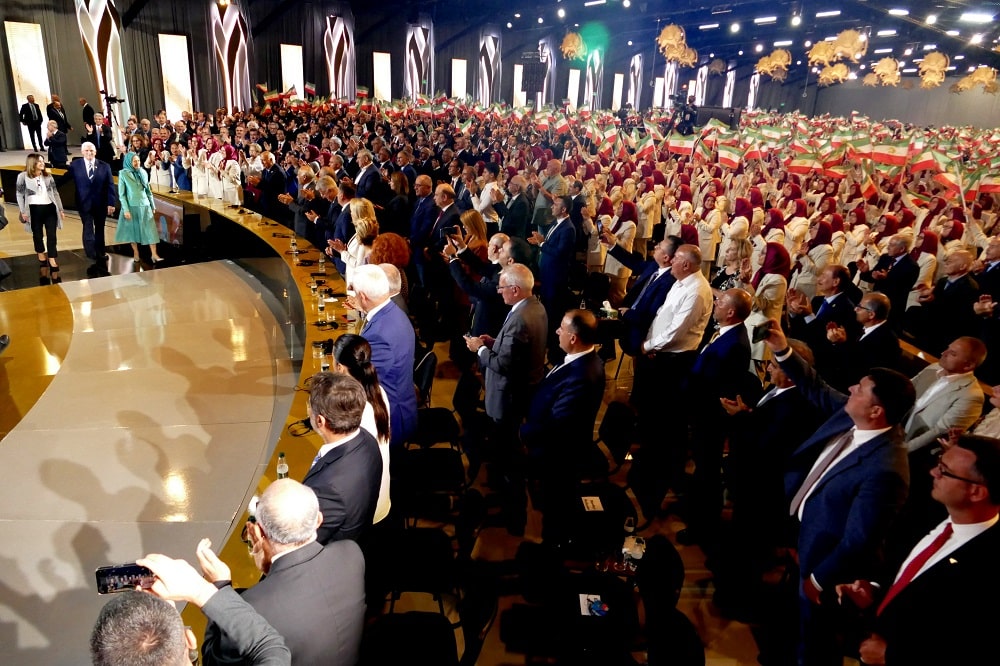