Tehran- Commemoration the martyrs of the November 2019 uprising – August 29, 2020
Following last week’s call by Mr. Massoud Rajavi, Leader of the Iranian Resistance, to commemorate the martyrs of the November 2019 Uprising during the holy month of Muharram, Resistance Units and supporters of the People’s Mojahedin Organization of Iran (PMOI/MEK) wrote slogans, posted banners and distributed leaflets in Tehran and other Iranian cities, including Karaj, Sanandaj, Behbahan, Rasht, Isfahan, Shiraz, Neyshabur, Qom, Mashhad, Ahvaz, Dehdasht, Tabriz, and Khorramabad, commemorating those fallen heroes. They also marked the 52 martyrs of the MEK, who were massacred at Camp Ashraf, Iraq by the IRGC’s terrorist Quds Force on September 1, 2013.

Some of the slogans displayed in public during last week’s campaigns included: “The only way to freedom is to rise, and revolt to obtain your freedom,” “MEK Martyrs in Camp Ashraf are symbols of perseverance and resistance. We will pursue their path,” “Down with Khamenei, hail to Rajavi,” “Remembering the martyrs of Camp Ashraf, symbols of sacrifice and resistance,” “The MEK is determined to overthrow the anti-Iranian clerical regime,” “The Resistance Units will overthrow the clerical regime,” “Down with Khamenei, hail to the MEK, hail to Rajavi,” “Massoud Rajavi: The MEK has dedicated itself to the liberation of its homeland.”

Secretariat of the National Council of Resistance of Iran (NCRI)
September 3, 2020 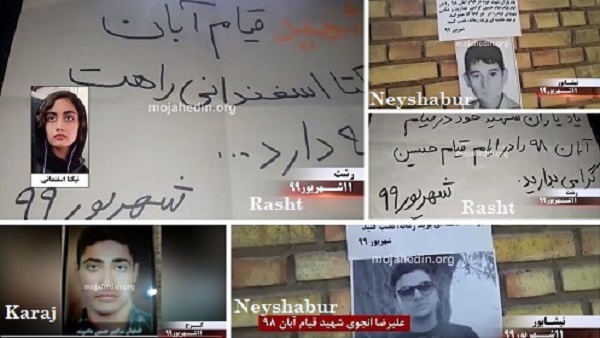