Assadollah Assadi, the Iran regime’s diplomat terrorist
The first court session for the Iranian regime’s incarcerated diplomat-terrorist, Assadollah Assadi, and his three accomplices was held on Friday, November 27 in Antwerp, Belgium. Information revealed about the case confirms Assadi’s attempt to bomb the opposition’s Free Iran rally in 2018 was state-sponsored terrorism.

Assadi, along with Nasimeh Naami and his husband Amir Sadouni, and Mehrdad Arefani, were arrested for attempting to bomb the opposition rally in Villepinte, France on June 30, 2018.

Following the Iran protests in 2018 and the Iranian Resistance’s leading role during the uprising, the regime tried to strike a mortal blow to the Resistance by assassinating Mrs. Maryam Rajavi, the president-elect of the National Council of Resistance of Iran (NCRI).

The facts above are testaments to this reality that the 2018 bombing plot was not on Assadi’s personal initiative. It was an explicit use of terrorism as a tool of statecraft.
The terrorist couple, Sadouni and Naami, offered an alibi of being intimidated into participating in this terrorist attack and having no idea they were delivering a bomb. This alibi was debunked when authorities found nearly 240,000 euros in the possession of this couple.

Assadi’s notes, found in his car when he was arrested, show the terrorist couple were indeed MOIS agents and willingly and knowingly participated in this bombing plot.

The following documents are part of Assadi’s notes found in his car by German police. Based on these notes, he briefed Saadouni and Naami during a meeting on June 28, 2018 in Luxembourg on how to use the bomb.

These documents and the chain of events necessitate the European countries to take firm action against the Iranian regime.

As Mrs. Rajavi has said: “The Iranian regime’s leaders must be prosecuted and face justice. This is an imperative and deterrent step to counter the godfather of international terrorism in our time. The European Union must designate the entirety of the Ministry of Intelligence and Security (MOIS) and the Islamic Revolutionary Guards Corps (IRGC) as terrorist entities. The Iranian regime’s intelligence agents, and the Quds Force and its mercenaries in European countries must be prosecuted and expelled. Granting political refugee status and nationality to these operatives by the European countries must be considered a red line as it would pave the path for further terrorism. European countries must shut down the clerical regime’s embassies and the so-called cultural and religious centers, which are in reality centers to coordinate terrorism and espionage.”

In his notes, Assadi has used metaphors and codes for some words such as bomb, remote control, etc.: 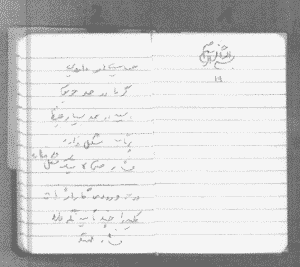 Assadi’s notes book – 1
– Charging until the light turns green or overnight charging is enough – standard 4 hours
60-hour charge storage
– Garage door bandwidth (remote control frequency) should be so low that Wi-Fi and everything else does not work that the door does not open (remote does not work automatically)
– Attendance time? 13:00? OK
– My cell phone is on from tonight and Saturday morning to evening and night 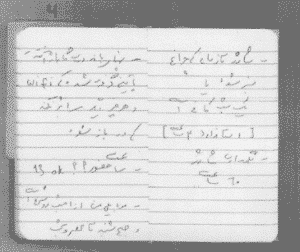 Assadi’s notes book – 2
Metaphors:
– The system itself: play Station 4 (bomb metaphor)
– T.V Charge (metaphor of bomb battery charger)
– Stand By charger light (full battery charge)
– Complete email relationship cut
– Activate new email
– Do not turn on the new phone at home at all
– Until a few months that I approve, the flight to me (Austria) or anywhere else is prohibited
– If necessary, we will come by car
– Study and research before Zartosht (probably the code of the explosion operation) is necessary 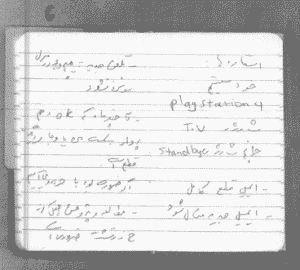 Assadi’s notes book – 3
– Dolatabad business breakfast must be studied and researched
– Business breakfast at 9 o’clock
– What is it like to move fast to get a seat?
– Remote and charge to be delivered
– New mobile + SIM card and charger
– email new (Asadi’s new number) 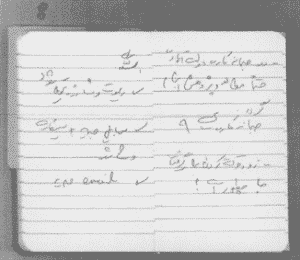 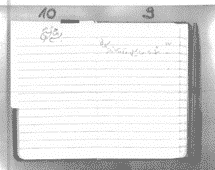