Ashraf 3 Albania October 17, 2021, Maryam Rajavi: David Amess was a great advocate of freedom and human rights
A memorial ceremony with the participation of thousands of residents of Ashraf 3, home to members of the People’s Mojahedin Organization of Iran (PMOI/MEK) in Albania, was held on Sunday, October 17, 2021, in memory of Sir David Amess.

Participants in the ceremony paid homage to Sir David Amess, the great friend of the Iranian people and the Iranian Resistance.

In her speech in the ceremony, Mrs. Maryam Rajavi, the President-elect of the National Council of Resistance of Iran, said, “I was so deeply saddened to learn about the criminal murder of Sir David Amess, a great and beloved friend of the Iranian Resistance for after three decades. All of us in the Iranian Resistance and the people of Iran have lost an exceptional friend. The British people and the world have lost a great advocate for freedom and human rights.” 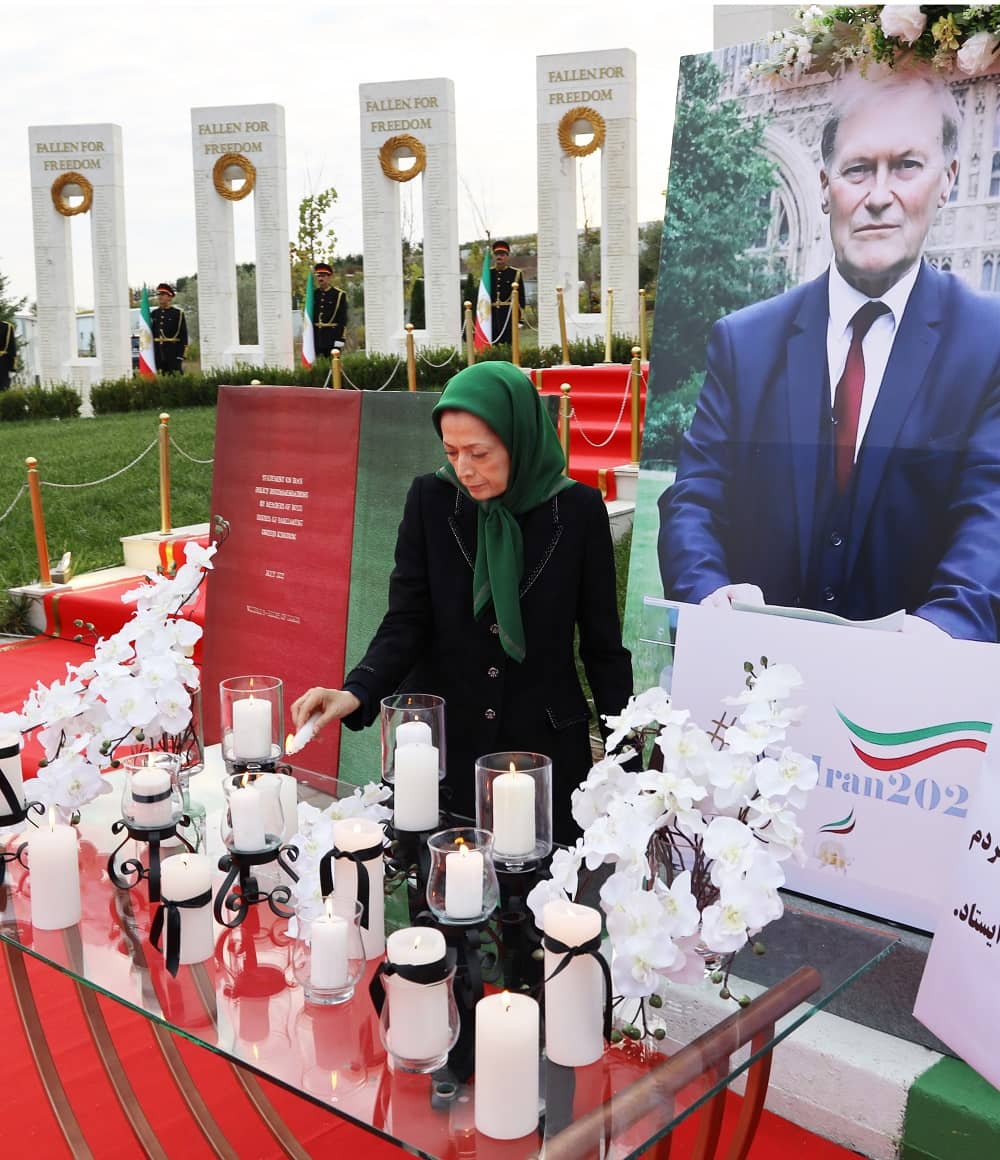 Mrs. Rajavi expressed her “deepest condolences to Sir David’s family, especially to his wife Julia, to the members of the British Parliamentary Committee for Iran Freedom, to his friends, colleagues and to the people of Britain.”

She also emphasized that “We have not gathered here to simply mourn Sir David’s demise. We are also here to celebrate his life and achievements. I firmly believe that he has now joined all those who gave their lives for human rights, democracy, and justice for which he was a tireless champion,”

“Indeed, he was the enemy of dictatorships, especially mullah’s dictatorship. Therefore, after three decades of support for the Iranian People’s Resistance, he is now among martyrs for freedom. Much can be said about Sir David’s character, his kindness, compassion, big heart, moral integrity/ principles, and values.” Mrs. Rajavi said, adding,

“In victory or defeat, in good times and bad, he would always smile and tell everyone around him to persevere. Our Resistance movement owes a huge debt of gratitude to Sir David.”

Sir #DavidAmess was an admirable symbol of advocating freedom, democracy, and among martyrs to the cause of freedom.
We are proud that he rushed to aid our people’s fight against religious fascism in the darkest period of #Iran's history.https://t.co/GIlEzCxJV2 pic.twitter.com/AdBNcu6xnL

Mrs. Rajavi said that Sir David Amess was active on many fronts, including:

– In 2007, he joined 34 of his parliamentary colleagues in the successful legal challenge to the politically motivated terrorism tag on the PMOI, which had been done at the behest of the Iranian regime;

-His relentless efforts to ensure the safety and security of Iran’s combatants of freedom, PMOI members, in camps Ashraf and Liberty in Iraq;

-And his campaign to ensure their safe relocation to European countries, including Albania,

He came to Ashraf 3 as soon as he could to pay a visit to PMOI members; indeed, they love him and miss him a lot.

Mrs. Rajavi concluded her speech by saying, “His legacy and his memory will forever remain in Iran’s history. And all of us look forward to the day when in a freed and liberated Iran; we can pay him tribute worthy of his efforts in support of freedom. Once again, I express my sincere condolences to his family, all Honorable members of the parliament and the British people.”