The heartbreaking death of Sahar Khodayari dubbed as Blue Girl, who self-immolated after facing a six-month jail term for attending a soccer match, was the latest incident highlighting the tragic plight of Iranian women in Iran under the rule of the misogynous theocracy.

Sahar’s death created a firestorm, compelling the mullahs to temporarily backtrack. Facing tremendous outside pressure, even being thrown out of FIFA, the Iranian regime finally caved in and allowed a limited number of women into Tehran’s Azadi Stadium to watch the match between Iran and Cambodia.

Fearful of the consequences of women’s presence in the stadium, however, officials limited the number of tickets sold to women. Only four sections of the stadium, totaling around 3,500 seats, were allocated to women. Azadi Stadium has a capacity of around 78,000 seats, and it can host around 95,000 spectators.

But make no mistake. As Philip Luther, the Middle East and North Africa Research and Advocacy Director at Amnesty International, said on October 9th, “Iran’s decision to allow a token number of women into the stadium for tomorrow’s football match is a cynical publicity stunt by the authorities intended to whitewash their image following the global outcry over Sahar Khodayri’s tragic death.”

Amnesty Iran
@AmnestyIran
“Iran’s decision to allow a token number of women into the stadium for tomorrow’s football match is a cynical publicity stunt by the authorities intended to whitewash their image following the global outcry over Sahar Khodayari’s tragic death” https://www.amnesty.org/en/latest/news/2019/10/iran-limited-allocation-of-football-tickets-for-women-a-cynical-publicity-stunt/ … 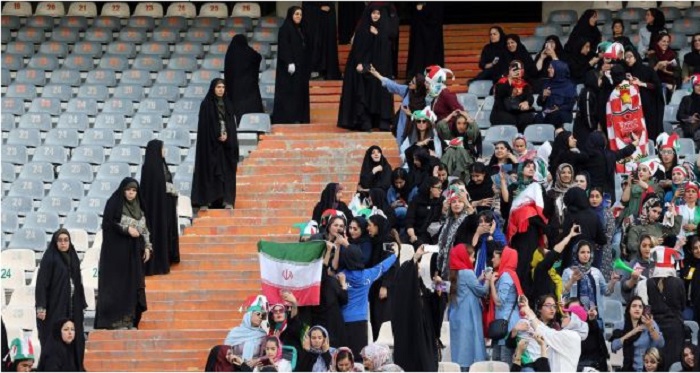 amnesty.org
115
21:07 – 9 Oct 2019
Twitter Ads information and privacy
68 people are talking about this
In truth, however, any public presence of women is seen as a threat to the mullahs’ draconian laws and edicts, whose role is to preserve the state. Tehran prosecutor Mohammad-Jafar Montazeri, had warned that “women’s presence in the football arena is a calculated move by the enemies.”

A couple of years ago, when faced with a similar demand by Iranian women to ride bicycles, the regime’s Supreme Leader Ali Khamenei, issued a fatwa, displaying the clerics’ perverted mindset, and banned women from riding a bicycle in public. “Riding bicycle often attracts the attention of men and exposes the society to corruption, and thus contravenes women’s chastity, and it must be abandoned,” the state-run media quoted him as saying.

Scratching the surface, trampling women’s rights under the mullahs’ rule runs much deeper than allowing them to enter football stadiums or riding bicycles. Denying women the opportunity to attend soccer matches is only one aspect of the systematic and institutionalized discrimination against Iranian women. In the mullahs’ medieval worldview, women are considered second class citizens. Gender apartheid was enshrined in the Iranian regime’s constitution and in the civil and penal codes from the onset of the clerical regime in 1979. It began with the forced imposition of the compulsory veil and continued with the denial of the right to divorce, to become judges or the president, to travel alone, to have access to many major fields of studies to equal share of the inheritance.

In their relentless struggle for their rights, Iranian women turned the tables on the regime and his suppressive measures. Women’s defiance was reflected in their active participation in the political struggle waged by the democratic opposition in the first two years after the fall of the Shah. Women continued their resistance by joining the ranks of the organized opposition, the Mujahedin-e Khalq (PMOI/MEK) in subsequent years. No less than 30 percent of those executed by the regime on political charges are women. Women have also placed a leading role in thousands of protests against the regime in the past few years, including in the uprising that engulfed 160 cities in late 2017 and continued well into 2018.

Maryam Rajavi
✔
@Maryam_Rajavi
Replying to @Maryam_Rajavi
So long as the clerical regime has not been overthrown, it will not let up on executions and torture. Nor will it let up on misogyny, religious discrimination, terrorism and warmongering #Iran #NoDeathPenalty #NoImpunity4Mullahs https://www.maryam-rajavi.com/en/item/maryam-rajavi-world-day-against-death-penalty …

240
14:09 – 10 Oct 2019
Twitter Ads information and privacy
236 people are talking about this
In their struggle to attain their rights, women of Iran have no doubt been inspired by their sisters in the ranks of the MEK and the coalition of the National Council of Resistance of Iran (NCRI), where women are playing the leadership role. The Ten-point plan of NCRI’s President-elect Maryam Rajavi has laid emphasis on gender equality in all aspects of life for women, including equal participation in the political leadership of the country once the mullahs are overthrown