In Iran’s southern port city of Chabahar, the prevalence of malnutrition is so high, that according to state-run IRNA news agency on January 15th, Reza Ezzatian, a Health Ministry official said, “39,000 children under the age of five in the city are currently suffering from malnutrition.”

IRNA cited Ezzatian as saying, “In the margin of the city and remote rural areas, the situation is worse in terms of nutrition and poverty.” He added, “This region and other cities in Sistan and Baluchestan Province have high rates of malnutrition. Therefore, there is a need for more serious attention in this regard.” 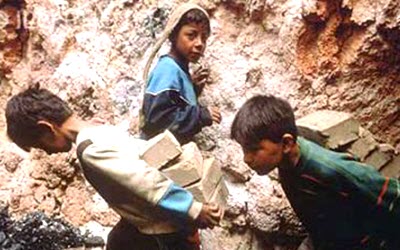 Millions of Iranian children are currently suffering from malnutrition, many experts believe, which leads to poor physical growth — such as osteoporosis — and an decrease in intelligence — including severe learning disabilities.

In Sistan and Baluchistan province children also suffer from malnutrition. And, Salamat News website reports that in the Central Zagros region, the situation has worsened to the extent that malnourishment has turned into a norm. The news outlet wrote, “Malnutrition in the Central Zagros area is completely forgotten, due to the fact that poverty has become part of everyday life amongst villagers.” Allegedly, some pupils in the area are suffering from memory loss and cannot remember their own names anymore. The children are also smaller than what would be considered average for their age.

In the Boyer-Ahmad province and villages near Tehran, including Zarafshan, Bagh-e Fayz, Mian Abad and Mousa Abad, and on the beltway near the city of Islamshahr, the people are experiencing the effects of malnutrition, as well.

In fact, new illnesses are spreading across the country — significant increases in cancer, low blood levels, and intestinal illnesses are just a few of the crises resulting from malnutrition. Statistics published in the regime’s own media outlets reveal that over six million people across Iran are suffering from osteoporosis, a disease in which the density and quality of bone are reduced. As bones become more porous and fragile, the risk of fracture is greatly increased. The disease is progressive.

Iran has the second largest natural gas reserves and fourth largest crude oil reserves. Still, 50 million Iranians live in poverty, and suffer from illness and malnutrition. At least 96% of Iranian people are said to be living in poor conditions, while a 4% minority live in wealth.

Meanwhile the Iranian regime spends money and resources backing the Bashar al-Assad regime in Syria. On January 4th , 2019, the Secretary of the Federation of Iranian Food Association, Kaveh Zargaran, told state-run Tasnim news agency that “Iran is able to supply Syria with all types of foodstuff.”

In a statement that must have been a bitter pill for poverty stricken Iranians to swallow, Zargaran added, “Despite the warm economic and political relations between the two countries, the value of Iran’s exports of agricultural and food products to Syria does not stand at a satisfactory level.”